“Pirouettes” are something we expect to see done by dancers at the ballet or during the figure skating competition at the upcoming Winter Olympic Games. But in the sky? By UFOs?

“A video made in the Los Naranjos urbanization, located in the El Hatillo Municipality, southeast of Caracas, captured the exact moment in which at least three unidentified flying objects crossed the skies of the Venezuelan capital at high speed, and carried out some pirouettes before disappearing from the scene.”

The video described above was reportedly taken at around 10:30 am on Friday, January 21, 2022, by Luis Alfredo Sanz, who claimed to UFO investigator Héctor Escalante of Ovnis en Venezuela (UFOs of Venezuela) that he was sunbathing when he decided the blue sky was pretty enough to share with his family so he took a short video of it. Sanz claims he saw nothing in the sky but blue, but upon later viewing of his phone he “noticed that there were some bright sparks."

“When making a graphic analysis of the video, presented here in slow motion, it can be distinguished that the three bodies, which are light in color with a dark fragment at one end, and have apparent wings or propellers, do not seem to have similarities. with birds or insects.”

The account posted by Héctor Escalante does not say who did the graphic analysis and includes only still images, with only one showing the non-magnified version. (See them here.) That means we have to take his word that there were three of these UFOs, they were traveling extremely fast and were too high to be drones. Unfortunately, the magnifications seem to contradict the observation that the “three bodies” do not look like birds or insects – in fact, that’s exactly what the magnifications look like. (Take another look.) Escalante provides a link to his blog, but it doesn’t appear to have the original video posted either.

It’s too bad this recording of three alleged UFOs over Caracas is not provided or better analyzed, since Venezuela has had many good UFO sightings recently and Héctor Escalante is a good source of information – he investigated one in April 2021 over Fort Tiuna Military Complex, one of Venezuela’s most important military installations, and another in March 2021 taken by a cyclist in the Venezuelan Andes. His Instagram page and blog have some other recent reports from different areas of Venezuela. Media reports on the sighting have no other information either.

Venezuela is a politically volatile country, so some of these UFOs could easily be military operations or surveillance drones. With this video claiming to capture three high speed UFOs over the country’s capital city, it would be helpful to have more information. Because of that, the needle on the UFO Meter is pirouetting between “bugs” and “drones” for now.

The Mysterious Case of the Helios Airways Ghost Plane 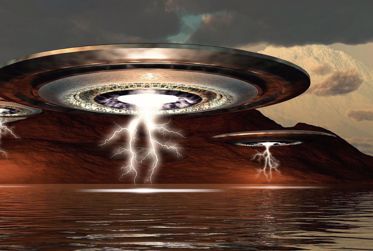