Chapel Haunted by Hellhound For Sale in Wales

Hellhound: a dog represented in mythology (such as that of ancient Greece and Scandinavia) as standing guard in the underworld. In Greek mythology this was Cerberus, a three-headed, dragon-tailed dog. (Britannica)

“ONLINE AUCTION from 8th MARCH-10th MARCH
A detached chapel which is believed to date back to the 17th Century. The building is of stone construction under a pitch tiled roof and we have been informed that it is not listed and has planning for residential conversion, the site also offers potential for off road parking.”
(Paul Fosh Auctions)

“According to local folklore, this dilapidated 17th century chapel near Cwmbran going to auction is said to be haunted by a blood thirsty black hound.” (WalesOnline)

Do you need help connecting these dots to solve this really ad idea? WalesOnline reports that a long-abandoned Welsh chapel on Waun Road, in the St Dials area of Cwmbran, will be up for auction in March. Why has it been unused for decades? Well, it could be because the cemetery in the backyard (did we mention the cemetery in the backyard?) is home to “The Black Hound of The Underworld.” Is that in the listing? 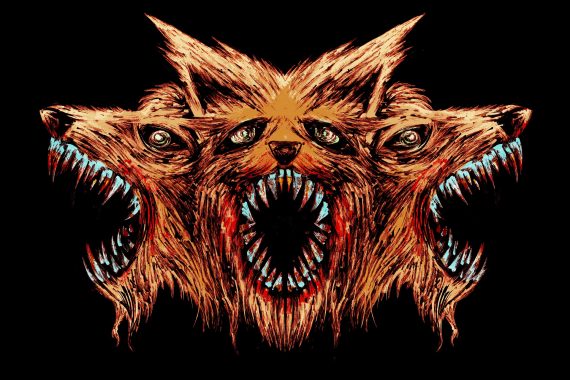 “To be sold with vacant possession.”

That means the seller agrees the property will be vacant when the buyer takes possession. Unfortunately, Welsh law does not specify what to do if the property is possessed by a hellhound who probably doesn’t want to vacate. Local mythology (courtesy of WalesOnline) tells that when the chapel was still being used for its intended purposes, a minister heard “the blood curdling baying of a hound.” Going outside to investigate, he was allegedly chased by a “great black hound.” In a brave and typical move for a man of the cloth, the minister claimed he hit the hellhound right between its glowing eyes with his Bible – causing the animal to burst into flames. As evidence, the minister was said to have shown a singed beard. While the minister's tale is the most popular, there are reportedly other sightings of this chapel's hellhound.

"I don't know about the mysterious black hound and the minister's beard but the chapel and graveyard is certainly unusual plonked as it is in the middle of the modern estate.

"Sympathetically converted It could make a lovely house or may be an unusual airbnb property. There would be no nuisance or noise from the immediate neighbours either.”

While the chapel once stood alone on a hill, it is now surrounded by a nice little suburban village and Debra Bisley of Paul Fosh Auctions assures potential buyers the neighbors are nice and will go along with whatever they plan for the property. Would they prefer the hellhound to be gone? Probably, although WalesOnline says the hellhound could actually be a 'church grim', which in English and Nordic folklore is a good dog spirit that protects the churchyard from vandals, witches, warlocks and demons.

Would you live in an old chapel with a cemetery in the back and a hellhound somewhere around?

The Strange Life of Adolphe Sax, Inventor of the Saxophone and Great Cheater of Death