Dangerous Asteroid Heading Towards Earth Disappears, Then Takes a Mysterious Turn Away

It’s dangerous to say in a headline that an asteroid is heading towards Earth because asteroid trackers define ‘potentially hazardous objects’ (PHO) as an asteroid or a comet large enough to cause significant regional damage in the event of impact – but 99% of them won’t get close for at least 100 years and ‘close’ can be 0.05 astronomical units or 19.5 lunar distances away. That wasn’t the case in January 2022.

"In January this year, we became aware of an asteroid with the highest ranking on the Palermo scale that we've seen in more than a decade, reaching -1.5."

The Palermo Technical Impact Hazard Scale referred to in a recent press release by Marco Micheli, an astronomer at ESA's Near-Earth Object Coordination Centre (NEOCC), assigns ratings to NEOs. Asteroid 2022 AE1 was above -2 which made it an object that merited serious monitoring. (Photo here.) Discovered on January 6, 2022, the first calculations showed it was 0.09 AU (13 million km or 8 million miles) from Earth, large enough to do damage, and having a serious possibility of making a potential Earth impact on July 4, 2023 – that’s next year!

"In my almost ten years at ESA I've never seen such a risky object.”

Micheli sounded the alarm and all NEO-watching eyes focused on 2022 AE1 for the next seven days as it was flagged by the Asteroid Orbit Determination (AstOD) automated system flagged it for a potential future impact. Astronomers watched as the risk potential increased daily until the seventh day when 2022 AE1 … disappeared. Wait … what?

The Moon entered a waxing gibbous phase – growing to full moon status while just 3 degrees from the asteroid – and basically blinded those trying to observe 2022 AE1. Finally, the moon moved out of the way … and the astronomers experienced a shock.

"The data was clear, confirmed the next morning by our counterparts at NASA—asteroid 2022 AE1 poses no impact risk."

That’s right -- 2022 AE1 went from full “Don’t Look Up” to “move along, nothing to see here” in seven short days. Recalibrating the numbers, the forecast is for 2022 AE1 to fly by Earth in July 2023 at a distance of about ten million km (6.2 million miles) or over 20 times the distance of the moon. What happened?

"As is often the case, the overlap with Earth remains even while the risk corridor gets smaller due to further observations and so the risk appears to increase. More often than not, as the hazard zone narrows, the small potential corridor moves off Earth and the risk suddenly drops." 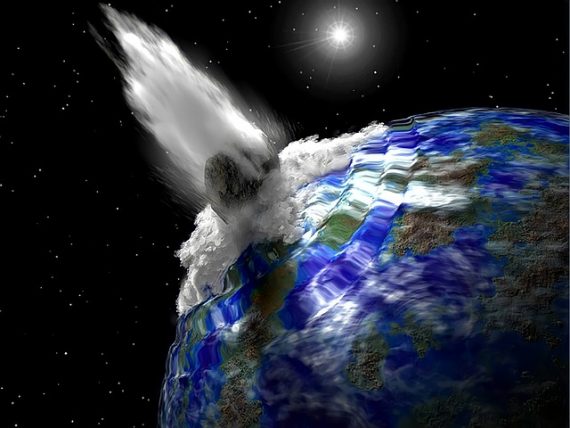 The “risk corridor” is the moving spotlight on Earth where the asteroid is most likely to hit. That spotlight is recalculated each time a new reading is taken on the asteroid -- the spotlight gets smaller as it hones in on the target area. However, it can also move … and that’s what happened to 2022AE1 while the lights were out. Luca Conversi, Manager of the NEOCC, says this actually happens all the time.

“Yet, I wasn’t too concerned as we get notifications like this – though at a lower level – a few times per year.”

A Haunted and Cursed Abandoned Ghost Hotel in Japan