From the “Don’t we have enough to worry about?” file comes news that a theoretical entity which researchers have referred as the extremely descriptive ‘wandering black hole’ is not theoretical anymore – a team of international astronomers have found one … and it’s right here in our Milky Way galaxy on a tour at speeds far exceeding those of wandering stars and planets. Will this replace ghosts, monsters under your bed and whatever is causing the Havana syndrome as the scariest thing we can’t see?

“This kind of work is incredibly important in that it contributes towards a complete census of the black hole population.” 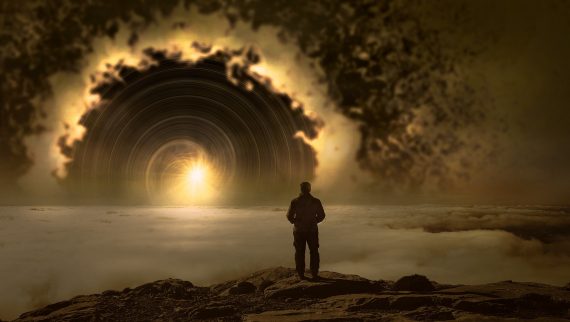 Who knew there was a black hole census going on? And how do you count things you can’t see … especially when they’re moving at 100,000 miles per hour (162,000 km per hour)? Vivienne Baldassare, a black hole expert at Washington State University, is a black hole census taker and she told Science Alert she’s thrilled to add this new discovery to her list, even though she was not part of the international team of astronomers which used the Hubble Space Telescope to find the first known wandering black hole. Located 5200 lightyears away in the constellation Sagittarius, this isolated stellar-mass black hole is the result of a decade of work that began in 2011 when the Optical Gravitational Lensing Experiment (OGLE) and Microlensing Observations in Astrophysics (MOA) independently recorded an event that peaked on July 20, 2011. They named it MOA-2011-BLG-191/OGLE-2011-BLG-0462 (MOA-11-191/OGLE-11-0462 for short) and then a team of astronomers led by Kailash Sahu of the Space Telescope Science Institute set about trying to figure out what it was.

Using gravitational microlensing – the detection of the curvature of space-time which occurs when a faint object with a gravitational field passes in front of a distant star – they made eight separate observations of MOA-11-191/OGLE-11-0462 from 2011 to 2017. When Sahu and his team analyzed this data, they were surprised to find it indicated a black hole rather than a star. The changes in the light behind it allowed them to calculate its mass and motion and determine that MOA-11-191/OGLE-11-0462 has a mass about 7.1 times that of our Sun and it’s speeding across the Milky Way at 28 miles per second (45 km per second) – far faster than anything else around it.

“Since none of the other stars are moving this fast, we think this must be because [the black hole] got a ‘kick’ during the supernova explosion that produced [it].”

Kailash Sahu sounds like he got a ‘kick’ out of being the first to discover a wandering black hole and create a great band name in the process – Supernova Kick. Vivienne Baldassare calls the discovery an “impressive” feat of observational astronomy. However, it’s stretching the limits of the capabilities of the Hubble telescope – any new wandering black holes will require the Vera C. Rubin Observatory in Chile, whose opening has been delayed until at least 2023.

Should we be worried about wandering black hole MOA-11-191/OGLE-11-0462? Not really – it’s 5200 light years away. What’s scary is that astrophysicists estimate there are MILLIONS of high-speed wandering black holes who got a supernova kick and are zooming around the Milky Way at up to 43 miles per second (70 km per second).

Don't we have enough to worry about?

Mysterious Encounters with a Vicious Evil Gnome in California