The most famous Loch Ness Monster witness these days is Irish hospital clerk Eoin O’Faodhagain, whose multiple sightings via the 24-by-7 Nessie Cam has forced the Official Loch Ness Monster Register to set up a special category for them. Long before CCTV cameras and even the "surgeon's photo," there was another famous multiple-sightings witness and the cottage above Urquhart Castle where she made many of them is up for sale. Besides being a prime vantage point overlooking Loch Ness, it has a history of paranormal activities and connections with other Loch Ness characters – in particular, Ted Holiday. Let’s meet Winifred Cary and learn about some of her 15 (or more) sightings of the Loch Ness monster.

“Then one day I was out with my brother - it must have been in 1918, and I was about twelve at the time. We were trawling for salmon, and we had gone east of the pier about a quarter of a mile. It was quite rough on the water that day. My brother was rowing and had his back to the loch, but I was facing forward. Suddenly, ahead of our little boat, a great black creature came up above the waves and then went down again. It was absolutely colossal.” 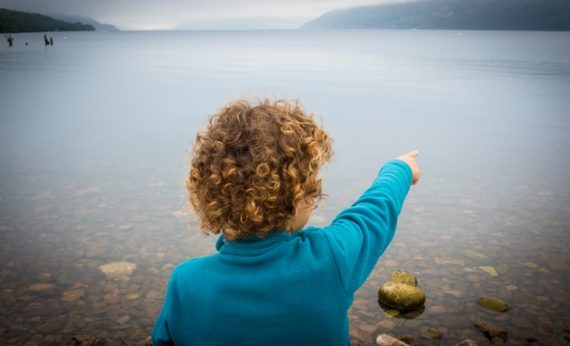 An excellent source of information on Winifred Cary is the Loch Ness Mystery blog of “Glasgow Boy.” He details the life and sightings of Winifred Cary dating back to 1918 when her family visited the loch from Edinburgh and her lifelong attachment to the creature began. Winifred bought the cottage (more on that later) in 1950 with her husband, Basil Cary. She had her second sighting in 1954 and a third that same year with Basil and their daughter Daphne. David Cooke, author of "The Great Monster Hunt," recorded Winifred making the common lament of most witnesses: “Unfortunately, none of us had a camera with us.”

“It must have been about half past one in the morning, and he looked over on the loch and he. saw two great black creatures moving toward the river mouth.”

Basil Cary reportedly is one of the unusual witnesses who saw two creatures together. The entire family and friends visiting them continued to have sightings through the mid 1960s and Winifred had an excellent memory (or diary) – detailing to Cooke and later Tim Dinsdale, author of "Monster Hunt,” the conditions, estimated distances, lighting, number of humps, times, etc. Here’s an example from 1954.

“I saw a huge black object crossing from the far side towards the Castle. It was travelling at great speed and making a terrific wash, and as it came nearer I saw a salmon leaping out of its way.”

Glasgow Boy has an excellent map annotated by Winifred showing the locations of each sighting in the loch. While the map and the accounts are greatly detailed, Glasgow Boy claims to have found a few discrepancies, but not enough to negate the value of the overall collection. Glasgow Boy also notes that Winifred Cary was a psychic believer and may have thought the Loch Ness monster was a paranormal rather than physical being. Ted Holiday stayed with the Cary’s in the home and was said to have had an encounter there with a strange man in black. He also had a famous encounter there with a tornado-like entity and a pyramid shaped column of black smoke -- Winifred Cary claimed to have also seen a beam of white light illuminating Holiday's forehead, but Basil saw and heard nothing.

Does the place where all of this and more happened – plus a great view of Loch Ness – sound like your dream home?

Glasgow Boy is convinced this is the same cottage and is currently listed at £385,000 (around $523,500). (View the listing and photos here.) Both cottages sit on one acre of garden grounds and “the views from the upstairs are second to none, across the world famous Loch Ness.” While the real estate listing doesn’t say anything about events that have happened on the property, it hints that “Viewing is essential to appreciate the location of these quirky properties.”

Operators are standing by to take your call.

Two Totally Strange Creatures, But They Both Share the Same Name