Huge Monsters on the Rampage in the U.K.? Possibly…

There's no doubt that the title of today's article is an eye-opening one. That doesn't mean it's a big joke. And, no, it's not an early April Fools' Day, either. So, with that said, let's have a look at some of those giant-sized monsters said to roam in the waters of the U.K. For me, the whole thing began in the 1980s. The tale came from a man who claimed to be a retired British police constable, who had personal knowledge of a story of truly monstrous proportions, and that focuses on dark goings-on after sunset in the British city of Birmingham in the late 1970s and early 1980s. For what it’s worth, here’s the tale. According to the man, who identified himself only by the surname of Sykes, while serving in the British Police Force (service that, he said, began in 1977 and ended in 1988), he heard two tales from colleagues of giant eels seen in the winding canals that run through the U.K. city of Birmingham – both of which occurred, he thought, around 1979 or 1980. In both cases, the witnesses had reported seeing very large creatures – the first, amazingly, around twenty feet in length, and both "very dark" in color. Needless to say, if the physical details described in the first encounter were not exaggerations on the part of the witness, then it was without shadow of a doubt, a definitive monster.

Although it wasn't until the mid-to-late 1980s I heard of further, similar stories, at the time I was working as a forklift-truck-driver in the area and heard of the tales of the giant eels of Birmingham then. I wasn't the only one who heard of the stories. In his book, A Manifestation of Monsters, Dr. Karl Shuker says of the Birmingham, Gas Street Basin: "In 1997, these waterways were said to be home to a gargantuan eel, variously dubbed the Gas Street Monster…It was described by one angler eyewitness as being black in color, 'with little beady eyes,' and up to 20 feet long…" The reason I mention this is because I grew up not far from Karl. And, as Karl knows, I too was the recipient of a number of reports of huge – and potentially dangerous – eels roaming around in the canals of Birmingham. So, to go back to the title of this article, I'm quite happy calling a 20-foot-long eel in the U.K. being titled a "monster." 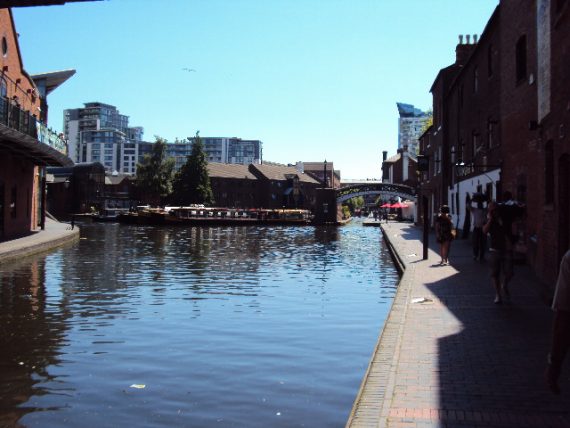 (Nick Redfern) A part of the expansive and winding Birmingham, England canals. The lair of massive eels? Maybe.

Now, we have to turn to Wales. Rhayader is the oldest town in mid-Wales. Its origins date back more than 5,000 years, and specifically to Neolithic times. Rhayader’s long legacy is also evidenced by the fact that, in 1899, a large collection of gold jewelry was found buried on the town’s Gwastedyn Hill. Archaeologists were able to date the priceless artifacts to the 5th century and link them to a princess named Rowena. She was the daughter of a local, powerful, warlord, Hengest, and someone who married a much-feared character known as High King Vortigen. Neither Hengest nor Vortigen were able to instill as much fear in the people of Rhayader as did a deadly and mysterious beast that surfaced in 1988. It was from September to December 1988 that the town was hit by a spate of mysterious animal deaths. Oddest of all: the sheep were not eaten, whether in whole or in part. The only evidence of the attacks were deep, penetrating bites to the sternum. Local farm dogs soon picked up on the scene – their wild behavior made that very clear. They picked up on something else, too; something that had previously been overlooked. In certain parts of the fields where the sheep had been killed, corridors of flattened ground were uncovered. They gave every indication of something not walking along the fields, but slithering along them.  On top of that, and as the dogs continued to chase down the scent, they were led to the banks of the 134-mile-long River Wye, the fifth longest river in the U.K. The conclusion was all but inevitable: some form of large, unknown water beast was – undercover of the night – surfacing out of the depths of the river, stealthily crossing the fields, and feeding on the blood of the unfortunate sheep. The mystery was never resolved. But, the "thing" was still a monster!

And, finally: it was a warm, sunny day in June 2015, when a large animal was encountered by a pair of amazed and frightened fishermen on the River Nene, which is located in the Fens region of Cambridge, England. They quickly shared the details of the sighting with the BBC, such was the pair’s concern for what was lurking in the waters of England. One of them said: "I enjoy going out on my boat. One day we were on our boat going up towards Whittlesey and the boat suddenly juddered as if there was something large in the water. My friend and myself looked at each other and I looked down to see what we had hit. I saw the most extraordinary thing. I saw the biggest fish I have ever seen in my life. I like boating and I like wildlife, but I had never seen a fish like this before. It was absolutely huge - it was over six-foot long. It was swimming alongside us and our boat had struck it and it was as if it was showing us the side of itself where the propeller had hit it and we could see the white flesh. My friend saw it and exclaimed 'Blimey is that a dolphin?' It was so big. We’re going to go out again this year and see if we can see it."

There was talk of the animal having been a sturgeon, which can grow to immense sizes. It is, however, unlikely that such a huge fish (which can grow to a length of eighteen-feet) could be lurking in English rivers and not be found until 2015. Although the two men did not secure a definitive explanation for what they had seen, it’s important to note that another witness came forward. Her name: Michelle Cooper. She too was so amazed by what she had seen that she decided to contact Cambridge News. It turns out that Michelle's confrontation occurred in 2014, but she had stayed steadfastly silent until the story of the two fishermen surfaced a year later. She recalled what happened all too well: "I told people about it last year and they just took the mickey but now that these anglers have seen it too I know what they mean by being terrified. I am five-foot-four-inches tall and it was bigger than me. "

All of this demonstrates that, yes, there really are large monsters lurking in the waters of the U.K.