Mars, the Red Planet: Foreseeing the Future and the Past

One of the strangest things that revolves around the mysteries of Mars is that some of the enigmas on the planet's surface seem to have an eerie way of seeing the future. Or, rather, the other way around. You'll soon see what I mean by that. Located on a specific area of Mars called Cydonia Mensae are two huge, battered and bruised structures that, for decades, have intrigued and amazed the public, NASA scientists and engineers, the media, the CIA, and psychics. And that’s just the tip of the iceberg. The most famous one of the two has become known as the "Face on Mars." As for how NASA learned of the Face on Mars – something that directly led the rest of us to hear of it, and to finally see it, too – Mac Tonnies laid down the facts: "NASA itself discovered the Face, on July 25, 1976, and even showed it at a press conference, after it had been photographed by NASA’s Viking mission probe. Of course, it was written off as a curiosity. Scientific analysis would have to await independent researchers. The first two objects to attract attention were the Face and what has become known as the 'D&M Pyramid.' Both of them were unearthed by digital imaging specialists Vincent DiPietro and Gregory Molenaar [at the time, engineers at NASA’s Goddard Space Center at Greenbelt, Maryland]. Shortly after, Face researcher Richard Hoagland pointed out a collection of features near the Face which he termed the 'City.' The ‘Fort,’ too." 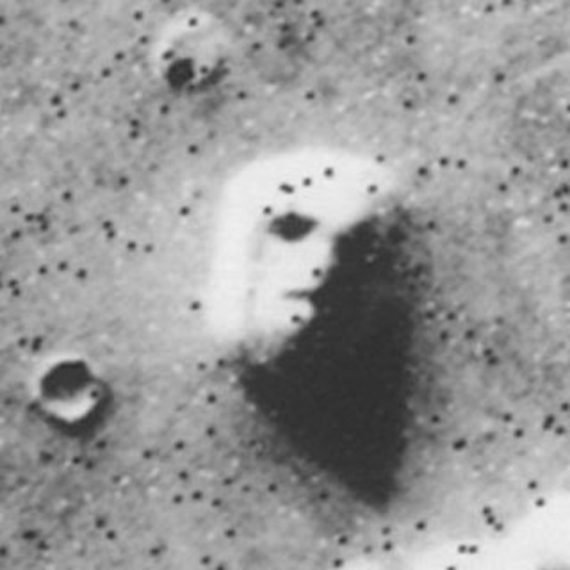 (NASA) The Face on Mars"

Now, we get to the weird part of this: the other Face on Mars; one that was "created" back in the 1950s. In one of those "you can’t make this stuff up" situations, it’s now time to turn our attentions to the connection between the Face on Mars and a legendary comic-book artist; a man who turned out to be one of the key figures in the "superhero" genre. It’s to 1958 that we now have to turn our attentions. It was in that year that Harvey Comics published a three-part production that went by the title of Race for the Moon. Although Kirby is primarily known for his distinct, and easily recognizable, style of drawing, he wasn’t just the artist on two issues of Race for the Moon. He was the writer of the story, too. Of the three stories, it’s the second comic-book in the trilogy that, for us, is the most important one of all. And, just why might that be? Because it revolves around nothing less than a giant, carved, stone head that is found on the surface of the planet Mars. It’s even referred to as "the Face on Mars" in the comic-book itself. A strange, but wholly coincidental precursor for what was to come to the fore a couple of decades later? Maybe so. There’s no doubt that there are undeniable parallels between the Face on Mars as we know it today, and the creation of Jack Kirby’s fictional Face on Mars, back in the late 1950s. Coincidence? Such a thing is certainly not impossible. Or, did Kirby have a brief glimpse at what would be seen, decades later, in the 1970s?

Now, let's turn to 1979. That was the year in which the highly successful movie, Alien - starring Sigourney Weaver - hit the cinemas. One of the creepiest critters in the movie were the Face-Huggers. Now, consider the next part of the story. Taken in July 2015 by NASA’s Curiosity Rover, one photo appears to show a strange creature that looks astonishingly like the monstrous face-invading creatures that appear in the phenomenally successful series of Alien movies. The story broke in early August 2015. The headlines were predictably sensational. The U.K.’s Metro newspaper ran with the story and titled their feature as follows: "Crab-like alien 'facehugger' is seen crawling out of a cave on Mars." Coincidence? Finally, let's get to one of the most famous of all sci-fi movies: 2001: A Space Odyssey.

How about a look at one of Mars' moons? Namely, Phobos? There's a good reason why we should discuss this tiny moon in this particular article. In 1968, the acclaimed sci-fi epic, 2001: A Space Odyssey – the work of producer and director, Stanley Kubrick – hit cinemas all around the world and raked in close to $200 Million. In the opening segment of the movie we see a tribe of primitive, early "ape-men" fighting for survival in the harsh landscape of what is now the continent of Africa – albeit in the film it plays out millions of years ago. One day the tribe awakes to find that overnight a strange, black-colored monolith has appeared in their very midst. In no time at all, the intelligence levels of the creatures are increased by, it appears, the monolith itself. The implication is that something of an extraterrestrial nature has kick-started human civilization into what will eventually be high gear. As amazing and as unbelievable as it may sound, a monolith has been photographed on the surface of Phobos. A case of fact eerily mirroring fiction? Well, that very much depends on one’s own opinion. It's time now to address an issue as weird as those you've already seen.

We have a man named Efrain Palermo to thank for bringing the next incredible matter to light. As someone with a deep interest in Mars and its moons, he decided to make an extensive review of the many pictures that NASA had secured from its Mars Global Surveyor in 1998. Palermo was amazed by what he found. He said that while studying one particular image from Phobos "…my eye caught something sticking up out of the surface." As to what that "something" was, Palermo added: "I downloaded it into Photoshop and zoomed into that area, and there it was, an apparent cylindrical shaped object casting a longish shadow and having a slanted roof." Dr. Mark Carlotto, the author of The Martian Enigmas, and someone who has undertaken groundbreaking research into the controversies surrounding the Face on Mars and the Cydonia region, took an interest in the apparent monolith. Palermo explains that Carlotto "…referred me to Lan Fleming a NASA imaging specialist who has interest in Mars and other solar system anomalies. Lan looked at it and upon further examination and study concluded as did I, that this was a physical anomaly on the surface of Phobos." Not only was this just an anomaly; it also strangely mirrored the opening parts of 2001: A Space Odyssey - namely, a mysterious monolith. Past and present blending together, and in a very strange - almost supernatural - fashion? Maybe, that's exactly what it was.

Note: NASA is an arm of the U.S. Government. Photos taken by NASA are considered to be in the public domain