In the movie The Little Shop of Horrors (and its sequel and musical), Seymour Krelborn accidentally feeds his own blood to an unusual plant he grew from mysterious seeds, and it grows to a gigantic size by feeding on whole containers of blood – i.e., humans. Despite the obvious lesson presented by The Little Shop of Horrors (and the clear warning in its name), scientists persist in ignoring both and mixing plants with human parts. The latest example comes from Sweden, where researchers are implanting artificial neurons based on human ones in a Venus flytrap. All together now: “What could possibly go wrong?” 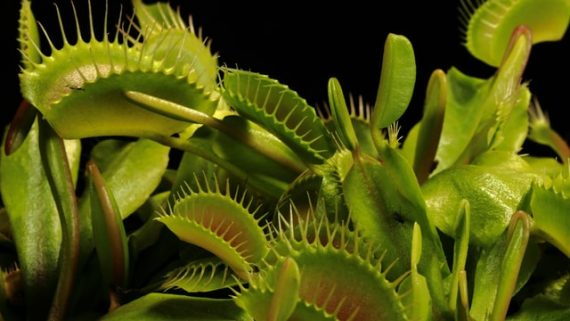 “Venus flytraps are easy to handle, and as a first demonstration, they represented an easy choice.”

They also eat living organisms, but that didn’t seem to faze Simone Fabiano, a researcher in organic nanoelectronics at Linköping University and lead author of a study published in the journal Nature Communications, explains why his team selected the Venus flytrap to test artificial neurons. The goal of the experiment was to move one step closer to integrating/implanting chips into human brains – a procedure that is extremely challenging because of the complexity and elegance of the brain’s circuitry compared to the primitive design of silicon chips. As described in Cosmos, the team’s artificial neurons use an organic electrochemical transistor that is controlled by ion concentration spikes similar to biological neurons, thus allowing them to closely simulate the electric currents real neurons use. The end result is an artificial neuron that is easier to use, less expensive to produce and more energy efficient that silicon chips. Now all they needed was something to test them on.

Wait a minute, you say … Venus flytraps don’t have nerves like humans.

Very perceptive of you. However, they generate electrical impulses called action potentials that carry the message to snap their “lobes” shut. The receiver of the electrical impulse in the artificial neuron is the tree-like “dendrite,” which transfers it to a capacitor that acts as the neuron’s cell body, building up the voltage until it reaches capacity and fires a pulse to the cells in the Venus flytrap’s lobe – snapping it shut around an imaginary fly.

That doesn’t sound so bad.

You’re right. However, what the researchers also discovered was that the artificial neuron demonstrated Hebbian learning – a theory that neurons can learn from varying stimulations and alter the power of its neural connections. In this case, it could learn to vary the signal based on the size of the Venus flytrap.

“The next step is not only to get these artificial neurons to be faster but to extend them to other, more complex biological systems. They’re already looking to test out new versions in animal models.”

The Daily Beast (an appropriate name for the site bringing this news) indicates the researchers are moving beyond plants to animals. This may be due to competition with Elon Musk’s controversial Neuralink brain-computer interface project … or Fabiano’s desire to incorporate the artificial neurons into artificial intelligence, robotics, smart labels and wearable technology.

Could this be the thing that actually goes right? We'll see.

Roswell: The First Days Were the Most Important Ones