Some Strange Encounters With Fairies and Pixies in the United Kingdom

It seems that nearly every culture on earth has its own stories of little people. All across the world, in almost every culture there have long been reports of so-called “little people,” and it is so common throughout geographical or cultural divides that it is a phenomenon in and of itself. Gnomes, Elves, Trolls, Fairies, Pixies, Duendes, they go by many names, and curiously they tend to share not only vast similarities in the general appearance of such creatures, but also the genuine sightings reports from these places that seem to pull these entities out from the realms of pure fantasy or fairy tales and into the real world. One region that has long been a wellspring of myth, legend, and lore on various types of mystical little people is the United Kingdom, yet far from remaining confined to the pages of fairy tales, there have been many recorded supposed real encounters here with such creatures.

Our first strange case takes us all the way back to 1862, when one day in August of that year, two men by the names of David Evans and Evan Lewis were riding along in their wagon past a place called Cwn Dwr farm, in a quaint, rural area near Llanwrda, Wales. As they passed through the quiet, placid countryside and looked out over the sea of wheat fields, they saw something ahead that they at first took to be stacks of wheat gathered by the reapers out in the field. When these stacks started to move and walk along a winding path, it was assumed that these must just be field workers, but things would get stranger as they approached. When they got closer, they could see that the figures were actually tiny and child-sized, all dressed in the same odd clothing, and they appeared to be marching towards the top of a small hill.

When the mysterious figures reached the top of the hill, they then began to do some sort of dance, dancing about in a circle and then taking up a sort of spiral pattern as they moved around and around. After some time of this, each of the little people moved towards the center of the spiral and appeared to just vanish into the ground below, as if being swallowed up by the earth itself. The two men looked on in astonishment as one by one the figures went down into the earth to disappear, until none were left. After a few moments, the figures began to emerge again, climbing up out of the ground as if from nowhere and doing their mysterious dance once again. Again they danced about for a time before each one once again moved to the center of the circle to vanish until they were gone. This time, they did not reappear, and when Evans and Lewis investigated the spot they found the ground undisturbed, with no holes or any explanation for where the figures had gone. When they got back to town and told a local, the man took on a somber expression and said that what they had seen were fairies called the Tylwth Teg, who were known dance in the area.

From 1884, we have a tale from the Isle of Man, which lies out in the Irish Sea between Great Britain and Ireland. According to the tale, a mail-cart driver was doing his rounds one evening collecting and delivering mail when he came upon a very unusual sight. There crossing the road was a line of what he called “fairies,” all dressed in red outfits and carrying little lanterns. When they saw him, they allegedly quickly surrounded his cart and began tossing the mailbags onto the ground, after which they began dancing around the bags. Flustered and not a little spooked, the driver tried to load the mailbags back into the cart, but every time he did, the fairies supposedly went and threw them back out onto the road. This apparently continued on until dawn, when the mischievous little creatures left him and disappeared into the woods.

A few years later there was the case of a Mrs. G. Herbert, who was just 7 years old at the time of her bizarre experience. According to a letter she would write years later to the Transactions of the Devonshire Association in 1928, she had one day been out on a walk near Shaugh Bridge, in Dartmoor, England, when she saw a tiny little man only around 18 to 24 inches tall lounging about under an overhanging boulder. The diminutive man was described as wearing a doublet, a pointy hat, and “little short knicker things,” and his face was ancient looking, with wrinkly brown skin. The little man, who she called a “pixie,” then allegedly stared at her for a moment and then just vanished into thin air. Rather interestingly, Mrs. Herbert would apparently have another pixie encounter in 1925, when she had been riding a horse on the moors of Dartmoor, England, in a place she knew very well, and had been overcome with a confusion as to where she was despite riding there every day, which she blamed on pixies using their magic to disorient and confuse her, a condition she called being “mazed” or “pixy-led.”

Moving along into the 1930s there is a remarkably strange case that supposedly happened in 1937 and was first published by Hungarian parapsychologist Nandor Fodor in his book Between Two Worlds. In the story, the unnamed young woman was staying at an old house near the Cotswald Hills in Gloucester, England, and was one day out in the adjoining garden enjoying a fine sunny day. She decided to venture out into a nearby wood called Birdlip Beeches and lie down on a knoll in a meadow, and that was when she felt something tugging insistently at her hair. When she reached around to see what it was, she was shocked to find that it was a “dreadfully ugly, misshapen, and wrinkled” little man standing a mere 9 inches in height and with skin that was “a yellow-brown color like dead aspen leaves.” This hideous little creature seemed to be tangled in her hair and trying to get free, and as he did he admonished her for being there and bothering him and his people. He was finally able to pull himself free from the woman’s hair and complained one more time about how dangerous that had been for him before evaporating into thin air. The young woman would later learn that Birdlip Beeches was well-known for harboring mischievous and ill-tempered fairy folk. 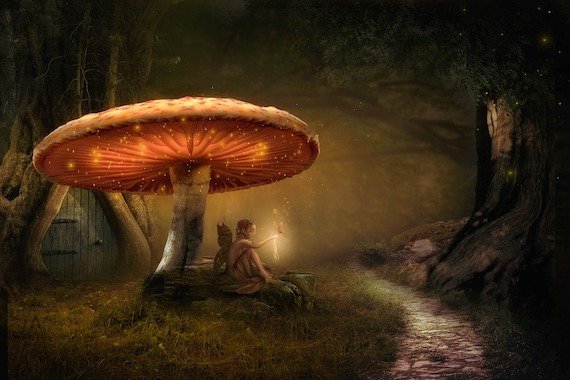 Next there is the case of a Mr. E.J.A. Reynolds, which apparently happened to him during World War II when he was just 10 years old. In 1948 he was staying at a country house in Horsham in Sussex, England, after evacuating London in order to flee the Nazi bombing going on there. One warm summer evening he was out trapping rabbits when a hairy little man standing just 18 inches high stepped out from a bush, with disproportionately long arms and a wizened old face and brown leathery skin covered with scraggly rough hair. Reynolds crouched down behind another bush and watched as this curious little hairy man walked about as if looking for something and then wandered off out of sight. A few days later, Reynolds would see the same strange little man walking across a lawn in broad daylight. What was this creature? Who knows?

In even more recent years we have a case from the September 1975 issue of the Journal of the Society for Psychical Research. According to the account, in 1973 children's book author Mary Treadgold was riding on a bus on the Isle of Mull off the coast of Scotland, when the bus stopped momentarily to let a car pass. As she stared out the window, she noticed a little figure about 18 inches tall and with pale, almost luminescent skin and “a thin, keen face, tight, curly brown hair, and wearing a bright blue 'bib-and-braces' and a very white shirt.” The tiny man was described as being very well proportioned and looking like a normal man despite his small stature, and was “not a child, dwarf, or midget.” Beside the tiny man was a sack, in his hand was a miniscule little shovel, and he appeared to have been in the act of digging but was now “frozen like a bird or squirrel on the approach of something alien.” Before she could really process what she was seeing, the bus started moving again and she lost sight of what she was convinced was a fairy.

Also from the 1970s are two accounts from 1977. The first concerns a sighting made by a police officer by the name of David Swift. In the very early morning hours of August 9, 1977, Swift was on patrol near Stonebridge Avenue in Kingston-Upon-Hull, England, when he noticed what looked like a thick cloud or fog that was moving across a nearby field. Thinking it might be smoke from a fire, he went to investigate and saw there through the mist three smallish figures dancing about in a circle. Upon getting closer, he saw that there were two women wearing bonnets, shawls, and white colored dresses and a man in a sleeveless jerkin and tight fitting trousers. The clothes looked very old-fashioned and it was quite the bizarre scene as they threw their hands up and danced about, then after a few moments they simply disappeared right in front of his eyes. 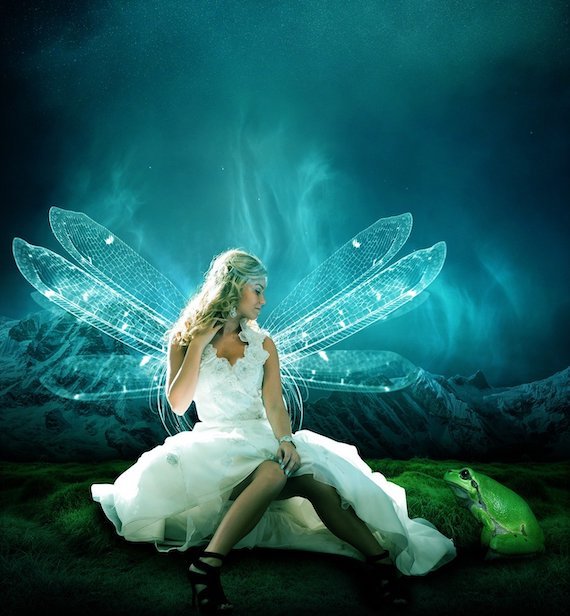 Again in 1977 there is the case of Cynthia Montefiore, of Somerset, England. On this day she was out with her mother in their garden taking cuttings from a rose tree when suddenly the mother stopped and motioned for Cynthia to be quiet. She then pointed to a small figure of a woman, only about six inches tall, which was hovering in the air with “brilliantly colored diaphanous wings resembling those of a dragonfly.” The tiny winged women was described as having pink skin and long silvery hair, and in her hand was a miniscule little wand with a small light on its tip. This strange creature buzzed around some flowers pointing her illuminated wand at them, her little wings beating rapidly like those of a hummingbird, before suddenly vanishing. Interestingly, they would also see an 18-inch tall, “sturdily-built,” brown skinned hairy man wearing a one-piece brown suit lurking around the property on several occasions.

This has only been a small selection of some of the many, many other such cases out there, some of them coming often from very reliable sources, and extending beyond boundaries to many other parts of the world outside of the UK. It seems like pretty much anywhere you go you are able to find such bizarre accounts, and it all really occupies its very own corner of the world of the weird, suggesting that this is not merely the stuff of bedtime stories and fairy tales, something perhaps beyond pure myth and folklore. Is there anything to such accounts at all, and if so then what kinds of forces are we dealing with here? These are things we may never know and are perhaps not meant to ever know, with such sightings being fleeting peeks into a world hidden from us and never meant for our eyes. Or maybe it is all tall tales and the imagination. Either way, such cases are truly bizarre, and really get the mind going.