The 1950s-Era Space Brothers: Are They Still Around?

As someone who has a deep interest in the 1950s-1960s era of the so-called "Space Brothers" (aliens looking very much like us, apart form the long hair), I was recently asked an interesting question a couple of days ago. It went like this: Do people still see the Space Brothers? That is a very good question. Certainly, the 1950s were the times when those human-like alien beings were at their peak. And, while there were still a fair number of reports in the 1960s, too, there was a definite decline of such reports onward. And the numbers of cases most definitely dropped off in the 1970s. But, what about after that? Well, I have to say that even the 1980s are now a long time in the past when it comes to to the Space Brothers. There was, however, a certain case from late December 1980. Alan Godfrey’s 1980 alien abduction in Todmorden, Yorkshire, England, was a classic incident. The story got even stranger, however, when Godfrey went under hypnosis to try and figure out what had happened during that period of significant missing time. While undergoing hypnotic regression, Godfrey said that aside from seeing a human-looking, alien entity on-board the craft, he also encountered something like a large black dog!

As for Godfrey’s UFO encounter, it occurred undercover of darkness, in the pre-dawn morning of November 29, 1980, while he was out on patrol in his police-car. As he drove along one particular stretch of road, Godfrey was amazed by the sight of what he first thought was a bus positioned oddly in the road. As Godfrey got closer, however, he could see it was something else entirely. It was actually nothing less than a somewhat egg-shaped UFO. There then followed an experience that contained certain, key elements of the UFO phenomenon, such as missing-time, and recollections of being taken on-board a craft. However, the entity Godfrey was confronted by on the craft was not the typical black-eyed, dwarfish "Gray." Rather, it was a human-looking figure dressed in a long gown and sporting a beard. In that sense, there was more of a "Contactee"-style component to the incident. There is, however, one fascinating story that surfaced as late as the 1990s.

In a March 2009 article titled Dog Walker Met UFO “Alien” With Scandinavian Accent, journalist Sarah Knapton wrote in the pages of Britain’s highly-respected Daily Telegraph newspaper that the British Ministry of Defense had then-recently released into the public domain – via the terms of the nation’s Freedom of Information Act – a number of formerly-classified files on UFOs. One of those files, said Knapton, detailed the account of "a dog walker claimed she met a man from another planet who said aliens were responsible for crop circles." So the story went: the anonymous woman had telephoned the Royal Air Force base at Wattisham, Suffolk, in a state of considerable distress, and with a remarkable tale to tell. As the woman told the operator at the base, the incident in question had occurred while she was walking her pet dog on a sports-field close to her home near the city of Norwich at about 10.30 p.m. on the night of November 20, 1989. She had been approached by a man with a "Scandinavian-type accent," who was dressed in "a light-brown garment like a flying suit."

Royal Air Force documentation on the case notes the following: "He asked her if she was aware of stories about large circular flattened areas appearing in fields of wheat, and then went on to explain that he was from another planet similar to Earth, and that the circles had been caused by others like him who had traveled to Earth." The man assured the woman that the aliens were friendly; but that "they were told not to have contact with humans for fear that they would be considered a threat." Quite understandably, the woman said she was "completely terrified" by the encounter, and added that after about ten-minutes the strange man left. But things were not quite over: as the woman ran for the safety of her home, she heard a "loud buzzing noise" behind her, and turned around to see "a large, glowing, orange-white, spherical object rising vertically" from behind a group of trees. The Royal Air Force operator who took the statement from the woman said the conversation lasted about an hour and described it as a "genuine call."

There's no doubt that both the Alan Godfrey incident and the 1989/Crop Circle affair investigated by the U.K.'s Ministry of Defense had Space Brother overtones attached to them. I have to say, though, that while the Space Brothers are not completely gone, there is no doubt that they are on the wane. Unless, of course, you just might know better. 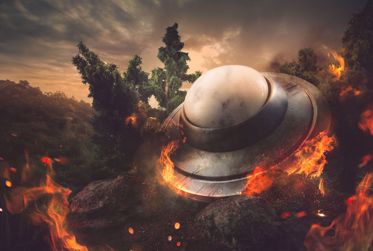