Demons in some form or another are prevalent throughout history and across cultures, taking on a wide variety of forms, and for as long as we have believed in such entities there have been efforts to try to combat them. Throughout the era of China’s Han dynasty through the Tang dynasty (3rd century BCE to 10th century CE), one supernatural threat that was taken very seriously was that of demons and various evil spirits. Chief among these were malevolent spirits or demons known as wangliang, which are prominent throughout Chinese mythology and folklore and take a good many forms. Perhaps the most feared of these were those thought to infest homes to cause diseases and illness, as well as the dreaded fangliang, a type of earth demon said to eat the livers and brains of corpses. At the time, such demons were thought of as very real and, like in many other cultures, in China there were measures taken to protect against these sinister forces. One of these was the recruitment of ritual exorcists called the fangxiangshi, which variously translates as "one who sees in all directions", "he who scrutinizes for evil in many directions", and "one who orients unwanted spirits in the direction to which they belong.”

Originating in the late Eastern Zhou dynasty (771-256 BCE) and used throughout the Han and Tang dynasties, the fangxiangshi was always a male, and he is typically described as a shaman or medium employed in an official capacity for the emperor for the purpose of driving demons away. The typical description of the fangxiangshi was of wearing a bearskin with four golden eyes, festooned with protective amulets and charms, and carrying a lance and shield. It was said that the purpose of the bearskin was to ward off demons of pestilence, and the lance and shield were weapons with which to fight off the flesh eating fangliang demons. The main duty of the fangxiangshi was to drive away evil spirits from homes and protect funeral processions from flesh-eating demons, as well as to play a prominent role in the seasonal Nuo ritual, also called the “Great Exorcism,” which was an annual concerted mass exorcism of demons. One early account from the Han Dynasty says of the fangxiangshi:

In his official function, he wears [over his head] a bearskin having four eyes of gold, and is clad in a black upper garment and a red lower garment. Grasping his lance and brandishing his shield, he leads the many officials to perform the seasonal exorcism (Nuo), searching through houses and driving out pestilences. When there is a great funeral, he goes in advance of the coffin, and upon its arrival at the tomb, when it is being inserted into the burial chamber, he strikes the four corners of the chamber with his lance and expels the Fang-liang. 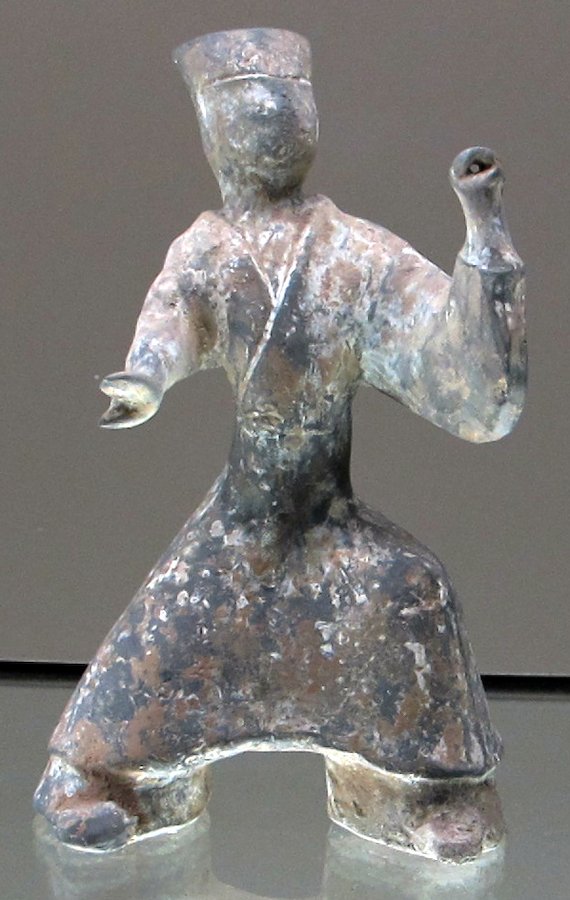 To conduct these duties, the fangxiangshi often had an entourage of various assistants. For instance, in the 3rd century BCE manuscript Zhouli, or "Rites of Zhou," the official description of the fangxiangshi’s attendants include “4 kuángfū "crazy men; mediums", 8 diviners with 6 subordinates, 2 accountants, 2 scribes, 2 menials, and 20 runners.” The exorcisms themselves could be either simple affairs such as saying some spells or chants to chase a demon from a house, to more elaborate rituals, involving a great many people, notably during the annual Nuo great exorcism. Although the methods employed could vary, one description of such a ritual from the 5th century Book of the Later Han explains:

One day before the sacrifice of the end of the year the great nuo is celebrated, called expulsion of epidemical disease. The ritual of it is the following — From among the apprentices of the inner Yellow Gate of the Palace, one hundred and twenty of ten, eleven or twelve years are selected to act as 'lads'; they are dressed with red bonnets and black coats, and they carry large hand-drums. The fang-siang shi with four eyes of gold and masked with bearskins, wearing black coats and red skirts, grasp their lances and wield their shields. There are also twelve animals with feathers or hairs, and with horns. These people start their work at the inner Yellow Gate, under command of a Chamberlain in general employ, to expel maleficent spectres from the Forbidden Palace. Shortly before dawn, the 120 boys and all the court officials gather together and repeat a chant listing 12 demon-eating spirits. These twelve divinities are herewith ordered to chase away evil and misfortune, to scorch your bodies, seize your bones and joints, cut your flesh in pieces, tear out your lungs and bowels. If you do not get quickly away, the stragglers among you will become their food.

Now the fang-siang are set to work. Together with those twelve animals (representing these twelve demon-devourers) they lump about screaming, making three tours round about the inner Palace buildings in front and behind, and with their torches they escort the pestilential disease out of the front gate. Outside this gate, swift horsemen take over the torches and leave the Palace through the Marshal’s Gate, on the outside of which they transfer them to horsemen of the fifth army-corps, who thereupon drive the spectres into the Loh river. In every mansion of the official world, men with wooden masks and representing animals may act as leaders of the performers of the nuo. When the ceremony is finished, keng of peachwood are put up, with Yuh-lei and ropes of reed, after which the performers and the officers in attendance on the throne stop their work. Ropes of reed, lances, and sticks of peach wood are presented by the emperor to the highest ministers, commanders, and special and general feudal rulers.

During the Tang dynasty, which is often seen as a sort of golden age in Chinese history, the traditions evolved and changed a bit, and although the basic duties of the fangxiangshi remained the same, the ritual was more codified and precise, with certain stringent requirements laid out in detail. The manuscript Great Tang Ritual Regulations of the Kaiyuan Era describes this as follows:

Behind the carriage in which the soul-tablet was conveyed, came the carriage of the fang-siang, which, however, was to be replaced by a carriage with an ugly head at funerals of officers of any grade below the fifth. Four fang-siang were to be used, with four precentors chàngshuài, "song leaders", and by chiefs of first class governments sixty lads besides; chiefs of governments of the second or the third order might employ forty lads, and in the districts no more than twenty lads might be employed, with one fang-siang and one precentor; besides there might be four drummers and four whip-bearers. The lads should be between twelve and sixteen years old, masked, and arranged in four groups of six, and that, besides the whip-bearers, drummers and trumpeters, there should be two wu [shamans] in the procession. The exorcising song was to the very letter that of the Han dynasty. Such purification of official mansions and cities was to be accompanied by a sacrifice at the gates to the yin spirits, and concluded by burial of the sacrificial flesh and wine. 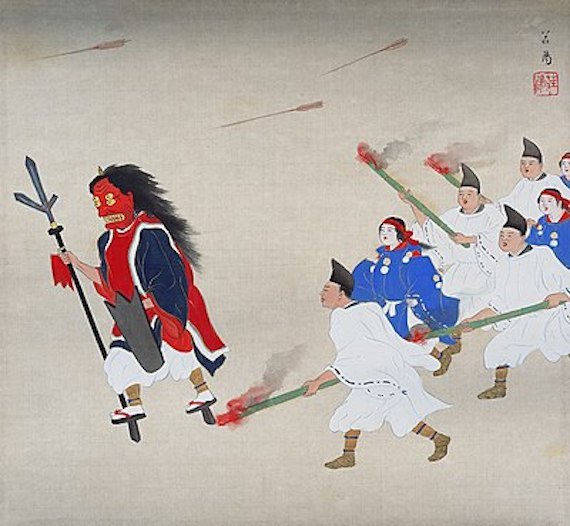 The use of the fangxiangshi began fading at the end of the Tang dynasty, after which the official Chinese state religion discontinued the practice and it was largely relegated to folk religions. However, the tradition lived on in myth, legend, and folklore, as well as appearing in music, stage, and literature. Notably, the fangxiangshi live on as a masked character in Chinese Nuo opera, and right up to the present day there are still certain individuals who privately practice the rituals. Additionally, the fangxiangshi have also influenced other similar traditions in other countries. There are the Japanese hōsōshi, who are traditional exorcists highly influenced by their Chinese counterparts and who also wear masks to lead funeral processions and exorcise demons from burial mounds, as well as perform other exorcism duties. In Korea, there is the narye exorcism rite carried out by masked exorcists three times a year to ward off evil spirits believed to be responsible for disease and social and personal disasters. The narye evolved to become more of an entertainment and celebratory event carried out by masked performers, and has had a great influence on Korean folk culture and entertainment customs. To this day one can still find fangxiangshi plying their trade on the fringes, showing that the practice still lives on even thought it is now mostly confined to legend and the mists of time. It is all an intriguing peek into the history of one culture's attempts to subdue the perceived evil forces that surrounded them, and a unique era of Chinese history in which demons roamed the land.

A Fiery-Eyed Monster in the Woods of England: Be Careful