The Paranormal, the Supernatural, the Occult, the Cryptozoological and the Ufological: It’s All the Same

Many decades ago, John Keel astutely stated that if we looked carefully we would see that all of the "Fortean" mysteries of our world were interconnected. If Keel was still alive he would still be saying it. I have to admit that from when I was a kid and into my late teens, I thought that it was just coincidence (is there such a thing?) that a UFO might be seen near a lake-monster, or a Bigfoot was encountered near a Man in Black. Certainly, by my twenties I was sure there was something weird going on. Although there is no doubt, at all, that The Mothman Prophecies is Keel's most famous book, it's UFOs: Operation Trojan Horse and The Eighth Tower that really caught my attention, as I feel that it's these two books that get to the heart of why a Sasquatch and a ghost can be seen in the same area, or....well, you get it, right? So, for those who still think that Bigfoot is just an unknown ape, and that because there are UFOs over Nessie it's just a coincidence, I'll show you some perfect examples of wild, bizarre activity. We'll begin with a man who is known for kick-starting the Men in Black phenomenon: Albert Bender. Forget the "secret agent"-type MIB of Hollywood (that's Tommy and Will). The real MIB are clearly paranormal in nature. There's a reason why I say this.

A decade before Bender got caught up with the Men in Black, he was already working in the realm of the occult. The Bender family had a ghostly Woman in Black in the family. Albert was a regular user of the Ouija Board. And then the MIB arrived and Bender fell sick: stomach problems, fears of cancer, pulverizing migraines, nightmares and a life then thrown into a world of chaos and terror. It all went away when his love, Betty, arrived on the scene. Bender and Betty married - and stayed married for decades. Bender knew when to get out of it all. He did the right thing: he just wasn't tough enough to take on manipulative, paranormal entities from who knows where? Now, let's get to Bigfoot. While most monster-seekers are of the opinion that the creatures are just unknown apes. I say "No." There are a lot of very weird things about these large, hair-covered beasts. They have turned invisible before people. They have the abilities to briefly disable people by the use of sound waves. People hear the creatures talk to them - in their heads, no less. Then, there's Stan Gordon. He's a longstanding researcher of the Bigfoot controversy and the UFO issue. Check out Stan's excellent book, Silent Invasion. It's the best book to demonstrate how, and why aliens - and unknown apes - should be seen together.

Now, let's take a trip to Loch Ness. It's a huge body of water: roughly 22-miles long, 700-feet deep, and almost a mile wide. And the water is peat-dark. Every year, a dozen or so people have intriguing sightings of the monster(s). Lesser well-known is the fact that Loch Ness is a hotbed for UFOs and aliens. Here is one very odd case - and that's putting it lightly. We have to go back to 1973. That's when Ted Holiday (who prowled the loch from the huge expanse of water from the 1960s to the 1970s) realized that the world of Nessie was far stranger than it seemed to be. Holiday had nothing less than a run in with an MIB near the shores of Loch Ness. The dark-attired figure de-materialized in the blink of an eye. The strangeness continued: when Holiday kept on immersing himself into the world of Loch Ness, he began to get wild synchronicities. The names "John Dee" and "Edward Kelly" kept popping up in conversation - and also in totally random fashion. And, if you don't know who those guys were, you really should. Aleister Crowley had a home at Loch Ness: Boleskine House. Check out their Crowley connection, too. Now, we are heading off somewhere else: The Cannock Chase cemetery in central England (only a short drive from where I lived as a kid) has been the site of Dog-Men, Bigfoot-type creatures, phantom black dogs, and Alien Big Cats. Not only that: even the Black-Eyed Children and a Tulpa-version of the Slenderman have been seen roaming around at night in the cemetery. And occasionally at day. 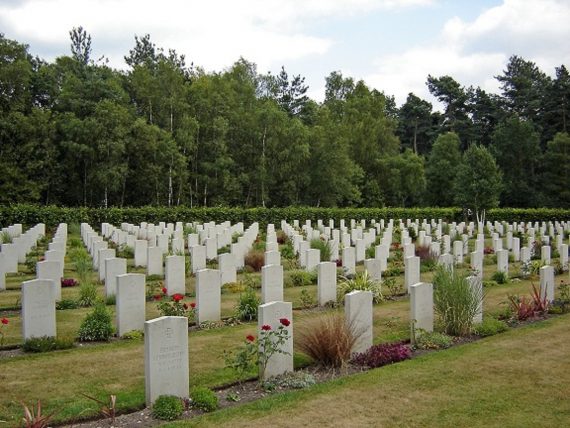 I could go on and on. And on. But, by this time, I'm sure you see where I'm going. The fact is that - under normal circumstances - it's just not feasible to have a UFO hovering above a Bigfoot. That UFOs have soared over the world's most famous loch is too much to ask for - unless you are open to certain alternative ideas, as I am. And to have so many different "things" prowling around the aforementioned German cemetery is just beyond reality. Or, rather, the unreality we actually live in. So, in conclusion, do what I did around my late-teens/early twenties and don't ignore the weirdness on our planet, because it's within the weird side of all this that the real answers can be found. Or, at least, some of them.