As you'll know, every now and again I'll write a review of a forthcoming book on the kinds of subjects that the readers of Mysterious Universe gravitate to and are guaranteed to read. That includes me, too. With that said, here's my review from the new book by a long-time pursuer of all-things strange, Stan Gordon. You may have read Stan's classic, Bigfoot/UFO-themed book Silent Invasion, which places the legendary giant apes with nothing less than extraterrestrials and UFOs. Now, Stan has a new book for you to get your teeth into. Its title: Creepy Cryptids and Strange UFO Encounters of Pennsylvania. As you may know, Stan - who has spent his life in Pennsylvania - has been recording the weirdness in his home state for a very long time. And that weirdness is piling high. Now, with that said, let's get to the heart of Stan's new release. A page-turner it certainly is! Let's begin with the aforementioned creature known to most of all us as Bigfoot. 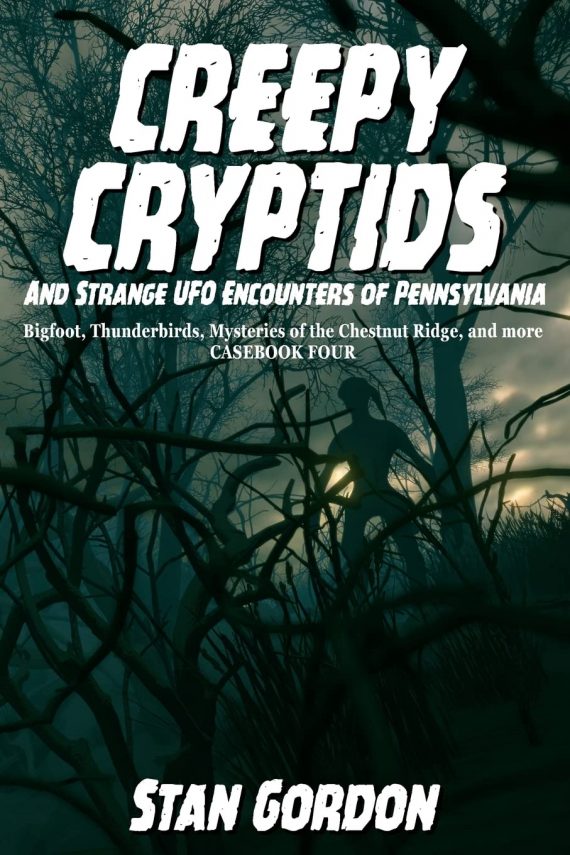 Like me, Stan is someone who has come to believe there is something about the Bigfoot creatures that takes things far beyond what we can fully understand. In Silent Invasion, Stan tells of UFOs and Bigfoot seen together, and of the immense animals suddenly vanishing in the flick of an eye. And I do mean vanishing. It's intriguing to note that such strange activity is still going on. For example, Stan tells of a local family who came across what looked to be large, Bigfoot tracks. There was something else, however: the tracks appeared to vanish, just as, bizarrely, as the the creature itself did. In Stan's own words: "The family was startled because the tracks seemed to just suddenly appear in the yard with no entrance point, then continued on about seventy feet across the yard. The tracks continued until they reached a play area for children and then suddenly stopped. And, then, they were gone. Really gone. As if the Bigfoot had de-materialized. Stan has more than a few cases on record of the Bigfoot beasts suddenly disappearing in almost impossible fashions. While so many people in the Bigfoot field ignore this aspect of high weirdness, Stan most definitely does not. As you'll see in the pages of Stan's book. We're talking about portals and multi-dimensions. Now, onto how the UFO phenomenon ties into the Bigfoot angle.

Stan makes it abundantly clear that the areas he focuses on amount to what we would describe paranormal hot-spots. We get treated to how Stan, back in the 1960s, began to realize the sheer amount of ufological-based data in hand in Pennsylvania. And some of it is undeniably bizarre. For example, consider these words from Stan: "One incident involved multiple witnesses where a large UFO landed on a field and two Bigfoot in the same field at the same time." Such cases, I should stress, are not rare. Then there is the matter of dogs being terrified in the face of UFOs in Pennsylvania. Interestingly, there are many reports of dogs and Bigfoot creatures hardly being what you could call good friends. Quite the opposite, in fact. Now, onto a completely different subject: giant birds. Native Americans call them Thunderbirds. It's a fact that Thunderbirds often turn up where there are portals and doorways. Of one case in July 2017 in his home state Stan says: "Up on the Chestnut Ridge not far from Ligonier, people are again seeing huge birds at close range and on the ground. One witness said some of these huge flying creatures were 'big and black,' had wing spans that were estimated to be around twenty feet wide."

Elusive "black panthers" surface at mysterious hot-spots, too, as some of you may very well know. They are as elusive as the Bigfoot creatures. Stan devotes thirteen pages on the matter of these "Alien Big Cats." Pennsylvania is also a magnet for monsters of the deep. I'll give you a tidbit of a fascinating story investigated near to the Monongahela River, near Pittsburgh. Stan writes it was in the latter part of the 1980s when a pair of fishermen were shocked to the core by the sight of a bizarre creature swimming along. Stan says: "Whatever it was, the head was all black in color and was about the size of a soccer ball. The observers also noticed that it had two cats sized ears that came to a point. The eyes were black and piercing."

Fascinating, sinister and eye-opening: a cool and atmospheric new book from Stan Gordon.

NOTE: Many thanks to Stan Gordon for mailing me (Nick) a review copy of Creepy Criptids with the cover of the book.