Edgar Allan Poe and a Dark Grim Prediction at Sea

The American writer, poet, editor, and literary critic Edgar Allen Poe is widely known as one of the oddest and most enigmatic figures in literary history, as well as one of the great authors and pioneers of American literature, being one of the first to use the short story format, a major force in the then nascent genre of science fiction, and considered to be the inventor of the detective fiction genre. Born in 1809 and suffering a rough childhood, orphaned by the age of three when his father left them and his mother died not long after, he would go on to write numerous literary works, including The Fall of the House of Usher, The Masque of the Red Death, The Pit and the Pendulum, The Purloined Letter, and The Tell-Tale Heart, among many others. His work is best known for stories of mystery and the macabre, full of dark twists and turns and frequent use of elements of the supernatural, and one of the eeriest is a tale he wrote that seems to have predicted a grim event, decades before it happened.

Despite his prolific output, it might seem surprising that Poe only ever wrote one actual full novel. His career was defined by short stories and poems, and he was never known as a novelist, but in 1838 this would change with the release of his novel The Narrative of Arthur Gordon Pym of Nantucket. Broken down into 25 chapters, the book is written in the style of a mock memoir written by the titular Arthur Pym, and follows his various adventures he embarks on with his friend, Augustus Barnard. The two head out to sea aboard a tiny boat on a drunken whim and are soon caught up in a raging storm that wrecks their boat and leaves them stranded in the middle of the ocean. They end up stowing away aboard a whaling vessel called the Grampus, owned by Augustus’ father, heading out on an adventure that includes shipwrecks, ghost ships full of dead bodies, hostile islanders trying to kill them, strange monsters, and various tales of swashbuckling derring-do. It also, in typical Poe fashion, gets rather bleak and grim at points, and this is where things get strange.

At one point in the novel, a murderous mutiny breaks out aboard the Grampus, during which Pym dresses as one of the dead men and chases off the mutineers by posing as a ghost, leaving only him, Augustus, and two others behind; regretful mutineer Dirk Peters and 17-year-old cabin boy Richard Parker. The vessel is then hit by a massive storm that leaves them lost at sea in a lifeboat without supplies, food, or water. They proceed to drift about for days with only the remains of a sea turtle to eat between them and no fresh water at all. As the days go by, they begin to go hungry, starving to the point that they come to the decision that one of them has to die in order for the others to eat him for sustenance. They do this through the drawing of straws, and the loser is Richard Parker, who is then killed and eaten by the survivors after throwing his head, hands and feet overboard. It’s pretty gruesome stuff.

The Narrative of Arthur Gordon Pym of Nantucket released in 1838 to fairly poor reviews, and even Poe would call it “a very silly book” that he had only churned out for the money. It was criticized for its meandering plot, violence, and general lack of maritime accuracy at the time of release, but would later be reappraised and has gone on to be known as a classic, with some even calling it arguably Poe’s greatest work. Legendary writer Jules Verne would even write a sequel to it in 1897, called Antarctic Mystery. Yet it would become really well known decades later, when it would also turn out to be bizarrely prophetic.

In 1884, a yacht named the Mignonette departed from England, headed toward Sydney, Australia, along with four men named Thomas Dudley, Edward Brooks, Edwin Stephens, and Richard Parker. The vessel was not at all made for such a long journey in the first place, and then came the storm. The ill-fated Mignonette was destroyed, leaving the four men stranded at sea aboard a tiny life boat with no food, water, or supplies, although they were able to catch and eat a sea turtle. Sound familiar yet? For eighteen days they drifted aimlessly under the hot sun, until one of them, mad from thirst, took a long swig of seawater and fell ill. Interestingly, this happened at right about the same time they had been considering drawing straws to decide who must die so that the others could live. Since the one who had drunk the seawater was already seemingly doomed, they killed him and ate him and drank his blood to survive. Oh yeah, and the one who died was 17-year-old Richard Parker, just as in Poe’s story.

It is an almost uncanny example of a piece of fiction seeming to spring to life for real, and although the Mignonette case and subsequent trial was very famous in England, the eerie synchronicity it wasn’t even noticed until almost a century later, when in 1974, a relative of the Richard Parker noticed the similarities and wrote a letter about it that was published in The Sunday Times. The coincidence is notable in just how similar the two events are, right down to the sea turtle and the name and age of the victim. Was this just pure, dumb coincidence or something else? 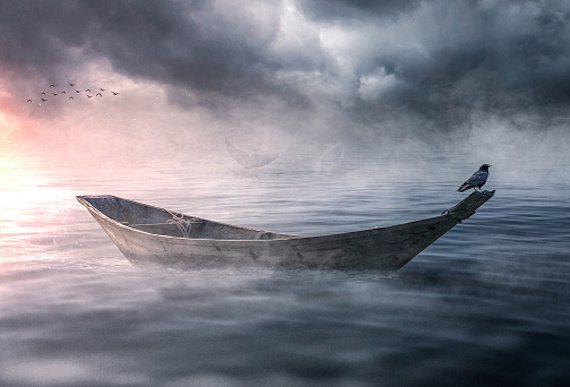 Interestingly, there are some other supposed instances of Poe predicting things well in advance. One is his 1840 story The Businessman, in which a man survives a traumatic brain injury that changes his personality for the worse, causing him to devolve into a violent, obsessive maniac. Eight years later, railway employee Phineas Gage was pierced through the skull and brain by a large iron spike, which went on to dramatically alter his personality, of which I've written about before. These behavioral changes were closely studied, and gave doctors their very first look at the workings of the frontal lobe and how it relates to social cognition and personality. Somehow, Poe had described this perfectly in his own work, demonstrating an uncanny understanding of something that no one had even known existed at the time, to the point that that neurologist Eric Altshuler would write, "There's a dozen symptoms and he knows every single one… There's everything in that story, we've hardly learned anything more. It's so exact that it's just weird, it's like he had a time machine.”

Poe also described the universe forming from the Big Bang years before that theory had been formulated in his 1848 dense, meandering prose poem Eureka, describing it all starting with “one instantaneous flash” from a single particle and how the universe expanded outward from that. He explained finer points on it as well, to the point that it anticipated many of the findings that would be made when the Big Bang Theory first started to gain traction in 1927. Before that, this view of the universe hadn't really been widely considered, yet Poe was spot on with many of his remarks. Add to this his very mysterious death and you have a man who was as odd and inexplicable as can be. Was this all just coincidence or something more? It is just one more weird thing to add to the life and death of a very weird man.

UFO Researchers, Beware of the Dark Side of the Phenomenon: It Can Destroy Lives