Hunting for Fairies, Odd Visions, the Tibetan Book of the Dead, and the Strange Life of an Eccentric Anthropologist

At times there is no knowing where our life is going to lead or where we will end up years from now. Call it fate, pre-destiny, or just coincidence or blind luck, but sometimes our paths can lead us down roads that we may not have possibly ever even imagined. Sometimes the path we thought we would follow wildly diverges from what we planned or expected, leading us into new and often strange uncharted territory, sending us hurtling towards a strange light at the end of the tunnel holding things we did not expect to see or perhaps don't even want to. In the early 1900s there was just such a man, who started life in a normal family in New Jersey and was on course to continue to live that comfortable life, but who was dragged off by fate and strange visions into a colorful and spectacular life that would take him to far-off lands, ancient secrets, fairies, and esoteric wisdom.

The American anthropologist and writer Walter Yeeling Evans-Wentz was born in Trenton, New Jersey in 1878 to German immigrant and realtor Christopher Wentz and Mary Evans Cook. Raised a Baptist, he would have a relatively mundane upbringing until his parents would become fascinated by the world of the occult and spiritualism, which was Walter’s first taste of the world of the esoteric and supernatural. His father was rather obsessed with Madame Blavatsky, the founder of the Theosophical Society, and her supposed mystical adventures in Tibet, and this had a deep influence on young Walter, putting the thought in his mind of one day traveling the world, seeing strange faraway lands and leading a mystical, ascetic life. He would daydream about this constantly, and even claim that he felt destined for this sort of life, when one day as a teenager he was lounging about beside the Delaware River and had what he would describe as a profound vision, saying:

I was hit by the conviction that this was not the first time that I had possessed a human body. There came flashing into my mind with such authority that l never thought of doubting it, a mind-picture of things past and to come…. I knew from that night my life was to be that of a world pilgrim, wandering from country to country, overseas, across continents and mountains, through deserts to the end of the earth, seeking, seeking for I knew not what.

Despite this powerful vision, it would at first remain just a mere fantasy, with Walter eventually becoming a realtor like his father and moving to California to live a normal life, where he would eventually enroll at Stanford University to study religion, philosophy, and history, and also join the Theosophical Society. At this point the life of wandering the world getting into adventures around the world was still just a dream floating around in the back of his mind, but this would change. After earning both a bachelor’s and master’s degrees from Stanford, Walter Evans-Wentz moved to Jesus College, Oxford, where he became friends with the Irish poet William Butler Yeats and studied Celtic mythology and folklore and became interested in the realm of fairies in the United Kingdom. He was so enamored of the folklore revolving around fairies, pixies, and other such entities that he got involved with ethnographic fieldwork collecting fairy folklore in Wales, Scotland, Ireland, Cornwall, Brittany, and the Isle of Man and sought to see these entities for himself.

During this time, he collected all manner of not just lore, but also numerous supposed real sightings and accounts of actual fairies, and Walter Evans-Wentz was convinced that they were real, beyond the domain of mere fantasy and legend. This fieldwork would become the basis of his thesis, and he would write a book on it all titled The Fairy-Faith in Celtic Countries in 1911. After this, be become a sort of pilgrim, wandering through such far-flung places as Egypt, India, Sikkim, China, Mexico, Europe, Egypt, Italy, Greece, and Japan, anywhere he thought “great souls of past times have lived and thought,” funding it all through real estate investments. During his travels through India in 1918 he would meet numerous spiritual figures and study with the Theosophical Society Adyar, and he became absolutely enamored with India, calling it a sacred place and once writing of such places:

All holy places, in varying degrees have been made holy by that same occult power of mind to enhance the psychic character of the atom of matter; they are the ripened fruit of spirituality, the proof of thought’s all-conquering and all-transforming supremacy.

In 1919 he would make his way to Tibet, where he would study Tibetan Buddhism and pore through various Tibetan religious texts, such as Karma Lingpa's Liberation through Hearing during the Intermediate State, which he became obsessed with and wished to translate for the Western world to see. He met an English teacher and translator by the name of Lama Kazi Dawa-Samdup, and over a period of several months went about meticulously having Liberation through Hearing during the Intermediate State translated into English. Rather curiously, Evans-Wentz did not think the title was catchy enough for Western audiences, and renamed it the more exotic and somewhat ominous sounding Tibetan Book of the Dead, partly because it sounded cool, and partly because he would claim it had reminded him of the Egyptian Book of the Dead that he had become acquainted with during his time in Egypt. Published by Oxford University Press in 1927, The Tibetan Book of the Dead would become the first ever English text to provide a window into the world of Tibetan Buddhism, becoming a smash hit in the process. Despite the fact that he had actually not translated a thing and indeed could not even really speak Tibetan, Evans-Wentz controversially credited himself only as the compiler and editor of the work, but this did nothing to stop the manuscripts popularity, and although it contained various inaccuracies it was considered a groundbreaking work. 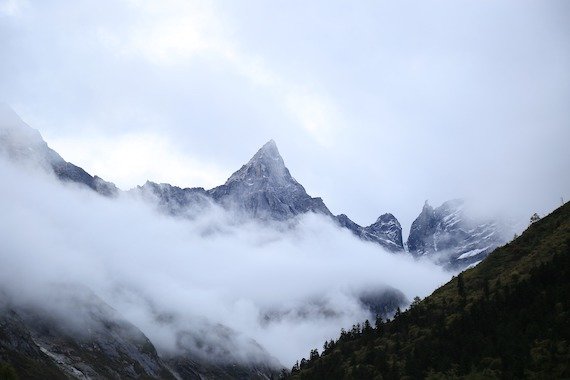 Evans-Wentz would have three other texts on Eastern mysticism and spirituality translated from the Tibetan, titled Tibet's Great Yogi Milarepa (1928), Tibetan Yoga and Secret Doctrines (1935), and The Tibetan Book of the Great Liberation (1954). Although his dream was to stay in India for the rest of his life, with the outbreak of World War II he headed back to the U.S. There he divided his time between his main residence at the Keystone Hotel in San Diego and a modest house near Mount Cuchama, on the Mexican border, which he felt was a sacred place to practice meditation, Buddhist spirituality, and what he called “the Dharma, the Buddhist way of truth.” He was mostly seen as quite the eccentric, wearing threadbare clothes and sometimes wandering around barefoot, in many ways living the same sort of ascetic life he had led in Tibet, what he called “the hermit ideal.” He would continue writing, and in 1946, he wrote the preface to Yogananda's famous work Autobiography of a Yogi, also continuing to prolifically write articles for Theosophical publications, as well as another book called Sacred Mountains, which looks at what he felt were the parallels between Native American beliefs and Tibetan Buddhism. Throughout this all he yearned to return to the life he had left behind in his beloved India, once writing in his journal:

I am haunted by a realization of the illusion of all human endeavors. As the Tibetan master Milarepa taught: buildings end in ruin, meetings in separation, accumulation in dispersion, and life in death. Whether it is better to go on here in California where I am lost in the midst of the busy multitude or return to the Himalayas is now a question difficult to answer correctly.

He would never get the chance to return, at least not in this life, dying on July 17, 1965, although he in a sense made one last trip there when his ashes were taken to a small temple in northern India. It is all a profound end to this wild ride of a life he led, going from simple New Jersey boy to world traveler, fairy hunter, and writer of one of the first accessible texts on Tibetan Buddhist that the West had ever seen. One wonders what would have become of him if he had ever managed to fulfill his unrealized dream of returning to that mystical land he loved so much, a place he only managed to make his final pilgrimage to in death. It is all certainly a stunning portrait of a man driven by his ideals and perhaps even forces beyond our comprehension, as well as a strange tale and peek into what drives us and aims us down paths we might not have ever thought we would take.

My Final Thoughts On That Skinny, Black-Suited Monster: The Slenderman