Following on from my recent article on the curious issue of UFO-themed government documentation going conveniently missing, I thought I would share with you what I consider to be the most sensational example of this on record. It's the FBI file on Hollywood legend, Marilyn Monroe. You may have seen my book on Marilyn and UFOs (Diary of Secrets: UFO Conspiracies & the Mysterious Death of Marilyn Monroe). Throughout much of the pages of the book I used the available FBI papers on Marilyn and on her untimely, suspicious death in August 1962. Murders made to look like suicides and accidents. Classified government documents fallen into the wrong hands. Stolen diaries; some of them burned and shredded for fear of what, one day, they might reveal. Powerful people with dangerous agendas. Famous faces. The Feds prowling around. Hollywood conspiracies. CIA agents keeping watch. Frightened people with secrets to hide. Wild sex. Drugs. Crazy parties and flowing booze. And, an incredible story of UFOs, aliens, Roswell, Area 51, Flying Saucers, and the death of a beautiful, but tragically scarred, icon. Her name was Marilyn Monroe. You think all of this is just the outline for a big-bucks movie? It’s not. It’s much, much more. 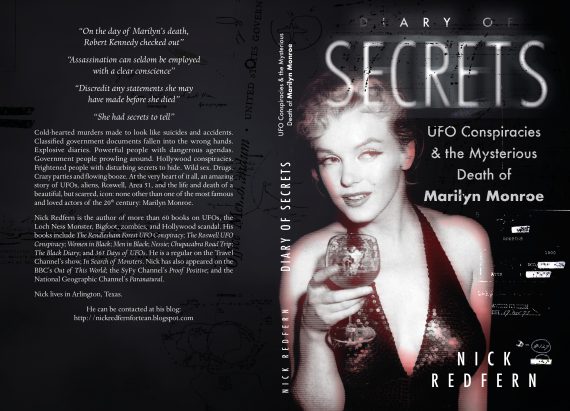 The FBI has done a very good job of making available its files on Marilyn to all of us. You can reach them here. There is, however, another angle to all of this; it's an angle that many people don't realize: while the Marilyn papers in the public domain most definitely make for fascinating reading, they only amount to 85 pages. And that's it. No more. Consider this: for someone who had affairs with the Kennedy brothers, who had a "secret diary" filled with government secrets, and who had an interest in communism, we would think that the file on Marilyn would be more than just 85-pages in length. But, the fact is that's all the FBI has on Marilyn. Nothing else. It's most definitely not the FBI's fault for the file(s) being so small, as you will see. Now, we get to the most important part of the story: a case can be made that - at one point in the 1970s - there were huge numbers of files on Marilyn, but they were suddenly either destroyed or hidden. Maybe, it was a bit of both. Here's why I suspect a scenario like that is the answer:

When FBI Director J. Edgar Hoover died on May 2, 1972, there was a wild scrambling to try and get a hold of Hoover’s own "secret files." They were very different to the everyday files held at FBI HQ. Around forty-eight-hours after Hoover's death, his ever-loyal secretary, Helen Gandy, and Mark Felt (better known as "Deep Throat" of All the President’s Men infamy/fame), took firm control of roughly 20,000 pages of documentation that Hoover had carefully kept out of the hands of one and all – except, that is, for Hoover's most trusted employees. More than 150 case-files completely vanished or were burned to a crisp. To give you an idea of the incredible amount of highly sensitive material that existed, it filled more than thirty large file-drawers. What's also most intriguing is the revelation that the CIA's James Jesus Angleton - chief of the CIA's Counterintelligence department from 1954 to 1975 – helped with the destruction and the vanishing. More than a few loose lips said that wasn't all that Angleton did: he fled with an untold number of some of Hoover’s most sensitive material.

We can only speculate on what, exactly, was contained in those destroyed and missing papers; but, there is a very good chance that some of it mentioned Marilyn. Possibly, a lot of it. It makes total sense. An official FBI file on Marilyn and another file - a "secret" one - held by just Hoover himself? Those events of May 1972 made such a scenario more than just possible. Perhaps, when Hoover died, such a file on Marilyn was swiped by Angleton. Still hidden. Still waiting to be found. And, perhaps, someone knows the full story of this one. If that is the case, then maybe -  one day - we'll all get to see the other files on Marilyn.