Mercury May Be Covered with Tons of Diamonds

John Lennon has been gone for over 40 years, but perhaps Paul McCartney could be persuaded to change one word in a beloved song from Sgt. Pepper's Lonely Hearts Club Band written mostly by John. Why would he do that? Because new research suggest that astronomers can now see Mercury in the sky with diamonds. Will this change the exoplanetary focus of Musk and Bezos?

“The pressure wave from asteroids or comets striking the surface at tens of kilometers per second could transform that graphite into diamonds.”

Picture yourself in a seat at a conference – specifically, the Lunar and Planetary Science Conference held in Houston recently. There, Kevin Cannon, a geologist at the Colorado School of Mines, made the case for our solar system’s smallest planet being covered with diamonds. His explanation is actually pretty simple to follow. Mercury’s composition is primarily graphite -- a crystalline form carbon. In its normal soft state, it’s perfect for pencil leads and lubricants. However, put it under high pressure and heat and it becomes diamonds. Many astronomers and geologists believe that four billion years ago, our inner solar system was in a state of cataclysmic asteroid activity called the Late Heavy Bombardment. While the asteroids pummeled Mercury, Venus, Earth and Mars, the telltale evidence was discovered in Moon rocks brought back by the Apollo missions. That’s when the Moon got a majority of its craters and it’s speculated that Mercury, with twice as many as the Moon, got twice the bombardment.

“You could have a significant amount of diamonds near the surface.”

Scientists believe the Mercury of 4 billion years ago was covered with magma and a layer of graphite upwards of 300 feet deep. As those asteroids hit Mercury, the pounding pressure turned the graphite into “shock diamonds.” What is a “significant amount”? According to Wired, Cannon estimates as much as 16 quadrillion tons! Before you book a seat and attempt to hijack a Blue Origin flight to Mercury, they’re tiny and buried all over Mercury.

Tiny diamonds found in some asteroids are thought to be shock diamonds formed by collisions. Earth and the Moon don’t have them because their surfaces aren’t covered with graphite like Mercury. Laura Lark, a researcher at Brown University in Rhode Island, also spoke at the conference and says dark spots of graphite on the surface of Mercury in images taken by cameras aboard NASA’s Messenger spacecraft between 2011 and 2015 support Cannon’s theory. Another mission could confirm it, but the next one isn’t until 2025 when BepiColombo, launched by the European Space Agency and the Japanese Space Agency reaches Mercury and drops a probe to map the surface. That mission could also verify a second theory – that a huge asteroid smashed into Mercury between 10 or 20 million years ago and smashed what was once a bigger planet into the tiny one it is today, blowing the rest of it into space and onto Earth and its close neighbors. 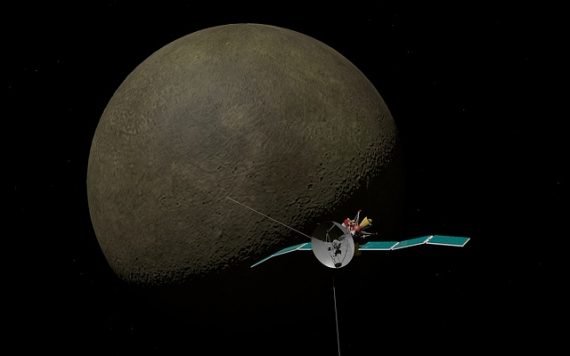 Will 16 quadrillion tons of diamonds entice space miners to head to Mercury with big shovels and buckets … and space suits designed to withstand temperatures ranging from 800 degrees Fahrenheit in the daytime and -290 F at night?

Picture yourself in a ship on a mission ... to Mercury in the sky with diamonds.