Singer Shaun Ryder Fears His UFOs are Something Else

There are a number of celebrities who claim to have seen UFOs or had encounters with extraterrestrials, but none rival the experiences of Shaun Ryder, a British singer/songwriter who claims he’s seen them for nearly fifty years … but now he thinks he knows why. And no, it has nothing to do with drugs.

“At first it was still, and then it went, 'Voooooooom!' And then again: 'Voooooooom!' Classic zig-zag, hovered, then went off at 10,000 miles an hour. Like Star Trek. Boom. Gone. Yeah!"

In 2013, Shaun Ryder, the former lead singer of Happy Mondays (“Pills 'n' Thrills and Bellyaches”) and Black Grape (“It's Great When You're Straight...Yeah”) told The Guardian he saw his first UFO at 15 in 1978 after dropping out of school and working as a messenger boy at the post office in Little Hulton near Manchester. A few months later, he claims to have seen "hundreds of lights going across the sky really slow." Those incidents sparked his lifelong interest in UFOs – in 2013, he was hosting “Shaun Ryder on UFOs” on The History Channel UK. In that interview, he admits to being less than 50 feet away with one UFO – an experience that convinced him UFOs are real and ETs are friendly. In 2019, he had a close encounter of a different kind. 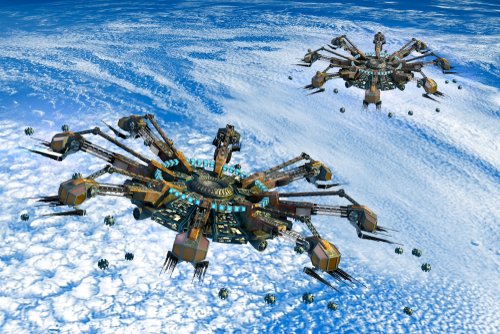 "I wake up one morning and there’s this thing that looks like a spider that’s moving across the windowsill and it’s got, like, red lights going across its back and it’s got six legs, sort of like a spider. It was hand size, five or six inches long, and makes absolutely no noise whatsoever. Then it goes to where the window is and then an aerial goes up and it goes up to where the window is open and then it changes shape and dives off and then as it’s moving out it completely disappeared.”

Ohh-kaaay. This is a good time to address what everyone familiar with Shaun Ryder is screaming – yes, he spent many years addicted to heroin, likely took a lot of other drugs and didn’t learn to read until he was in his 20s. He claims riding on a bicycle – not chasing UFOs – helped him conquer his demons. However, an article in the Daily Star reveals a recent bout of physical problems and subsequent introspection has him suddenly doubting his experiences.

“When you’re going blind, you start seeing things. I’m not going blind because I’ve had it checked out. But I’m the sort of a person who may be hallucinating and seeing mad things f***ing flying about – and I have.”

In 2021, he had his eyes checked because he was seeing floaters and wondered if they, not aliens, were responsible for his UFO sightings. His eyes checked out, so this week Ryder came to a different conclusion.

“Once you start f * g mithering, they just don’t leave you alone. I last saw a UFO just before Covid – just outside my house, again.”

“Mithering” means “to fuss over or moan about something, and Ryder now fears he being watched by ETs … or possibly the Men in Black? He’s convinced the government is hiding plenty from the public.

“There’s things flying about but they’re not saying they’ve come across an alien race.”

No, they’re not floaters or flashbacks or the result of something in his vape pen – he swears he only inhales nicotine these days. if that’s true, then what has Shaun Ryder been seeing?

The Strange Case of the Bizarre Tromp Family Road Trip