Tales of Evil Imp Spirits at a Park in England

Sprawled out over around 190 acres of Blackley, a suburb of Manchester, England, is a stretch of murky ancient woodland called Boggart Hole Clough. Designated as an urban park, the name is derived partly from the steep wooded valleys, ravines, and gullies, called “cloughs” in the local dialect, and it dates as far back as the Bronze Age. Although it is surrounded by developed housing areas, entering the park is like entering another realm. With its picturesque cloughs and dark paths through thick trees, there is a fairy tale like atmosphere here, a sense of seclusion despite the recreation and sports facilities found here, making it a sort of oasis of calm and beauty in the otherwise metropolitan setting. Walking through the ancient trees through the still quiet of the area, it is easy to forget that one is just a stone's throw away from a major urban center, and it is also not hard to believe that the place is infused with stories of spirits and hauntings. Indeed, Boggart Hole Clough has long often been mentioned among the most haunted places in the country, and one of the main sources of weird stuff here are all of the evil little beastly imps.

The main story that has long pervaded Boggart Hole Clough has to do with the other part of the name “Boggart,” a type of mischievous goblin-like spirit from English folklore. Usually described as ugly squat, hairy brutish little beasts, these impish creatures are said to inhabit a wide range of places including fields, marshes, woods, caves, muddy holes, in bushes, on dangerous sharp bends on roads, under bridges, and even in households. Depending on the region they may have different appearances or different powers, but they are always unpleasant. Among the many abilities attributed to the Boggart are turning milk sour, making objects disappear or teleport to other places, and making dogs or farm animals unable to walk. They are known to crawl into people’s beds at night, strip the bedsheets off of beds, pull people’s ears, and all manner of other miscellaneous mischief, sometimes merely harmless pranks and at other times quite dangerous. They are also said to relentlessly torment children, and will follow a family from place to place, with some particularly grim tales speaking of them actually eating children. They are also known to scare travelers passing through, and according to local lore, Boggart Hole Clough is home to at least one of these things.

The most well-known tale about the Boggarts of Boggart Hole Clough is that one once haunted a farmhouse of a local farmer named George Cheetham. It allegedly got up to all of the pranks and tricks a Boggart is known for, throwing objects, ripping sheets off of beds, misplacing objects, and banging on walls or laughing maniacally at all hours of the day and night. It honestly all sounds very much like typical poltergeist activity. The farmer and his family apparently got to the point that they were so frightened of the malicious spirit that they packed up their things and moved out, but the Boggart was having none of it. It followed them, taunting them with laughter and speaking from a milk-churn on their cart, and realizing they would never be rid of it they headed back to accept their fate. After this, the vile little creature grudgingly helped them out with chores on occasion, but mostly just proved to be a constant pest. This story may very well likely be purely local folklore, but there have been plenty of reports over the years of people encountering Boggarts at Boggart Hole Clough. Commonly reported phenomena include seeing the creatures through bushes, hearing their eerie laugh coming from the woods when no one else is around, and the unnerving, unshakeable sense of being watched. Some reports speak of having twigs, stones, or other objects tossed at them from the shadows.

Some old accounts are particularly frightening, such as one given by A man named Samuel Bamford, who in the 19th century came to this place to cast a love spell along with some friends, because creepy woods seem to be the place for that sort of thing, I guess? At some point they seem to have botched the spell, which then caught the attention of the Boggarts said to dwell there. When the spell went south, it would seem that they were accosted by something that seems very much like the Boggarts. An account of it reads:

A crash followed, as if the whole of the timber in the kloof was being splintered and torn up, strange and horrid forms appeared from the thickets, the men ran as if sped on the wind – they separated and lost each other. Plant ran towards the old house, and there, leaping the brook, he cast a glance behind him, and saw terrific shapes, some beastly, some part human, and some hellish, gnashing their teeth, and howling and uttering the most fearful and mournful tones, as if wishful to follow him, but unable to do so. 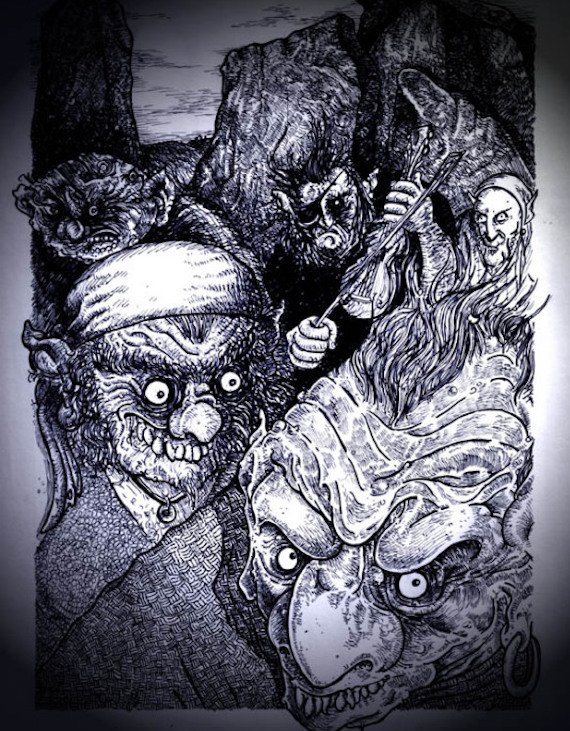 It seems possible that all of this phenomena blamed on Boggarts could actually be from several different phenomena, for instance there has been seen a ghostly Lady in White roaming the park as well, so it might not all be down to trollish evil spirits. There have definitely been other tales of various spirits and ghosts from Boggart Hole Clough, so maybe anything at all inexplicable here is blamed on the Boggart. Whatever the cause, it certainly seems to be a hotspot for paranormal activity, but why should this be? Paranormal investigator Jenny Randles, who has personally investigated Boggart Hole Clough, thinks it might have something to do with the composition of the rocks here and the land itself, and has given her thoughts on this:

It could be some kind of energy leaking from the Earth itself and creating these phenomena. But whether this is capable of doing other things as well I don't know. The area has a track-record over hundreds of years and I'm totally convinced it is a genuine hotspot and not just somewhere that has got a lot of media attention.

It is hard to know what to make of this all. Is there anything to this or is it just pure folklore and superstition? With its gnarled trees, dark winding paths, and long history, the place certainly holds plenty of mystique no matter what the case may be. Whether it is truly haunted by trollish beasts or not, walking through Boggart Hole Clough it is not hard to get the impression that there just might be something to it all, and that beady little eyes might be staring out at us through the shadows.

The World’s Most Famous Monsters, The Bigfoots: Not What They Appear To Be. It’s Much Stranger