The Bizarre History of the Sin-Eaters of Europe

Throughout history, certain societies have had various beliefs on the idea of our sins in life carrying on into death. There are many religions that deal with this concept, notably Christianity, in which one way to absolve oneself of these accumulated sins is to confess them and ask for forgiveness, but there have been myriad other ways that have been practiced to purge oneself of their sins. However, most of these various rituals and rites must be performed in life, before the sinner has died, so what of those who are already dead yet burdened with their sins? In the 17th, 18th , and 19th centuries, in certain areas of the United Kingdom, in particular Scotland, Wales, and Ireland, a profession came about that sought to address this issue, and so the sin-eaters were born.

Generally associated with connections to Christianity, although with probable roots in assorted pagan practices as well, the sin-eaters were individuals who would do just what it says on the tin; literally eat the sins of the dead. The exact ritual for doing so varied from region to region, but there were certain commonalities in that they all involved the notion that the sins of the dead could be somehow absorbed into food and consumed. To do this, a macabre practice was carried out in which food, usually bread, and sometimes a drink such as wine or beer, was waved over or placed directly upon the dead body, upon which the sin-eater would do some ritual or mutter some incantation and then eat and drink the offerings, the idea being that he also ingested and digested the sins of the deceased to free them not only of their sins, but also of the commonly believed perception that they would be doomed to wander the earth in death. One early account of such a ritual comes from the 17th century diarist John Aubrey, and reads:

An old Custome in Herefordshire has been at funerals to hire poor people, who were to take upon them all the sinnes of the party deceased. One of them I remember lived in a Cottage on Rosse-high way. (He was a long, lean, ugly, lamentable Raskel.) The manner was that when the Corps was brought out of the house, and layd on the Biere; a Loafe of bread was brought out, and delivered to the Sinne-eater over the Corps, and also a Mazar-bowl of maple (Gossips bowle) full of beer, which he was to drinke up, and sixpence in money, in consideration whereof he took upon him (ipso facto) all the Sinnes of the Defunct, and freed him (or her) from walking after they were dead.

It must be noted that not just anyone could eat sins. This was a specific job which only a certain few individuals were seen as capable of carrying out. The sin-eater was typically poor and lived away from the villages, and when a person died with unconfessed sins, they would be called in to action. Although sin-eaters were mostly used for those who had died unexpectedly, they were also occasionally used for those who had died of natural causes. For their trouble, the sin-eater would be paid a meager sum, usually a groat, which was a silver coin worth four pence, a few dollars in today's money. Another account of a sin-eater is given in by English antiquarian, writer, bibliographer John Bagford in his Letter on Leland's Collectanea, in which he writes:

The sineater was a person who for a trifling payment or remuneration, given in the form of food, took upon him the sins of a deceased person. It was usual for nearly every village to have its professional sin-eater. As soon as a death occurred this official was notified, and, repairing straightway to the house of the deceased. Notice was given to an old sire before the door of the house, when some of the family came out and furnished him with a cricket [low stool], on which he sat down facing the door; then they gave him a groat which he put in his pocket, a crust of bread which he ate, and a bowl of ale which he drank off at a draught. After this he got up from the cricket and pronounced the case and rest of the soul departed, for which he would pawn his own soul. An earlier and cruder form of the ceremony was to bring the sineater into the chamber of the deceased, where he received, sometimes with money, food across the body of the corpse. Having eaten the food in the presence of the dead, he was driven out of the house with execrations and abuse, sticks, cinders and every available missile being hurled at him.

The last part is interesting because indeed the sin-eaters themselves were typically seen as filthy and wretched, abhorred by the superstitious villagers as unclean and practitioners of black magic and witchcraft. It was widely believed that all of the sins they had absorbed had twisted their souls and degraded them, making them evil and in a way eternally damned and less than human. They were thought to consort with the Devil and evil spirits, and it was also believed that looking one directly in the eyes would bring about an evil curse. Because of this, they were avoided at all costs, social pariahs forced to live like lepers until their services were required, with even this being arranged discreetly. It was because of this that often after one of these rituals the sin-eater would be chased from the home in a hail of obscenities and thrown objects, running back off to their hovel on the outskirts of town with their coin in their pocket. 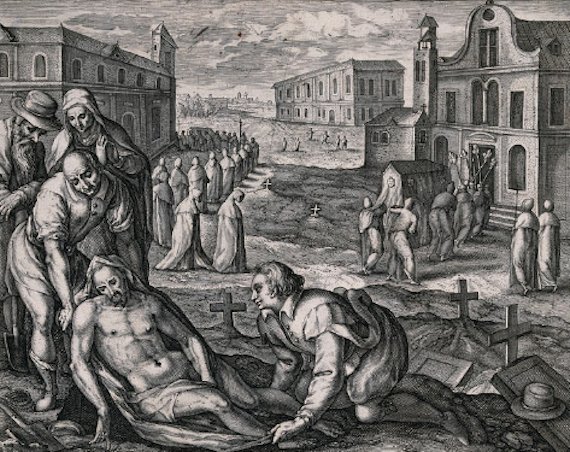 Not only were sin-eaters shunned by society, but they were also frowned upon by the Church, which did not condone such practices for several reasons. One was that becoming a scapegoat for others’ sins and willfully carrying the sins of the deceased was against the tenets of many sects of Christianity in the 18th and 19thcenturies. It also implied that human had power over spiritual events, bestowing them powers that only God had, which was considered heresy, and it also cut local priests, who were seen as the ones responsible for all funerary arrangements, out of the equation. For these reasons, the Church, while not actively persecuting sin-eaters or those who sought their services, certainly did not endorse or sanction the practice, and did what they could to discourage it.

While the practice of sin-eating seems to have been mostly confined to the 17th, 18th and 19th centuries, it was still going on into the early 20th century. The last sin-eater in Europe is said to have been a man named Richard Munslow, who died in 1906 in Shropshire, England. It is said that he had been a simple farmer driven to the dark profession after the tragic deaths of his four children made him decide to try to help them in the next world. Even then, the practice of sin-eating survived, making its way to the New World, where it became a tradition among communities in Appalachia up until as late as the 1950s, and rumors have persisted to this day that the ritual is carried out in some remote areas. It is all a curious peek into some of the stranger rituals of times past, and although the practice may not live on today, it is all certainly a macabre and dark historical oddity.

A Controversial 25th “Anniversary” That’s Not Too Far Away: The Dummies of Roswell