The year 1973 remains significant in the history of UFO studies for being a year where some of the most widely discussed and controversial incidents ever to have occurred were logged. From the alleged abductions of Charles Hickson and Calvin Parker at Pascagoula, Mississippi, to the famous “Coyne Incident” involving a near midair collision between a U.S. Air Force Huey helicopter and an oblong-shaped UFO, 1973 presented several incidents that remain among ufology's best-known cases.

Nineteen-seventy-three was also the year that the phenomenon known as cattle mutilation began to rise into public awareness. However, a tangent subject that once received significant attention for its apparent relationship to the mutilation reports involves sightings of “mystery helicopters," the origins of which remain undetermined.

“As mutilation reports exploded across the Midwest and West in 1975, the number of ‘mystery helicopter’ reports also increased in many areas,” read an entry by Scott H. Colborn in the Fortean Research Journal in 1989. “This helicopter/mutilation concurrence has continued throughout the past decade,” Colborn wrote. “We have concentrated much of our attention on the ‘mystery helicopters’ because we suspect that if we can acquire some concrete answers illuminating the role of these helicopters, we will be much closer to an understanding of the mutilation phenomena as a whole.”

According to Colborn, by the end of the 1980s, there were “well over 200 accounts of mystery helicopters near or at or in the vicinity of mutilation sites.” While he acknowledged that some of the reports had merely been “innocent flyovers” that were unrelated to the animal mutilations occurring nearby, there were nonetheless “too many reports of helicopters that harass herds of livestock, spotlighting cattle, chasing ground observers and even landing in pastures.”

More ominously, as Colborn noted, some of the incidents involved multiple helicopters numbering anywhere from five to seven of the aircraft all in the same vicinity. “People have been paced and chased down country roads. Deputies have pulled into pastures to watch unlit choppers rise and quickly fly away.” 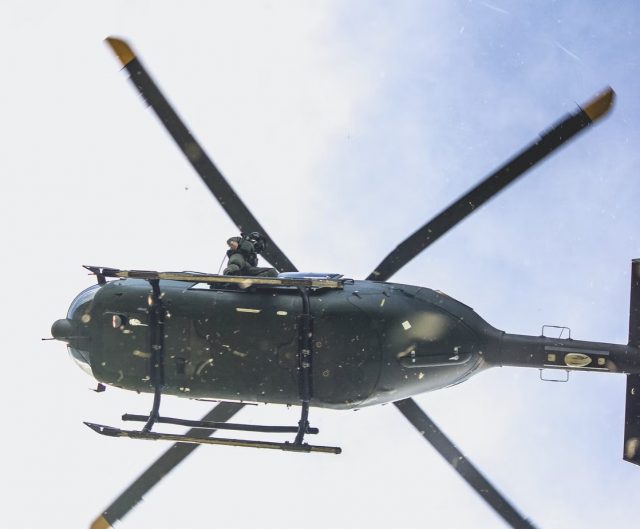 In 1975, the cases involving purported “mystery helicopters” began to escalate, particularly in states like Colorado. According to Colborn, farmers in the eastern part of the state that year were so wary of the helicopter sightings that they were “ready to shoot down anything resembling a chopper,” resulting in a temporary grounding of all known and accounted-for helicopter flights in the region.

Elsewhere in New Mexico, the issue was similarly tense, and even led to the FAA launching a probe into the mystery helicopters. However, once a National Guard helicopter was stationed at the Clayton, New Mexico airport with instructions to chase any unidentified helicopters that were reported in the area, the sightings seemingly stopped for a time.

“We do not know the results of the FAA investigations,” Colborn wrote, “as they have since denied having any knowledge or information about it.”

“Perhaps they found a reason not to announce their findings,” he added.

Strange helicopters of unknown origin hadn’t been exclusive to the areas where cattle mutilations were occurring. During several incidents involving aerial incursions that occurred at U.S. Air Force missile launch sites along the northern tier during the mid-1970s, military personnel occasionally described seeing what appeared to be craft with lighting arrangements that most closely resembled helicopters, rather than exotic-looking aircraft.

In 1975, missile sites that included Loring, Wurtsmith, and Minot Air Force Bases on the nights or early mornings of October 27, 29, and 31, and again on the nights of November 7, 8, 9, and 19 were host to sightings of what many servicemen described as helicopters. However, after probing by The National Enquirer, an official U.S. Air Force response stated that the “helicopter assumption was based on the sound and light perceptions of the eyewitnesses,” and that there had been no overflights at these bases that the Air Force managed to identify as helicopters.

Strange helicopters were also reported during the famous Cash-Landrum UFO incident that occurred in December, 1980 near Daton, Texas. Witnesses Betty Cash and Vicky Landrum described seeing a large number of helicopters that appeared to pursue (or possibly escort away) a large, hovering diamond-shaped aircraft which produced hot jets of flame from its base. In the days and weeks following the sighting, the witnesses developed an array of medical conditions that they believed to have been related to the object they observed. Despite persistent inquiries made with the U.S. Air Force, the source of the helicopter sightings that coincided with Cash and Landrum’s observation of a UFO was never determined.

As to the possible origins of these mystery aircraft, Colborn presented several theories, which included:

1) The objects resembling helicopters were actually UFOs which merely resembled more conventional military aircraft (or were perhaps intentionally disguised to look like them) but instead shared a common origin with other more exotic craft.

2) The mystery helicopters might originate from some private, non governmental organization or agency, which might include a corporate or even a cult group. Other possibilities Colborn proposed were secret societies, paramilitary groups, or an “international cabal of industrialists, energy czars or similar manipulators.”

3) The helicopters might be part of a U.S. government group, which for clandestine reasons may have been involved in operations that included surveillance of high security installations, and even cattle mutilations, possibly as part of a “massive chemical-biological warfare (CBW) experiment.”

4) Alternatively, the mystery helicopters might have origins from within the U.S. government, but rather than playing an active role in the cattle mutilations, their purpose might have been part of a secret investigation of these incidents.

5) Another possibility is that rather than merely investigating cattle mutilations, the helicopters were being operated by an investigative group or agency within the U.S. government which had a much firmer grasp on the problem than the public does.

As Colborn proposed of this fifth possibility, this hypothetical U.S. government group could know “much more than ‘civilians’ do,” adding that the mystery helicopters “are of military origin” and that the government of theUnited States “possesses a very substantial amount of knowledge about the mutilators, their means and motives.”

“The government may be attempting to persuade mutilation investigators and the populace as a whole that perhaps the military might be behind at least some mutilations, a diversion away from the real truth,” according to Colborn, who noted the apparent presence of “implied a prior knowledge” in some cattle mutilation cases, “which enable the helicopters to arrive around the time of a mutilation.”

Even after the passing of several decades, the “mystery helicopters” of the 1970s and 80s remain mysterious. It seems hard to imagine that their presence represents anything but the clandestine efforts of one or more U.S. government agencies, although their proximity to UFO incidents, as well as overflights of high-security installations, and even apparent relationship to the ongoing cattle mutilation mystery also represents one of the more ominous unresolved questions about the modern UFO mystery.

The Final Resting Places of Over 60 Ancient British Kings Discovered