The Odd Story of the Last Alchemist of England

Going back into ancient times, throughout such far-flung regions as China, India, the Muslim world, and Europe, there was long the belief that common, or base metals such as lead could be transmuted into “noble metals,” in particular silver and gold. Called alchemy, it was a cross-disciplinary practice that encompassed a wide range of an eclectic mix of protoscientific traditions, laboratory techniques, esoteric practices, and philosophies that sought to not only carry out these transmutations, but to also create a range of elixirs for curing diseases and even immortality. The pursuit of alchemy would go on to play a role in the development of early modern science, especially in the fields of chemistry and medicine, making it important despite the fact that it has long been debunked. Although it might seem to most to be firmly in the realm of robed wizards in the medieval era, alchemy was practiced right up into surprisingly recent times, and one of its last practitioners was a well-learned chemist in England who has gone on to become known as "the last alchemist."

Born in London in 1752 as James Higginbotham, the man later known as James Price does not have anything in his life that would have made him out to be any sort of quack or charlatan. He attended Oxford University, where he earned a Master of Arts at 25 years old and later became a doctor of medicine, after which he became a member of the Royal Society at the age of 29, which he would eventually preside over, and have what was considered a brilliant career. He was admired by his peers, wealthy, successful, and considered to be a genius at chemistry, making him extremely well-respected, so it might seem odd that much of his interest was focused on the ancient dying art of alchemy.

In the 18th century, alchemy had already long been thought of as the stuff of myth and fairy tales and with no real scientific merit, but Price disagreed. Behind the scenes of his more mainstream chemistry work, he was working on a process that he would claim could turn various elements and chemicals into gold. He would claim that he had perfected a “powder of production” that achieved the transmutation effect, with one white powder supposedly able to convert mercury into silver and a red powder which could convert mercury into gold. He had apparently successfully tested the technique at his own home laboratory, but when he told some of his colleagues of this process in 1782, there were plenty of raised eyebrows and whispered rumors that he was perhaps losing his mind or playing some kind of practical joke.

When Price learned of this skepticism and that he was being ridiculed behind his back, he decided to show everyone that he was the real deal by arranging to conduct a series of public demonstrations of his process in the laboratory at his house at Stoke, near Guildford, in order to put to rest naysayers. For these experiments, he invited a range of academics, lawyers, elite members of society, clergymen, people who perhaps arrived with a deep sense of skepticism, but they were about to be amazed. In front of all of these respected onlookers he mixed together borax, charcoal, nitre, mercury, and other assorted chemicals in a crucible, after which he put in the final touch; his mysterious red or white powders. When this was done, the end result was that he was able to use this concoction to turn mercury into 50 times its weight in silver or gold, depending on the color of powder he used, much to the utter astonishment of his audience. He performed seven of these public demonstrations over the course of March of 1782 with similarly impressive results, even presenting some of the gold he had produced to King George III

At first these seemingly successful tests of alchemy were an absolute sensation, generating much enthusiasm and seen as a groundbreaking new discovery that would change the world. At the time no one doubted it because Price was such an eminent and well-respected scientist, so there was a lot of excitement going around in academic circles and a renewed interest in alchemy. Price would release a bestselling book on it called An Account of some Experiments on Mercury, Silver and God, made at Guildford in May 1782 in the laboratory of J. Price, and the University of Oxford even presented Price with the degree of M.D on the strength of this work. However, The Royal Society took it all with a grain of salt, and thinking that their reputation was at stake with all of this talk of alchemy, they invited Price to set up a more controlled scientific test in front of other fellows. In particular Joseph Banks, the president of the Society and the chemist Joseph Black were not convinced at all that Price had actually managed it, very skeptical of all of this talk of actual alchemical transmutation of metals. It was to mark the end of his days. 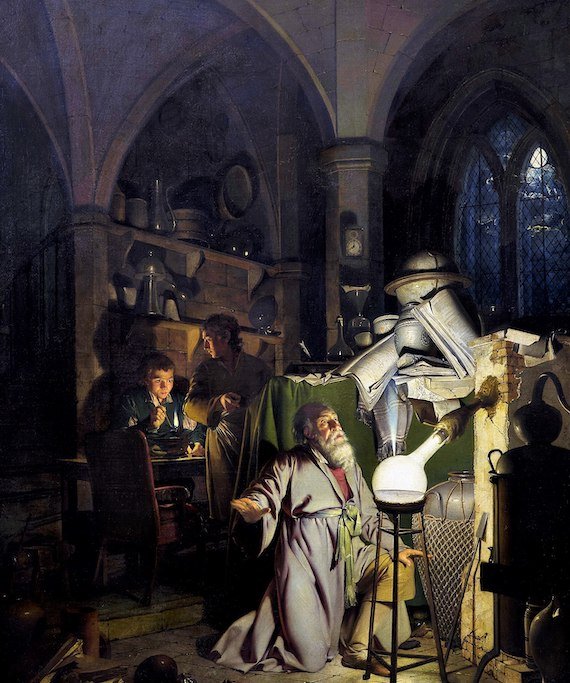 Price was evasive about this new round of tests, coming up with several excuses to buy time, such as that his powders had run out, that it would take a lot of time and money to prepare more, and even that the process was hazardous to his health. He also tried to explain that the process costed more than the actual value of the gold it produced, but the Royal Society insisted. He would eventually be forced to go through with it, and conducted this new experiment on August 3, 1783, after a 6-month absence during which time he claimed to have been working on his mysterious powders. The turnout was poor to say the least, probably because most people assumed he had skipped town, with only three fellows from the society turning up to observe the proceedings. At first, Price acted normally, setting up his equipment and preparing his chemicals, but at one point without a word he stepped off to the side, produced a flask, and drank from it. He was dead shortly after, the liquid in the flask proving to be prussic acid that he had made himself and stashed in his coat. It was later found that he had recently written his last will and testament and wrapped up his affairs before this fateful demonstration, showing that he had been planning this suicide for some time.

This death leaves a lot of questions with unclear answers. Did he kill himself because he knew he would fail? If so, why go through all of the effort to set up the demonstration first and then do it? Why not just do it at home and avoid further humiliation? Did he perhaps really believe that he could do it, only to realize at the last moment that he was wrong and doomed to fail? Were the powders real and he had simply been unable to produce more in time? One conspiracy theory even suggests that he faked his own death because he did not want his secret to get out, and that the three Royal Society fellows in attendance were his accomplices. Yet another idea was that he was killed to bury his work. We will probably never know for sure, just as we are unlikely to ever know why such a respected and upstanding scientist risked his reputation on his obsession with alchemy to begin with. Whatever the case may be, the practice of alchemy in England is largely thought to have died with him, and he remains a strange historical oddity.

Remote-Viewing and ESP: From the 1950s Onward