Humankind has always been caught in a sort of arms race, graduating from fist, to stick, to knife, to gun, to nuclear weapons, anything to get the upper hand on the enemy. During the dark days of World War II, Nazi Germany regularly pursued all manner of new weapons technology that exhibited some of the most advanced technology known at the time. Throughout the course of the war they created jet fighters and bombers capable of outclassing Allied aircraft, the first ballistic missiles (the V-2) and cruise missiles (the V-1), a radio-guided smart bomb called the Fritz X, the first rocket-propelled plane, called the Messerschmitt 163 Komet, and many others. In particular towards the end of the war, with the Allies looming closer to victory, the Germans really stepped up their plans for a whole array of futuristic weapons like something out of a science fiction novel, pursuing advanced weapons that would turn the tide for them and which they called the Wunderwaffe, or “Wonder Weapons.” It is here where we get a peek at some of the more and chilling of the Nazi secret weapons programs, and one of these was a proposed giant space laser mounted on an orbital space station.

Many of the plans for these super weapons were not uncovered until after Germany surrendered in 1945, when Allied forces going through Nazi facilities started turning up some rather sobering technical plans for weapons no one had ever even dreamed of before then. In particular, the raid of the German Army Artillery proving grounds, in the town of Hillersleben, Germany, turned up all manner of weird stuff. Nestled in the hills near the town, during the war the vast facility was home to over 150 engineers and physicists tirelessly working on all manner of experimental weapons tech, which reads like a list from some science fiction horror movie. Among the many plans were those for a stealth bomber, which would have been the first, battleship-sized armored behemoth tanks, saucer shaped aircraft that could take off and land vertically, an infrared sniper scope, a chain-like projectile made up of small, linked rockets with a range of 100 miles, various highly advanced new types of artillery rounds with ranges far beyond what was being used at the time, and many other audacious designs, mostly in the prototype stages but estimated to have been effective if they had ever gone to production. One of the weirder sets of plans found at the facility was a blueprint for a proposed orbital space station with a gigantic death ray.

The idea for what would come to be called the Sonnengewehr, or “Sun Gun” was originally the brainchild of German rocket scientist Hermann Oberth, who had come up with the basic idea all the way back in 1923. He had at first conceived of the device as a peaceful invention, an enormous “space mirror” that could provide light, illuminate ports, melt frozen rivers, generate electricity, and carry out various other useful and benevolent purposes anywhere on earth. He had envisioned it as a vast concave mirror perched upon a manned space station or satellite, which he called Raumstations, in orbit around the planet at an altitude of one thousand kilometers, able to be positioned anywhere needed. He not only thought up the layout of these space stations, but also the construction techniques and building materials required for creating such a thing, plans to use centrifugal force to create gravity, and even ways that the station could be resupplied with rockets. This was all pretty ambitious stuff during the era, all well ahead of its time, something purely in the realm of fantasy at a time when actual space travel was practically undreamt of. Yet although Oberth had good intentions for his proposed sun ray in space, when the Nazis came about they soon recognized it for its destructive potential and began expanding on these plans to essentially create their very own Death Star.

The plans involved first building a space station for their needs, and it was a rather ambitious project to say the least. Planned to be positioned 8,200 kilometers (5,100 miles) above the earth, the station would come with docking units for supply rockets and solar-powered generators, as well as hydroponic gardens containing thousands of pumpkin plants for oxygen production. The parts for the station were planned to be put together in orbit, with components brought up there with V2 rockets, and the crew would live onboard in specially constructed living quarters and wear magnetic boots to keep them grounded. Considering that this was an era in which humankind had still not sent anything at all into orbit, let alone a giant manned space station, it was all pretty forward-thinking stuff, but the Nazis claimed that they could have it fully operational within 15 to 25 years. Then there was the weapon itself.

The so-called "Sun Gun" was envisioned as a vast mirror made of metallic sodium and with an area of 9 square kilometers (3.5 sq. miles), which would be mounted on the space station and even have a door that could open in it for incoming supply rockets to pass through. This mirror would essentially work by focusing the sun’s rays into a single intense beam that would lash down to earth with enormous heat in a concentrated blast. Essentially it would work very much like a kid burning ants with a magnifying glass, only on a much grander scale and shot from space. This beam would theoretically be able to boil oceans, vaporize reservoirs, burn fields to the ground, and obliterate entire cities, and would be able to be positioned by its crew anywhere in the world, a constant specter of death lurking in the skies above. With an inexhaustible supply of ammunition courtesy of the sun and no way for the Allies to fight back against it, it was seen as ushering in a Nazi victory and subsequent world domination.

This would not be the first time that a way to weaponize the sun had been proposed and indeed just as potentially destructive and every bit as cloaked in mystery is an invention supposedly developed all the way back in the 3rd century BC by the ancient Greek engineer and mathematician Archimedes, of the city-state of Syracuse, then a part of ancient Greece. Among his many accomplishments during his life, such as the calculation of pi, Archimedes was also known to dabble in creating various machines of war for use against the Romans, such as catapults and even a massive metal claw that could be used to pick up and sink ships, and he once boasted, “Give me a lever long enough and a place to stand and I will move the world.” 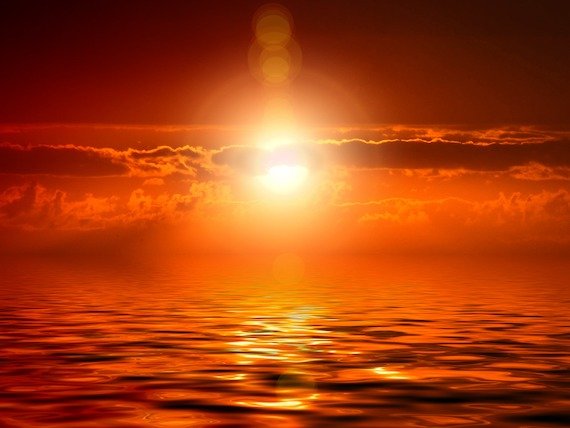 Among these colorful and elaborate weapons was something he came up with that has gone on to be rather aptly called “The Archimedes Death Ray.” It supposedly consisted of a series of enormous mirrors that were arranged in such a precise way as to catch and focus sunlight to such a ferocious intensity that it could spontaneously ignite and burn Roman ships off the coast up to 1,000 feet away. According to the ancient historian Galen, the death ray was used to great effect during the Roman siege of Syracuse, destroying many enemy ships with its blazing, unstoppable rays. However, over the centuries all other records of the weapon and any hint of how it was built have been lost.

In recent times there have been various efforts to try and recreate the “Archimedes Death Ray.” The most famous example was two episodes of the television show Mythbusters, but they couldn’t figure out how to make it work. Then a group at the Massachusetts Institute of Technology (MIT) managed to set alight a replica Roman ship measuring 10 feet long, but the whole process took a total of 10 minutes, and this plus other factors make this is all a questionable result at best. The model ship was motionless at the time, with no accounting for the motion of the waves that would be expected, and furthermore, the time from ignition to fire was 10 minutes, which seems a bit long to be of any practical value in a high stakes battle in the middle of chaos. There is also the fact that Archimedes’ Death Ray never caught on as a popular or widely used weapon, and was only mentioned a handful of times. As Archimedes biographer Sherman K. Stein writes, "Had the mirrors done their work, they would have become a standard weapon; yet there is no sign that they were added to the armaments of the time."

It would seem that the Nazis did not have much more luck bringing their own sun ray to life, as the end of the war happened before it could even come remotely close to actually being built. It is unlikely that even had the war not ended that it ever would have come any further than plans on paper and warmonger daydreams, as many of the calculations and concepts used are now known to be wildly inaccurate, and it simply would have cost far too much to ever be practical or feasible to get off the ground. Even if they had somehow managed to build this thing, it is thought today that it would not have worked as planned, making it a very costly failed experiment.

After the war, Oberth would move to the US to continue his rocketry research, and indeed he and other displaced and disillusioned German scientists would prove to be instrumental to getting America’s space program going in the 1950s. Oberth would also not be able to give up the idea of harnessing the sun’s power, and as late as 1961 he was proposing a mirror 300 miles in diameter that would use materials mined from the moon and could theoretically be used to “terraform” places on earth that were too cold to live in. Did the Nazis ever really pursue such an ominous plan? Considering most of the information available on the "Sun Ray" originates from a 1945 issue of Life Magazine in an article entitles The German Space Mirror it is hard to be sure. It could have all been war propaganda or a slow news day for all we know, but the Germans were definitely up to some pretty fantastic stuff during the war, so perhaps it is not so far-fetched, and it all certainly adds to the various stories of Nazi strangeness during World War II.

The Slenderman: A Creature That Might Have Been Around Longer Than We Knew