A Look at the Most Famous and Fake Bigfoot Tracks Ever

Of all of the proposed Bigfoot evidence out there, by far the most promising and alluring are the cases with physical evidence. After all, what better way is there to prove the existence of such beasts? The fired is hungry for such evidence, yet unfortunately there have been many bombastic fails along these lines over the years, and one of these must certainly revolve around perhaps the most famous set of Bigfoot tracks that has ever been.

There are few hoaxes that have served to undermine the findings of a potentially real cryptid and smash credibility, at least in the eyes of the media and the general public than that perpetrated in 1958 by a man by the name of Ray Wallace. A logger much of his life, Wallace was well-known by those around him as an irascible, unrepentant prankster and pathological liar, a lovable scoundrel who loved to play jokes on people, though reportedly never malicious ones. Although most of the time these were all in harmless fun, in the late 1950s his attention would turn to the world of cryptozoology, when he would enact a hoax that still incites debate and reverberates through the field to this day.

Although the stories of a large, bipedal ape-like creature called the Sasquatch had long been passed around in Native lore, and even reported by early European settlers, the actual name “Bigfoot” would originate with a set of curious large tracks that were found in 1958 at a Wallace Construction worksite in Humbolt County, CA, which was used for logging. The enormous, 16-inch long tracks, which weaved through the site and around bulldozers and other heavy equipment, immediately sparked the public imagination, as these were the days when tales of the mysterious Yeti, or Abominable Snowman of the Himalayas, were really taking off in the Western world. The tracks took the media by storm, starting in a piece for the Humboldt Times and spreading like wildfire to make headlines all over the place, and soon the alleged mystery creature that had made them was being popularly called “Bigfoot.” 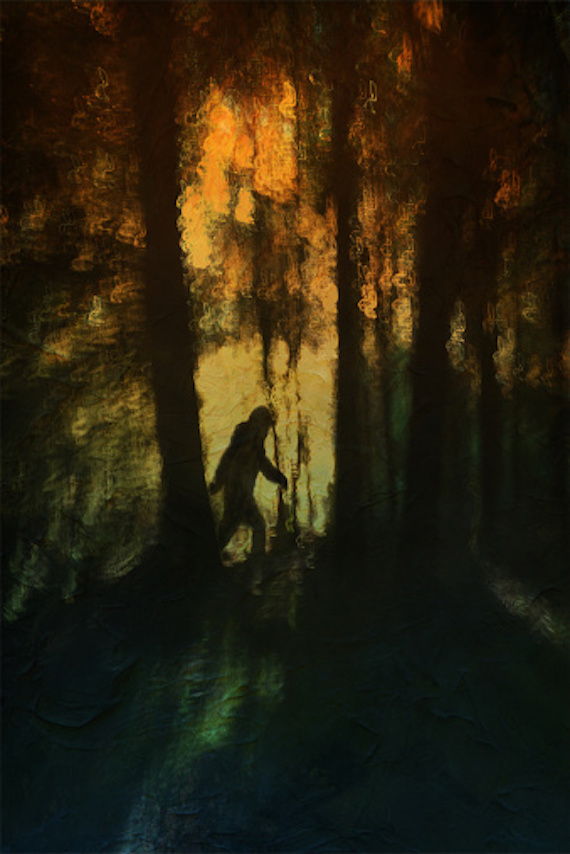 In light of this deluge of media attention and fanfare, Wallace himself apparently began milking it for all it was worth. Before long there were sightings of the creatures being reported in the vicinity of the logging site and even recordings of the creature’s alleged howls. The media couldn’t get enough of this stuff and this would continue for years, firmly entrenching the phenomenon of Bigfoot within the public consciousness. Throughout it all, Ray Wallace kept quiet about what was really happening, or at least his part in it, and it was not until his death on Nov. 26, 2002, that his family would start to shed some light on the web of trickery that had been going on.

Upon his death, Wallace’s son Michael claimed that his father had been in the possession of two large wooden, 16-inch-long fake Bigfoot feet and had admitted just before dying that he had hoaxed Bigfoot. The rest of the family would corroborate this tale and tell of how Ray Wallace had gone out with his brother and nephew to stamp the mystery footprints around his logging site and in several other locations throughout Northern California as a prank, using a truck to drive him over the ground in order to create a more impressive gait befitting of an enormous monster. Beyond just footprints, it was even claimed that Wallace would craft fake Bigfoot hairs out of hair taken from the bison he kept on his farm, as well as fake Bigfoot droppings. This revelation took the media and the world of cryptozoology by storm, and before long there were people going on to say that, considering the fake tracks had been placed around the vicinity of Bluff Creek, Wallace had even had a hand in crafting the Bluff Creek Patterson-Gimlin Bigfoot video, which is an iconic piece of footage often revered as real, which propelled Bigfoot into stardom, and is even now constantly discussed and debated as to its authenticity. In light of the news of hoaxing, there was soon talk that Wallace was the instigator behind the whole “legend” of Bigfoot, that he had more or less single-handedly created it with his faked footprints, and he became the media-proclaimed “Father of Bigfoot.” His son Michael would say of the whole fiasco, "Ray L. Wallace was Bigfoot. The reality is, Bigfoot just died."

Comments such as this fanned the media fire, where the story was covered extensively for months in prestigious publications nationwide, including the New York Times. The problem was that, although Ray Wallace most certainly did engage in fakery to some extent, the media liked to portray his hoax as being the origin of every single track, sighting, and piece of Bigfoot related evidence ever put forward. There are several problems with painting all Bigfoot sightings and evidence with the broad brush of the Wallace hoax, not the least of which is that unidentified Bigfoot tracks had already been found in the Pacific Northwest since at least the early 1940s, well before Wallace was out getting up to his tricks. There is also the fact that Wallace’s fake prints weren’t particularly well-made or convincing, with a decidedly rough shape and blocky toes inconsistent with the more natural shape and rounded toes of other prints that have been found. They looked fake. The faked prints also did not match other prints found in the area where the Patterson-Gimlin Bigfoot footage was taken, which were more convincing in appearance. Indeed, many alleged Bigfoot tracks were found at the time and since, to the point that it seems unlikely that all of them could have been planted by Wallace, especially not the ones after his death, although they could have possibly been from other hoaxers following his lead.

Additionally, all of the information on Wallace’s hoaxing came out after his death, from accounts given by his family, which was further embellished and sensationalized by the media, and which makes it hard to distinguish what the extent of Wallace’s hoaxing even truly was. Perhaps most importantly is that there have been hundreds of sightings from all over the United States and from all manner of eyewitnesses of large, hairy hominids, often from very credible witnesses. Is it fair or rational to say that these people are all lying and that all of this came from one prankster’s practical joke, the death bed admission of a known liar and hoaxer, and the testimony from his family after his death, all without full proof of the true extent of the trickery? Although it is possible that the Bigfoot phenomenon is the result of a series of ever escalating lies, hoaxes, and practical jokes overlapping each other and spiraling out of control, it seems rather irrational to throw out every sighting, footprint, or other piece of potential useful Bigfoot evidence based on the assumption that Wallace was “The father of Bigfoot,” and the sole origin of all of it.

Regardless of how much this fakery was involved in the Bigfoot phenomenon as a whole, the Ray Wallace hoax certainly did irreparable damage to the field of cryptozoology, contaminating much of the evidence related to Bigfoot and casting a shadow over the credibility of the field that looms over it even to this day. In light of this devastating hoax and the intense media sensationalism that perpetuated and exaggerated it, along with incomplete information and misinformation at the time, there is the tendency to throw the baby out with the bathwater so to speak. Although it would be detrimental to immediately throw out all Bigfoot related evidence based on this one proven hoax, the Ray Wallace hoax remains one which echoes throughout the field even now, and serves as a profound cautionary tale for cryptozoology in general, and Bigfoot studies in particular.

China Plans to Attack and Deflect Dangerous Asteroid by 2025