A Ouija Board and a Bizarre Murder

The one-time seemingly harmless "game" of Ouija board has grown to become one of the most well-recognized, spooky instruments of the paranormal there is. The subject of countless reports of the strange, as well as fictional TV shows and films, these relatively innocuous boards of cardboard and their plastic planchettes are by some accounts purportedly much more than they seem to be, for they are said to be a powerful window between worlds, portals even, through which forces from beyond speak to us, communicate with us, and even reach out to grab at us. While Ouija boards are certainly spooky and have their share of creepy lore, there are some cases that go beyond merely the odd to propel themselves firmly into the realm of the sinister. It seems that in some cases, whatever mysterious entities and forces allegedly lie beyond the veil between our world and the next are not merely content with speaking with us through these instruments, and are more interested in doing us harm, even inflicting death. Here we will look at one such sinister case, in which playing with a Ouija board turned into more than anyone could'vce bargained for.

One of the earlier and most well-known so-called “Ouija board murder” began its life in the fall of 1929, when two Seneca Indian women from the Cattaraugus Reservation in western New York state, near Buffalo, in the United States, sat down for a rather spooky session with a Ouija board. One was a 66-year-old traditional tribal healer and herbalist named Nancy Bowen, and the other was 36-year-old reservation schoolteacher Lila Jimerson, both of whom were very curious as to what lied behind the mysterious death of Bowen's husband, another tribal healer named Sassafras Charlie, who had died recently under strange circumstances. During the session they would later claim that the spirit of Bowen’s dead husband had actually made contact with them, and asserted that he had been murdered by a woman called Clothilde, and that the alleged spirit even went so far as to give a physical description of his killer and the address where she lived at a house on Riley Street in Buffalo. 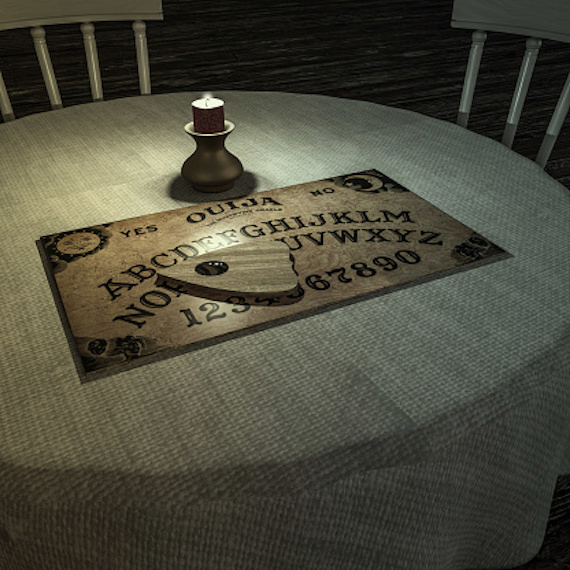 The name was familiar to Jimerson, who said that she was the wife of a gifted sculptor from Paris named Henri Marchand, who lived on the reservation studying the culture of the Natives. Marchand was well-known for his incredibly detailed dioramas, which were life-like three-dimensional miniature scenes from nature or history crafted from various materials and wax figures that were arranged and encased in glass. Indeed, Marchand, who had studied in Europe under the famous master sculptor Rodin, was very well respected for his lush dioramas that depicting Iroquois life, which had been very popular at the New York State Museum in Albany, and he had been commissioned make more to to be displayed at the grand opening at Buffalo's Science Museum in 1929. It was for the purpose of researching these dioramas that Marchand and his family, which consisted of his wife Clothilde, who was an accomplished painter herself, and his four children, had arrived at the reservation in the first place. Jimerson claimed to not only have known Marchand for nearly 10 years, but to have worked with him personally in the capacity of a model for his work.

In the days after this Ouija board seance, Bowen began to receive mysterious letters from a person calling herself "Mrs. Dooley," who elaborated more on the death of Sassafras Charlie and claimed to know secrets about what really had gone on. The series of letters spoke of witchcraft, hexes, black magic and murder, and suggested that Clothilde was in fact a witch, and that a dark curse had been leveled at both her husband and Nancy herself. One of the mysterious letters said:

I know something Secret. I decided that I’d better tell you and help you out. What I can. This is what I know Charlie Bowen is killed by a witch in this City of Buffalo. It was from a French woman…She killed Charlie because he have good medicine to sell in the city. Her witchcraft didn’t work so good so she decided to kill him...She kill many, many that way, Indians & white. But let me tell you more. She said she fixed another doll the same this doll is his wife Nancy.

By all accounts Bowen took these letters very seriously, and became convinced that not only was Clothilde responsible for the murder of her husband, but that the evil woman planned to come for her next. The idea that the Frenchwoman was a witch was further engraved into her mind by the fact that Clothilde was well known to collect mushrooms in the forest, which was a common practice in Europe but strange and alien to the Natives, with Bowen referring to them as “strange hellish vegetables.” Partly out of a revenge-fueled rage and partly out of fear of what would happen if nothing was done to stop the witch's evil, Bowen then went out and purchased a hammer and a batch of chloroform before setting off to where the “witch” lived with the express desire of extinguishing her life and putting an end to her sinister curse. When the oblivious Clothilde went to answer the doorbell on March 7, 1930, she was met with the sight of an elderly Native woman she did not know, who pointed to her violently and proclaimed her to be a witch. Bowen then brutally killed Clothilde with the hammer and shoved a chloroform soaked rag down the dead Frenchwoman’s throat just to be sure.

The body was found by Clothilde’s horrified 12-year-old son, Henri Marchand, Jr., when he returned home from school, and he immediately ran to the nearby Buffalo Museum of Science to inform his father of what had happened. When authorities arrived to investigate they were able to ascertain that two Native women had been hanging around the area before the attack, one older one and a younger one, perhaps casing the house and assessing the situation. They also soon learned of Henri Marchand’s connection with Lila Jimerson, and it came out that the two had been having an affair, which Marchand at first denied but was proven by a cache of lover letters that was discovered. When Jimerson was brought in as a suspect, she told police of Bowen’s involvement and Bowen was arrested as well, when it was found that she had the rather damning evidence of bloodied strips of clothing and earpieces of glasses that she had kept from the dead Clothilde. Additional questioning showed that on the day of the killing Jimerson had called Marchand and asked him to take her for a ride in his car, during which time it was assumed that Bowen had gone about her dark deed.

The story of the “Ouija Board Murder” became a media sensation, with the news referring to the two women as “untamed squaws,” and to Bowen as “the hex woman.” The media went through great efforts to really play up the back magic angle and talk of witches, as well as to emphasize the involvement of “Indians.” Indeed the news seemed to be laced with ethnic slurs and racism, almost an attack against the Iroquois people themselves as much as it was on the women involved. Authorities practically invaded the reservation looking for evidence, during which time they performed illegal, indiscriminate searches of people’s homes and showed very little respect for the Natives living there. 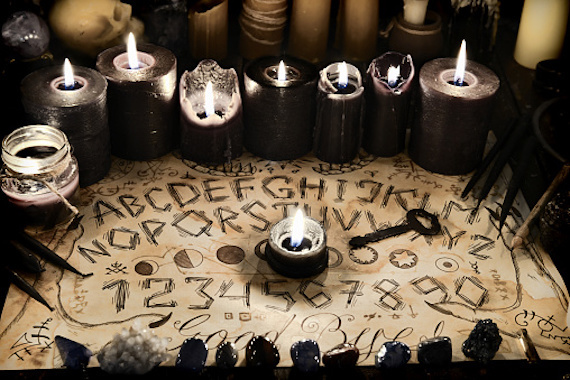 During the resulting trial Bowen claimed that she had been compelled by supernatural forces from the Ouija board to kill the Frenchwoman, and she said had at first tried to use hexes and black magic to bring her down. When the black magic failed, Bowen had taken it upon herself to finish the “white witch” off for good with the hammer and chloroform. The trial also saw Marchand come clean about his affair, and indeed he said he had had many lovers amongst the Native women, which he arrogantly described as being a “professional necessity” for his work as a diorama modeler. He also claimed that his wife had been fully aware of his dalliances, but had consented to them. Jimerson’s lawyer attempted to present her as a victim of jealousy and rage, painting her involvement as a crime of passion. As for Bowen, she was seen as being merely a pawn in Jimerson’s game and was claimed to have been too caught up in “Iroquois witchcraft,” even having used traditional weapons reserved for evil spirits in the attack, to have been fully aware of the gravity of her actions.

It all culminated in being deemed a mistrial when Jimerson, who was now being known in the media as “Red Lilac of the Cayugas,” suffered a respiratory condition related to tuberculosis and collapsed in the courtroom. Although she confessed to second degree murder while in the hospital, she later recanted this plea. The second trial commenced about a year later, in March of 1931. During this second trial, Jimerson’s defense claimed that she had not been responsible in any way for the murder and had not compelled Bowen to carry it out. It was claimed that Marchand had been imploring several Native women to kill his wife because he was “tired of her.” Meanwhile, Marchand had unbelievably moved off to Albany to remarry, this time with his 18-year-old niece. In the end, Jimerson was acquitted, Marchand was not charged or prosecuted with any crime, and Bowen was found guilty of manslaughter but given a sentence of time served.
It is unclear just what forces may or may not have been working through the Ouija board to influence the murder of Clothilde, but it is certainly a very weird case that shows that a simple board with some letters on it might hold some sort of influence beyond our current understanding.