The Bigfoot phenomenon has over the years become very strange, indeed. Where there was once simply the idea of an undiscovered hairy hominid of some sort, things have gotten complicated. Among the numerous strange reports of these entities, it turns out we have cases of Bigfoot seen with UFOs, telepathic Bigfoot, those that go into and come out of portals, and everything in between, all of it pointing to the idea that this may not all be the doing of a flesh and blood animal. To suggest that there might be something more paranormal to Bigfoot is a controversial area, to say the least, but such reports lurk about within the field, and some of these spring from a very odd paper illustrating cases of Bigfoot that seem to vanish at will.

Some very bizarre and inexplicable cases of Sasquatch simply vanishing in full view are listed in a paper called Vanishing Bigfoot and Anecdotal Accounts: Implications and Challenges for Researchers, by Sharon Cornet. It is almost completely devoted to cases that overturn the idea that Bigfoot is a flesh and blood creature, daring researchers to take a different angle, and one of the cases covered comes from the summer of 2000, by a witness named John Bohannon. He claims that had been driving along a dirt road during the daylight hours just west of the Three Rivers Campground, near Alamogordo, New Mexico, when he saw a massive bipedal, ape-like creature, which was estimated to have been around 8 feet tall and walking along in the same direction as his vehicle. The driver slowed down to gape at it, and the massive beast was described as having short, reddish brown hair all over its body, with longer hair underneath its forearms and a face that looked like a “Neanderthal.” It allegedly kept up its brisk stride while staring directly at John for about 100 feet, after which it suddenly just abruptly faded away into thin air, as if it had just been somehow erased. The witness explained that there were no trees or anything that it could have hidden behind and that it seemed as if it had walked through “an invisible wall.” 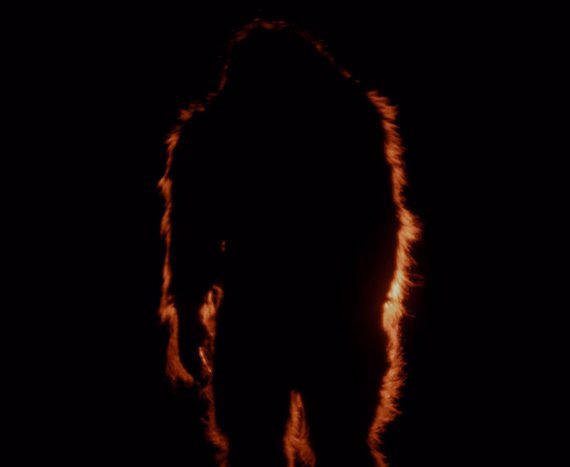 Also covered is a curious account that allegedly happened to witness Larry Kelm, in August of 1980 near Eugene, Oregon, and it is hard to really classify, seeming to point at vanishing Sasquatch being the result of some sort of inter-dimensional portal. On this day, Larry had decided to take a hike along the Mollala Indian trail, which connects the ridges of Saddle Blanket Mountain and nearby Oakridge. At some point during his hike, the witness claims that his surroundings became blurry, overcast, and tinged with an odd grey color, despite the sunny weather, and even though there were no clouds in the sky it seemed as if a shadow had been cast over the land. Larry would say of this:

The only way I can describe it was as if suddenly I was looking through someone else’s prescription sunglasses. I finished the step and started another. Every inch I moved forward the darkness increased and the gray blurring turned into a jumble of shapes that made no sense.

Then, as suddenly as this had all happened, Larry reports that he seemed to pass “a barrier,” and that everything returned to focus but that it was now night time and the wind had completely ceased. Upon looking about himself, Larry found that the scenery had changed in other bizarre ways as well. Instead of the fir trees that had been around him before, there was now thick, unrecognizable and wild vegetation similar to a jungle, and the air seemed thick and oppressively humid. Even though it was now night and there was no discernible moon in the sky, he found that he could still see everything to some degree, as if there was some mysterious light source casting a faint frosting of light upon the landscape. At this point, Larry claims that the air was pierced by a “continuous high pitched keening sound,” which immediately filled him with an unbearable sense of dread. The witness explained the bizarre events that followed:

It was at this point, I heard a whispered "Gotcha" over my right shoulder. I couldn’t tell if I heard it with my ears or inside my head. The word wasn’t directed at me but something said the word quietly to itself. I was so terrified I actually felt my heart stop for a moment. That whispered word is what saved me. I opened my mouth and gasped in a huge gush of thick air and recoiled backward in the same footsteps I had entered wherever I was. As I threw myself backward, I looked over my right shoulder. A dark colored hairy right hand and arm was reaching for my throat over my shoulder. The hand had pale ivory spade-shaped fingernails. The nails looked clean and almost had a manicured look to them. The thumb was placed lower (towards the wrist) on the hand than a human’s is. Both hand and arm were thin and powerful looking and both were covered with thick coarse black hair. I got a good look at it because the thumbnail grazed my neck (it did not break the skin) as I moved backwards. As I continued backwards, the hand clutched where my neck had been a split second before and it seemed to fade off into the distance as I returned through the Portal. 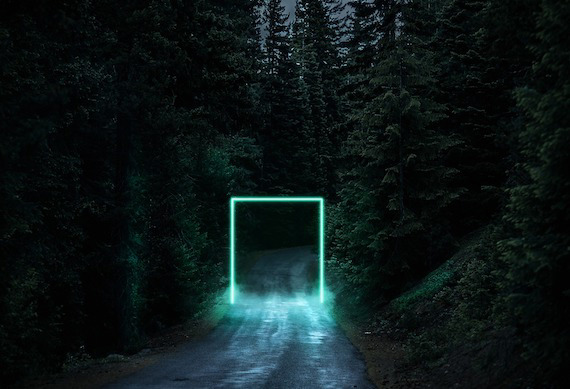 As soon as he had scampered a few more steps backwards, Larry found himself back in the cool mountain air he had left behind and back in his familiar surroundings, and the portal before him seemed to be an oval shaped patch of shimmering air that slowly faded away until it was gone. Larry then ran off towards his truck as fast as he could without looking back. The terrified witness later would reflect on what had happened to him, and came to the conclusion that it had been some sort of inter-dimensional trap, saying:

On my way home I was absolutely horrified at the thought of what would happen if I were to drive my truck into something like that. It had been a trap pure and simple. Whatever it was that tried to kill me somehow kept the Portal hidden from me on the way in, and I didn’t actually see it until I was back out again. I had terrible nightmares for years, and still haven’t come to grips with what happened. My fingers are trembling and the hair is standing up on the nape of my neck as I write this.

In yet another report, a witness called Ms. Montanez was driving along a desert highway east of El Paso, Texas, when she spotted a Bigfoot reportedly hunched over a dead coyote. She slowed her vehicle to get a better look at the bizarre sight, and claims that as she looked on the massive beast started to sort of sink, as if being absorbed into the ground, until it was completely gone. The witness was convinced that there had to have been a cave there, and that the thing had simply retreated to its dark confines, but when the spot was investigated there was found to be no cave or other opening in the ground. Curiously, the coyote was gone and there were no footprints of anything that could have matched the description of what she had seen. Where in the world did it go? No one knows.

How do we deal with such cases and how do they fit into the Bigfoot phenomenon at large? Is there perhaps something more to it all than a flesh and blood animal, or are there more than one phenomena at work here, intertiwining to create a morass of weirdness? There has been the tendency to push cases of paranormal Bigfoot to the periphery, but is there perhaps something we can learn from such cases? Whatever the case may be, it all challenges the idea that this is strictly an undiscovered animal, and adds more bizarreness to a field that is already strange enough as it is.

A Fantastic Wave of UFO Activity and the FBI