From Mothman to the Sinister Story of “Mr. Cold”

For most people, when the matter of Point Pleasant, West Virginia surfaces, the Mothman is at the heart of things; that red-eyed, winged thing that had the good folk of the area in states of terror for the best part of a year. There is, however, another aspect to all of this. It’s the strange and eerie saga of a character named Indrid Cold, a man with a creepy smile. A lot of people have heard the name, but not everyone is aware of the full story. One who did know the story to its full degree was the late Susan Sheppard. She was a good friend to me and someone who passed away far too early. With that said, I would like to share with you what Susan told me about Mr. Cold. It’s a bizarre story that ties in with John Keel's book, The Mothman Prophecies. As Susan told me: “There had been a puzzling event that occurred in nearby Parkersburg twelve days before. This happened on November 2, 1966 one mile south of the city limits of Parkersburg. It involved a sewing machine salesman whose life was about to be disrupted in such a way that he would never entirely recover. His name was Woodrow Derenberger, but everyone called him ‘Woody.’ It was shortly after 6 p.m. in the evening, when Woody Derenberger was driving home from his job as a sewing machine salesman at J.C. Penny’s in Marietta, Ohio to his farmhouse in Mineral Wells, West Virginia. The ride home was overcast and dreary. It was misting a light rain.

“As Derenberger came up on the Intersection of I-77 and Route 47, he thought that a tractor trailer truck was tailgating him without its lights on, which was unnerving, so he swerved to the side of the road and much to his surprise, the truck appeared to take flight and seemed to roll across his panel truck. To his astonishment, what Derenberger thought was a truck was a charcoal colored UFO without any lights on. It touched down and then hovered about 10 inches above the berm of the road. Much to Derenberger’s surprise a hatch opened and a man stepped out looking like “any ordinary man you would see on the street - there was nothing unusual about his appearance.” Except the man was dressed in dark clothing and had a “beaming smile.” As the man proceeded to walk toward Derenberger’s panel truck the “craft” jetted up to about 40 feet in the air where it floated above the highway.” 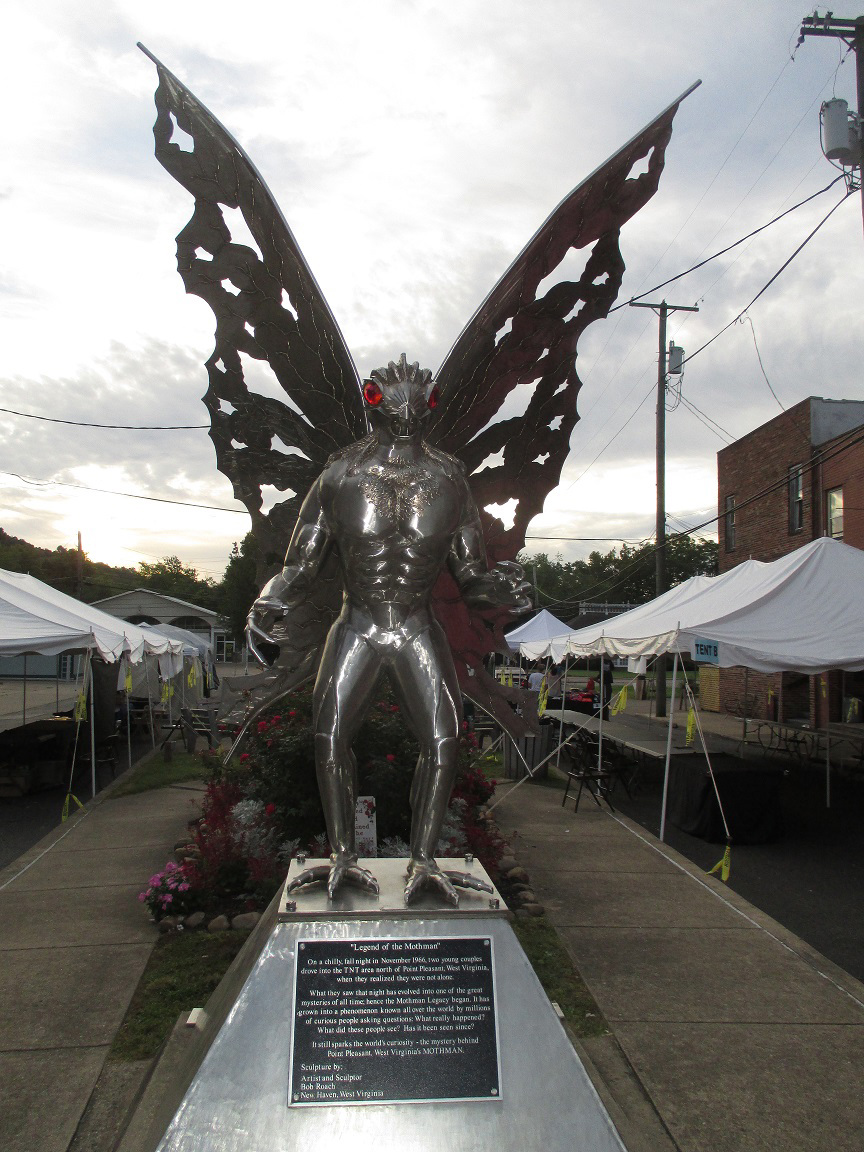 Susan then said: “What happened next was unsettling, because as the darkly-dressed man came up toward the vehicle Woody Derenberger heard the words, ‘Do not be afraid, I mean you no harm, I only want to ask you a few questions.’ Derenberger did become afraid because as the man spoke to Woodrow his lips did not move. The man then moved to the opposite of the truck and told Derenberger to roll down his window so they could talk better, which he did. Next what formed in Derenberger’s mind were the words, ‘Now you can speak, or you can think… it makes no difference, I can understand you either way,’ … this is what the dark man said.” Later, when Derenberger was questioned on local live television he was scrutinized over what seemed a contradiction because if the dark man communicated through a type of mental telepathy why would Derenberger need to roll down his window to talk? Wouldn’t it be easier just to talk mentally?”

There was more to come, as Susan revealed: “Woodrow Derenberger explained it was because Indrid Cold wanted to look directly at him as they spoke and he felt that, really, Cold wasn’t so interested in what was said but more interested in keeping up a communication with him. To Derenberger, that seemed the entire point of it all. Derenberger also noted that when Cold stared into his eyes, it was as if he knew everything about Woodrow Derenberger, and also, if he could only let go of his fear and do the same, he felt he would also know and understand all about Cold. In any event, Cold spoke through the passenger side window the entire time. “The physical description of Cold was commonplace. Derenberger described him as about 35 years of age, having a trim build, was about six feet tall, 185 pounds with dark eyes and dark hair slicked straight back. Cold wore a long dark coat and beneath the coat Woodrow Derenberger was able to glimpse the fabric of his ‘uniform’ that glistened beneath the coat. He also described Cold as having a ‘tanned complexion.’ Throughout the conversation Cold kept a frozen smile and curiously hid his hands beneath his armpits most of the time.”

Susan wasn’t finished: “Cold did, however, point at the city lights above the distant hills of Parkersburg and asked Mr. Derenberger, ‘What do you call that over there?’ Derenberger said, ‘Why, that’s Parkersburg and we call that a city.’ Cold responded, ‘Where I come from we call it a gathering.’ Cold later added the curious statement that ‘I come from a place less powerful than yours.’ As the men talked cars passed under the craft which drifted above the road. The occupants were seemingly unaware of the spaceship being there. After all, there were no lights that could be seen. Cold then asked about Parkersburg, ‘Do people live there or do they work there?’ Woody Derenberger answered, ‘Why, yes, people live and work there.’ Cold interjected ‘Do you work, Mr. Derenberger?’ (Woodrow told Cold his name as the conversation began). Derenberger answered, ‘I am a salesman. That’s what I do. Do you have a job?’ Cold answered, ‘Yes. I am a searcher.’”

Finally from Susan: “After that the conversation became mundane. Cold seemed to notice Woodrow Derenberger was scared and commented on it. Mr. Derenberger claimed Cold asked him, ‘Why are you so frightened? Do not be afraid. We mean you no harm. You will see that we eat and bleed the same as you do,’ and then added an emotive note, ‘We only wish you happiness’ which Cold said to the frightened man more than once. While Mr. Derenberger was being interviewed on live television on WTAP-TV, he attributed this puzzling statement to Indrid Cold, ‘At the proper time, the authorities will be notified about our meeting and this will be confirmed.’ The entire conversation took between five and ten minutes and then Indrid Cold looked inside Woody’s car with his ever-present smile, and said, “Mr. Derenberger, I thank you for talking to me. We will see you again.’”

The Space Brothers of the 1950s: Friends or Foes?