Majestic 12: How Did the Phenomenon of the "Secret UFO Files" Begin?

Back in 1987 a highly controversial batch of alleged Top Secret documents surfaced into the UFO research community. We're talking about whistleblowers and Edward Snowden-type figures revealing secret material on dead aliens and crashed UFOs. Collectively, the documents were referred to as the "Majestic 12 documents." Supposedly, Majestic 12 was a secret group buried deep in the heart of the U.S. intelligence community/government that had control over the bodies and wreckage found at Roswell, New Mexico in early July 1947. The team of Bill Moore, Stan Friedman and Jaime Shandera unleashed the files. The controversy began. For years ufologists debated on the documents: were they the real deal or not? Was it all government disinformation? Could the Russians have been behind the documents? Was it all just a bit of fun on the part of someone who wanted to screw around with the UFO scene? The questions were many. The answers, however, were not. The controversy still has yet to fully go away. There's something else, too: a lot of people don't know there was a second body of Majestic 12 documents. The papers - that were huge in number - surfaced in the early 1990s. And it's that second story I'm going to share with you today.

It was 1990 when a man named Timothy Cooper, of Big Bear Lake, California, began to quietly dig deep into the world of aliens. Cooper had every reason to do that. It all came down to Cooper’s father, Harry Bob Cooper. The latter was someone who spent a number of years in the U.S. Air Force; specifically from 1941 to 1945 and from 1947 to 1960. A few years ago I was able to get a full history of Cooper Sr.’s career from the U.S. National Archives. The papers show he was stationed at, among others, the Hawaiian Islands; the Marianas Islands; Alamogordo, New Mexico; and Holloman Air Force Base, New Mexico. Cooper was given the Good Conduct Medal; the WWII Victory Medal; the American Defense Service Medal; and more, too. He died on September 2, 2000. Cooper Sr. confided in his son something incredible: nothing less than disturbing knowledge of what the U.S. government knew about aliens from other worlds – and of what was being kept from the public. Interestingly, but also frustratingly, Harry Cooper’s material was only spread by the use of aliases. For example, in his 1991 book, UFO Crash/Retrievals: The Inner Sanctum, Leonard Stringfield described Harry Cooper as an “enlisted man” and called him “Bob.” And that’s all Stringfield would call Cooper. Meantime, ufologist Ryan Wood added some by saying that Harry Cooper was a “conduit” of many “document leaks.”

According to Cooper, Sr., the U.S. government was aware of a great deal on matters relative to extraterrestrial life. Quite out of the blue, UFOs had crashed to Earth in New Mexico in the late-1940s. One of those UFOs was the device found relatively near to Roswell, New Mexico, said Cooper, Sr. The bodies of the diminutive, somewhat-human-like creatures that were on-board were hastily taken to secure facilities where they could be autopsied and preserved for careful study. No-one had seen anything like this before. Nobody wanted to. “Nightmarish” was the all-encompassing word for it all. Planet Earth had visitors – and no-one knew why they were suddenly here. Things began to get even more worrying for the White House of the late-1940s. There was evidence the corpses of the retrieved, damaged aliens presented a biological threat to the Human Race. Fears of worldwide pandemics were quickly the order of the day. People were abducted against their wills. Minds were wiped cleaned by aliens. It would later become known in UFO jargon as “missing time.” Medical experiments, of an unclear nature, were performed on people in the dead of night. In rapid time, and behind the scenes, things were threatening to spiral totally out of control.

The government was not just worried, but utterly panicked by the sudden, and unearthly, presence in its midst. What was to be done? What could be done? Anything? Nothing? Somewhere in between? The main thing the collective intelligence community, military and government agreed on was to hide the whole situation from the public and the media. In fact, from everyone who was deemed a threat to national security. Sometimes, it was rumored, those “in the know” were shut down forever. See what I mean. For example, the jump (or, maybe, the ruthless push) of the first Secretary of Defense, James Forrestal from the 16th floor of the Bethesda Naval Hospital, Maryland on May 22, 1949, was rumored to have been directly caused by Forrestal’s breakdown. And what provoked that mental collapse? It all depends on who you ask. Ufologists will tell you Forrestal - a man with a mind filled with swirling secrets – was overwhelmed by the dark, alien secrets he suddenly found himself burdened with. The only thing we know for sure is that just a couple of months before Forrestal’s life was no more, he told his long-time friend, William O. Douglas, an Associate Justice of the Supreme Court: “Bill, something awful is about to happen to me.” Something awful did happen. Death came for Forrestal. The very first fatal victim of the UFO cover-up? Who knows?

It wasn’t long before Cooper began to receive more and more packages and letters in the mail - much of it revolved around Majestic 12. Such deliveries, to Cooper’s Big Bear Lake Post Office Box, continued up until around 1996. They contained nothing less than what appeared to be highly-classified documents on some of the same things that Cooper, Sr. had told his son about years earlier. Cooper, Jr., it seemed, had his very own “Deep Throat.” Or, as it transpired, a pair of them. They were Thomas Cantwheel and Salina Cantwheel: a father and daughter team that had a lot of the documents in their hands. Both were said to have worked in the world of intelligence and espionage for decades. By the 1990s, they were ready to get the secrets of the Saucers out for all of us to see. They tried to do so, by providing a wealth of amazing papers on UFO secrecy - including the hugely controversial "Marilyn Monroe-UFO document." The fact that “Cantwheel” is not a real name, and never has been, meant it became quickly obvious that the mysterious pair were using very curious pseudonyms (the closest real name is “Cantwell”). The mail-drops became more and more regular and the documents grew in number. Cooper decided to seek out the advice and help of a number of UFO researchers, including nuclear-physicist Stanton Friedman, who died in 2020, and Leonard Stringfield, who I mentioned earlier and who passed away in 1994. It was advice on what was going down that Cooper wanted - and also to share with Friedman and Stringfield some of the material that had fallen into his lap. 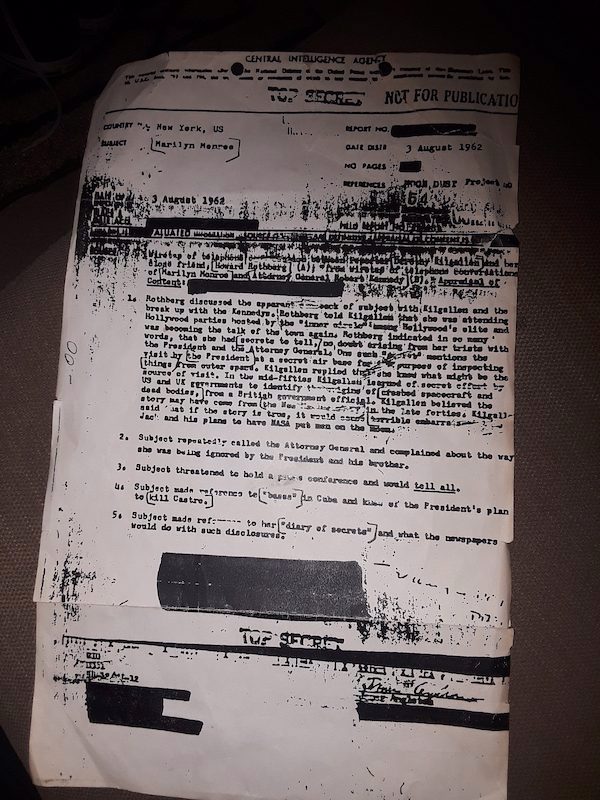 Both men were excited, but cautious, by what Cooper had described to them. One of the things Cooper put together for Friedman - and that very few have ever seen - was a 14-pages-long document on Cantwheel, his history, his work and a great deal more. I was able to get my hands on that entire document in the 1990s (Friedman was good enough to give me a photocopy of it). It describes the elderly Cantwheel as being “6 ft. 2 in. tall,” “in early 90s,” “speaks with a southern draw,” “rambles and changes subject quickly,” and “has good command of Russian and German language.” Cooper also informed Stringfield and Friedman that Cantwheel had spent time in Japan in the post-Second World War era, something that continued up until 1949. From there onward Cantwheel spent his life and career in the world of intelligence, counterintelligence, and manipulation, mostly in the United States. God knows how much of all this was true. Or wasn’t. That was one of the sticky issues that nagged me throughout this entire investigation: what was real and what wasn’t? Many in Ufology were sure (or hoped) the growing stash of the new Majestic 12 documents was the genuine article. That no-one had seen either of the Cantwheels’ didn’t help the investigation, though. Were they just the creations of someone’s fertile mind? Questions similar to those popped up now and again through the 1990s. It was understandable. Since, then, however, Ryan Wood has confirmed that although most of the documentation on crashed UFOs and dead aliens reached Cooper by mail (at Big Bear Lake again), Cantwheel “finally initiated brief face-to-face contact.”

The Cooper-Majestic 12 controversy went on for a few more years, but had started to collapse by the time the 2000s came around. Yet another bizarre, and mysterious, affair concerning dead aliens, crashed UFOs and supposed Top Secret papers. One day, I'll share with you another story of yet another Majestic 12 caper.