"And Saint Attila raised the hand grenade up on high, saying, 'O Lord, bless this thy hand grenade, that with it thou mayst blow thine enemies to tiny bits, in thy mercy.'”

-- "Monty Python and the Holy Grail"

In one of so many memorable scenes in the film, “Monty Python and the Holy Grail,” King Arthur ordered Brother Maynard to bring out the Holy Hand Grenade of Antioch so it could be used against the Rabbit of Caerbannog. While it seems absurd that a hand grenade would be a weapon in medieval times, new research on some ancient ceramic vessels from 11th-12th century Jerusalem found residue that indicates they may very well have been tossed at enemy soldiers during the Crusades with the intent of blowing them to tiny bits … or at least slowing them down. 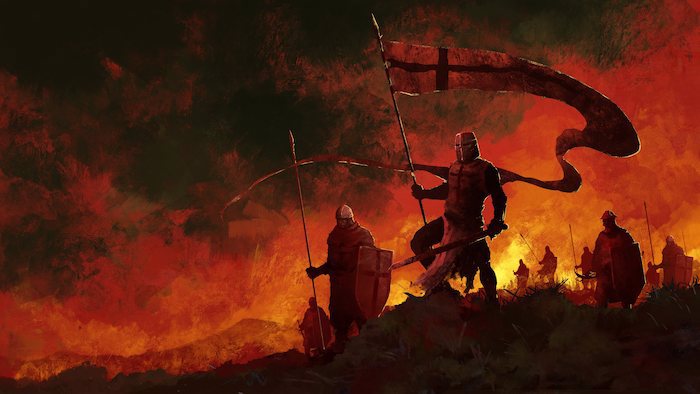 “The unique fourth sherd is from a stoneware sphero-conical vessel with very thick walls, no decoration and the residue supports the possibility it was used for the storage of chemicals or may have held the chemical ingredients for an explosive device, consistent with a medieval grenade.”

In a new study published in the journal PLOS ONE, lead author Dr. Carney Matheson of Griffith University explains that he, ceramicist Rob Mason and other team members were examining four pieces of pottery found in Jerusalem's Armenian Gardens dating back to the 11th and 12th centuries. These were originally unusually-shaped sphero-conical containers which were known to have served a variety of purposes, including drinking beer (of course) and holding oil, medicines and mercury. Matheson’s team found evidence on three of the sherds to support them coming from vessels used for those purposes. However, the fourth was a shocker – it contained residue of a mixture of chemicals that would have been flammable and potentially explosive. Since this region had not yet been exposed to gunpowder from China, the team surmised it was local in origin. But for what purpose?

“These vessels have been reported during the time of the Crusades as grenades thrown against Crusader strongholds producing loud noises and bright flashes of light.”

These grenades appeared to be used more for their shock and stun ability that destructive power. While there have been rumors of medieval grenades, this sherd is solid proof of use during the Crusades. In an interview with IFLScience, Matheson explained that while the explosive component was obviously not gunpowder, its recipe was difficult to reproduce.

“These were secret weapons and they didn't necessarily want to tell everyone exactly how to make them.”

However, they know that one component was fat – possibly from sheep or dolphins. Other components appear to be Dead Sea salts and urine. Since this was too early for a modern triggering device like a grenade pin and there was no evidence of a hole for a fuse, Matheson theorizes that the explosive was sealed inside of the ceramic vessel with a resin. It was then heated, building pressure inside the vessel. While the ceramic was extremely strong, the combination of the internal pressure and the landing on hard ground after being thrown caused enough of a fracture to release the flammable contents to create a flash and noise, probably start a fire and potentially cause other damage. However, that’s still a guess – more research is needed to perfect the alchemy, determine the origins of the elements and pinpoint when and where these medieval grenades were used.

New research into the grenades would verify one important element from the scene in “Monty Python and the Holy Grail” – the count.

“'First shalt thou take out the Holy Pin. Then shalt thou count to three, no more, no less. Three shall be the number thou shalt count, and the number of the counting shall be three. Four shalt thou not count, neither count thou two, excepting that thou then proceed to three. Five is right out. Once the number three, being the third number, be reached, then lobbest thou thy Holy Hand Grenade of Antioch towards thy foe, who, being naughty in My sight, shall snuff it.”

-- "Monty Pytohon and the Holy Grail"

It killed the Rabbit of Caerbannog. What did these grenades do to the enemies of the Crusaders?

Some Very Bizarre Alien Encounters and Abductions in Brazil