With the release of a recent book and several television productions, public attention to the remote area of Utah known as Skinwalker Ranch has grown. Competing sites such as Blind Frog Ranch (also in Utah) have cropped up as well, along with others. What they share in common is a series of reports of unexplained objects in the skies, bizarre creatures, haunting sounds, and noncorporeal figures.

Based on these tales, one might be tempted to assume that this sort of phenomenon is restricted to the American west. But these types of hotspots or "window areas" have been reported elsewhere. I recently interviewed some people associated with an area that appears to be strikingly similar on the other side of the world.

Quinyambie Station is a cattle range in Australia located in the northeastern corner of South Australia near the border with New South Wales. It's one of five connected ranges currently owned by the Mutooroo Pastoral Company and is home to more than 9,000 cattle. It is a desolate stretch of wilderness covering three million acres of land, with the nearest small village being more than 100 kilometers away. And in the 1980s, it was reportedly home to more than just livestock and kangaroos.

I interviewed one witness who we shall refer to as Robert, a pseudonym, as he is still uncomfortable discussing the subject in public. In 1984, Robert was an 18-year-old working on the cattle station as part of a team that hunted rabbits (an invasive species causing issues for the native wildlife) for a contractor that used them for pet food and pelts. In the 1800s, Sir Henry Kidman, the original owner of the ranching land had constructed a homestead in the northern reaches of the range near the dingo and rabbit fence that now separates the state from New South Wales. He and his family would later abandon it and move to a new homestead 80 kilometers to the south. Robert's crew used the abandoned homestead as a base of operations.

The men worked at night to avoid the blistering desert heat during the day. They set up camp in the kitchen at the rear of the homestead. It was the only usable room, as much of the rest of the building was filled with drifting sand and rooms that could not be accessed because the doors were not functional. They would take their four-wheel vehicles out at night to hunt rabbits, returning in the morning to rest.

Soon after starting work in this remote location, Robert began to see the inexplicable lights Australia is famous for, known as the Min Min lights. They were of various colors and usually far off in the distance across the sand dunes. That is, until one night when one of them wasn't. Robert and his mates saw a bright white light down near the ground between two dunes roughly a kilometer away. Robert described it as being white and intensely bright. At first, they thought it might be the bright headlights of a vehicle, though there shouldn't have been any other vehicles in that region at the time.

Being hunters, the men had rifles with scopes on them. They looked through their scopes and observed a patch of land between the two dunes, roughly fifty meters across that he described as being lit up "as bright as day," though it was a moonless night. They could not see any source of the light. It seemed as if it was simply springing from the ground. No unusual structures or lifeforms were seen in the brightly lit area.

The men returned to their vehicle and began driving toward the light to investigate. But before they had traveled more than 20 meters toward the unusual sight, the light vanished and the landscape returned to the same state of darkness as the rest of the area. They proceeded forward to the spot where the light had been but found nothing unusual. Robert described the team as being "freaked out," for a time, but they eventually moved on and resumed their hunting for the rest of the night.

Upon returning to the homestead in the morning, the men recounted their experience to the contractor they worked for. Rather than laughing at them, he nodded and told the young men that "strange s**t happens up here" and they should steer clear of any unusual things they might see because "you don't want it to attach itself to you." He would later go on to tell them in a very serious tone that there were surreal entities that inhabited the area, "some good ones here, and some not so good."

Following that incident, more strange events unfolded. The team encountered a series of inexplicable electrical and mechanical issues with their four-wheel-drive vehicle. Attempts at repairs were ineffective, but then the truck would suddenly begin operating normally again. At one point, after a significant electrical failure, one of the men said aloud, "c'mon mate, you have had your fun, we have work to do, can you please turn the lights back on?" The vehicle started back up normally and they had no further incidents with it.

Whatever anomaly the men were interacting with wasn't finished with them yet, however. On their next trip to the homestead, while out hunting rabbits, an enormous "sky blast" took place. A bright globe in the sky appeared and erupted into a massive bright light lasting for several seconds, lighting up the night sky from horizon to horizon. It left behind "an enormous glowing orange/red ring or halo" taking up a third of the sky. 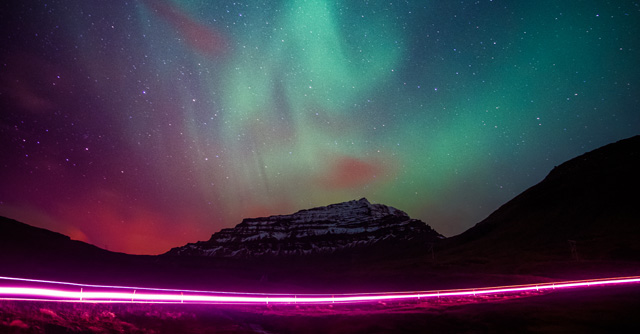 When the men's night vision returned, they looked around and saw what they described as a "pure white kangaroo" standing barely twenty feet in front of them. Albinoism is known in kangaroos, and the men had seen them on rare occasions, but they tended to have a dirty reddish color to them because of the sand in that area. They described this one as seeming to "glow" and be pure white. The men climbed back into their vehicle to turn on their spotlight to get a better look but when they did, the kangaroo was gone. They were in a vast, flat expanse of the desert with no place for the animal to hide, but it had seemingly just vanished. The men continued their work and then returned to the homestead before finishing that trip and returning home.

Robert subsequently returned for another work tour which would wind up being his last. One evening as the men were preparing to head out for the night's hunt, Robert felt ill, as if he had a cold coming on. His mates departed for the night's hunting and he remained behind to try to get some rest. Because of the nocturnal nature of the job, the men had never slept in the homestead at night, only resting there during the day. The night would be one that Robert would never forget.

Around 9 pm, Robert lay down in the kitchen area where the men made their camp to try to get some sleep. But as soon as he put out the lights he began to hear some voices outside and the banging of a door. Thinking his partners had returned early, he went to investigate but there was nobody outside. He returned to the kitchen, but then heard a door slam elsewhere inside the house. None of the other doors were functional, so this was an alarming development. Robert grabbed a flashlight to take a tour of the outside of the house looking for trespassers. He saw nothing unusual and returned to the kitchen.

By eleven that night, Robert could hear what sounded like the muffled conversations of men and women talking in other parts of the house. He heard boots walking on the floors of the abandoned building. He could hear the rattling of plates and glasses clinking as if there was a party taking place. From outside he heard the sounds of a horse and buggy in the yard. There was also accordion music. Robert spent part of the night in an abandoned outbuilding on the site, trying to get some rest.

The next morning, when everyone returned, Robert told his mates as well as the contractor about the overnight events. The contractor laughed and told him that's why he always slept in his Caravan near the truck where they stored the rabbits and not in the homestead.

Robert finished that tour and never returned. He moved further south and took up different lines of work. He rarely speaks of the experience, but since learning about other paranormal events in the news he feels there are similarities between many of these reports. You are probably seeing some of these parallels already. Strange displays in the sky are followed by nonphysical presences and unusual animals that appear and seemingly disappear without a trace. The comparison to Skinwalker Ranch is almost unavoidable, and Robert has noted the same comparison.

Other people we've spoken to tell similar stories. Australian paranormal researcher Kade Moir describes the Hills End area to the south of Quinyambie Station as “insanely active." Visitors to the region continue to report sightings of the Min Min lights and anomalous objects in the skies to this day. The cattle station may not be precisely the same as Skinwalker, but it doesn't seem to be far off.

When Government Agencies Take An Interest In UFO Books