The Strange Story of a Haunted World War II Battlefield

Stuck within the fringes of history are the many paranormal occurences that have supposedly gravitated towards the death and destruction of war time. With their pain, suffering, and anguish, such places seem to draw to them tales of the strange. World War II has the honor of claiming many such haunted places, and one of these is an expanse of beachfront property that was host to a massive bloody battle, and still seems to hold the ghosts of the past close.

One of the fiercest and most influential battles of World War II unfolded on August 19, 1942 in northern France. Called Operation Jubilee, or more commonly the Dieppe Raid, it was meant to be an Allied reconnaissance in force mission to test the feasibility of an amphibious assault on German occupied France. The intention was not to be making any permanent gain, but rather to see if they could take the small seaside port of Dieppe, hold it for a short time, and demolish any German important strategic buildings and coastal defenses there, before retreating to analyze any intelligence they could glean from the operation. The raid was to be carried out by over 6,050 Canadian and English infantry forces, supported by a regiment of tanks, 74 Squadrons of the Royal Air Force, and carried across the English Channel to Dieppe with 237 vessels and landing craft of the Royal Navy. Considering that they were moving in against an estimated force of just 1,500 soldiers of the German 302nd Infantry Division, it was thought that they would quickly storm the port and morale was high. However, things were not to go according to plan.

The attack on Dieppe began at 5 a.m., and immediately the Allied forces ran into problems. The tanks got trapped on the beach, aerial support turned out to be inadequate, there was a high seawall blocking their way, and the Germans had been forewarned of the attack and had put up obstacles and dug themselves in deeply in defensive positions. On top of this, the Germans put up much fiercer resistance than had been fully anticipated, and the attack was stalled almost from the get-go. Indeed, the infantry was unable to advance into the town, mostly held down by enemy fire and logistical issues on the beach, forcing them to retreat under heavy enemy fire and sending the Allied force, which had been superior in numbers, running back across the English Channel with their tails between their legs. The battle had been a bloodbath and orgy of destruction for the Allies, with one German officer saying of the massacre:

I have not witnessed images more terrible. In one landing craft the entire crew of about forty men had been wiped out by a direct hit. On the water we could see bits of wrecks, ships in ruins, corpses floating and soldiers wrestling with death. In Paris there was jubilation. The enemy’s operation was smashed in just over nine hours! 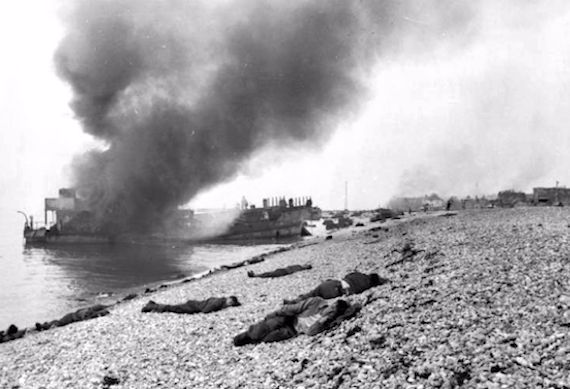 The attack had been a fiasco, and a costly one at that. Within the span of ten hours, 3,623 of the 6,086 Allied soldiers who had landed had been killed or wounded, the RAF had lost 153 airmen and 106 aircraft, and the Royal Navy lost 550 men, a destroyer, and 33 landing craft. The Germans had lost 591 men and had managed to hold the port, making it all a disastrous failure for the Allies. The only good things to come out of it for them was that British Commandos had managed to take out a battery of six German 150mm coastal guns and the defeat would also provide vital information that would be useful for the coming D-Day landings on June 6, 1944. It was indeed one of the Allied forces’ mostly devastating and costly defeats during the war. With so much concentrated death and suffering at one location, it is perhaps not hard to imagine that this place would be haunted, and by many accounts it certainly is.

The area has long been known for sporadic sightings of shadow figures and the apparitions of soldiers along the beach, but perhaps one of the most intriguing accounts of paranormal activity here comes from an account given by two Englishwomen on holiday at Puys, near Dieppe, in northern France, in the summer of 1951. That summer, Dorothy Norton and her sister-in-law Agnes Norton, as well as Dorothy’s two children and a nurse, were staying in the area at a house that had once been used by German soldiers during the Dieppe raid. One evening in the early morning hours of August 4, 1951, the house rumbled and there was a distant booming, as if there were thunderclaps out over the nearby sea. This was what they thought it was at first, just a fierce storm, but things were about to get very strange.

As the booming became more insistent and seemed to draw closer, they went to the windows, and after some time could hear what sounded like the staccato of gunfire and men yelling and screaming on the beach, as well as what sounded like explosions and even the sound of aircraft rumbling by. Alarmed, they went out on the balcony that overlooked the nearby sea but they could see nothing other than the placid water and empty beach. There was nothing at all to account for the extreme cacophony of what sounded like a warzone, yet it continued even as they looked out over the gently rolling waves. At times the sounds would abruptly stop, only to pick up again minutes later with even more intensity, and the women were surprised that there were not more people in the nearby houses coming out to investigate. In the meantime, they could now hear what sounded like rifle shots from the beach below, as well as what sounded like dive bombing airplanes roaring overhead although nothing was there.

There seemed to be a rhythmic flow to it all, with different sounds, such as artillery and airplanes, staggered with gunfire in waves, and they managed to take notes of when certain sounds would start and stop, keeping a record of the shifting of the battle sounds. For instance, at 3:47 there had been some gunfire and booms out at sea, 5:12 a.m. they heard the loud boom of shells seeming to hit all around them, at 5:15 they heard the whine of several aircraft, at 5:20 there was more intense shelling, joined by the heavy sound of many phantom aircraft, shouting on the beach, and the sound of landing craft beaching and unloading troops. At 5:45 there was the sound of dive-bombing, and so on. They were even able to sometimes hear what the men were shouting, and jotted this down as well, even German words they did not understand, writing it all out phonetically. After some time, the gunfire began to wane and the sounds of the aircraft grew more distant until just before 7 a.m. the noise ceased altogether. It was all very strange, as even though they had not seen anything, it sounded like a huge battle had taken place on that beach and out at sea, and when they asked others nearby if they had heard anything, no one knew what they were talking about. Dorothy would also recall that she had heard similar noises, but much fainter, the previous week but had thought nothing of it until then.

At the time they knew nothing about the area’s history, but they became convinced that they had heard the ghostly sounds of some epic battle and contacted the Society for Psychical Research. It was then that they learned of the Dieppe raid battle that had taken place in 1942 practically right at their doorstep, and not only that, but when researchers looked into the case, they found that the notes the women had taken of the flow and timing of the noises matching the pace of the battle to the minute. In addition, the notes they had taken of what they heard the phantom voices say turned out to be military talk German soldiers had used during World War II and there would have been no way for the witnesses to know that as they not only didn’t understand German, but had no knowledge of military talk and orders. What was going on here? It has been suggested that this is a case of a place holding some memory of the past engrained upon it, like images to film, but there is no way to really know, and it is just one more supposedly haunted place littering our history of war.