UFOs, Murder and "Secret Documents" - A Strange Death in Government

May 22, 1949 was the date on which the first U.S. Secretary of Defense, James Forrestal, died. Specifically at 1:50 a.m. As will quickly become apparent, the circumstances surrounding Forrestal’s final hours were (and still are) swamped in controversy. All that we know with absolute certainty is that in the early hours of the 22nd, Forrestal’s body was found on a third-floor canopy of the Bethesda Naval Hospital, Maryland. Did he take a fatal leap out of the window of the 13th floor of the hospital, his mind in turmoil and suicide on his mind? Was it an accident? Or, was Forrestal assassinated? The reason why I mention this is because, for years, there have been rumors that Forrestal knew something (perhaps everything) that the U.S. government was hiding about UFOs in the late 1940s. It wasn’t long before Forrestal began to exhibit psychological problems. Depression, caused by his huge workloads, were said to have been the primary cause. Matters only got worse: the depression deepened, anxiety attacks kicked in, and a notable dose of paranoia overwhelmed him. For the U.S. government, as the Secretary of Defense Forrestal was a major asset to the infrastructure of the United States, this was not good at all. His psychological issues, however, had him secretly marked by President Truman as a potential danger to the orderly running of the Department of Defense. Bit by bit, and throughout 1948, Forrestal’s fraught state of mind got even worse.

Eventually, action had to be taken. And, it most certainly was. Forrestal lost his job as the Secretary of Defense. The next thing for the government was to try and help Forrestal get well. Of course, no-one wanted the man to suffer or plunge into a state of life-threatening proportions. So, a decision was taken to have Forrestal admitted to the aforementioned Bethesda Naval Hospital, where, hopefully, he could recover. Most worrying for Truman’s team, however, was the genuine fear that a destabilized Forrestal just might go off the rails and spill the beans on some of the U.S. government’s most guarded secrets. It was a dangerous and unpredictable time. It would soon turn deadly. Just a few days before he ended up in the naval hospital, Forrestal had a curious experience that had distinct Men in Black overtones attached to it. On the day in question, Forrestal received a visit from one of his friends, a man named Ferdinand Eberstadt, someone who was deeply concerned about Forrestal’s fragile and paranoid state of mind. Eberstadt (a lawyer, a banker, and the author of a historic 1945 document, “Task Force Report on National Security Organization”) was floored by what he saw when he arrived at Forrestal’s home. All of the curtains were closed. Forrestal told his friend – in hushed tones – that listening-devices were all over the house. Sinister characters were watching his every move. His life was in danger. Maybe it was.

To demonstrate this to Eberstadt, Forrestal carefully opened one of the blinds and pointed, knowingly, in the direction of a pair of shabbily-dressed men on the street-corner. “They” were a part of it, Forrestal assured Eberstadt. In no time at all, the doorbell to Forrestal’s home was heard ringing. The last thing Forrestal wanted to do was answer the door. Fortunately, one of his staff was on hand to do exactly that. A brief conversation took place, but which neither Forrestal nor Eberstadt were able to hear. The facts, however, quickly came to Forrestal from his houseboy. According to what the two men were told, the visitor at the door was trying to generate support that would hopefully allow him to become postmaster in his hometown. Could he come in and speak with Forrestal and have him offer some help and advice? Due to Forrestal’s chaotic mindset, the man was quickly sent packing. Eberstadt and Forrestal watched carefully as the man walked directly towards the two badly-dressed men that already had Forrestal in a state of turmoil. It was even more evidence of a conspiracy against him, Forrestal grimly concluded, when he saw the three clearly engaging in conversation.

Maybe the whole thing was blown out of proportion by a man descending into a collective state of paranoia, fear, and nervous collapse. Certainly, that’s what happened. But, it’s worth noting that this odd affair, which occurred during Eberstadt’s visit, has several Men in Black-themed parallels to it. First, the Men in Black are typically described as looking not quite right: they are extremely pale-skinned, they often have bulging eyes (hidden behind wraparound shades), and (very bizarrely) are at times described as wearing wigs and make-up. The inference is that they are not human. Forrestal’s visitor on the day in question was described by his staff as very odd-looking. That the man tried to gain access to Forrestal’s home – by claiming to be seeking support for a potential job as a postmaster – mirrors the 1960s-era reports of MIB finding ways into the homes of UFO witnesses by claiming to be military personnel or police officers. In the same time-frame, Women in Black were posing as census-takers and as gypsies. They were clearly neither. It was a strange and sinister situation for Forrestal. Terrifying, too, for the man whose mind was tragically collapsing. 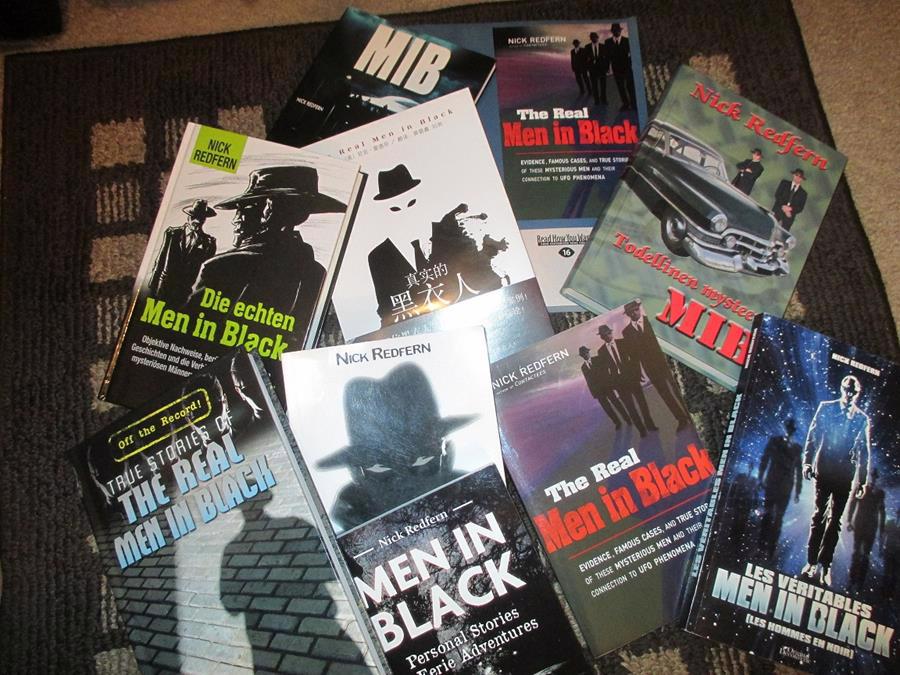 April 2, 1949 was the date on which Forrestal was taken to the hospital – for his own good and for that of the U.S. government, too. It was apparent to the doctors and nurses that Forrestal was in a dangerous state. Forrestal suspected – in fact, he was absolutely sure – that dangerous characters were watching his every move. Who those same characters might have been all very much depended on Forrestal’s frame: sometimes it was Russian agents. On other occasions it was spies in the U.S. government. As for the latter, Forrestal thought it was J. Edgar Hoover’s FBI. Forrestal’s mind was spinning – and far from in a good way. On top of that, Forrestal stopped eating for a while. Not a good sign. It’s important to note that when Forrestal was admitted to Bethesda he was in what amounted to solitary confinement, and the windows of the room were modified so they couldn’t be opened. Notably, when Forrestal’s family inquired why such actions had been taken, Captain George N. Raines, the chief psychiatrist at Bethesda, said it was to prevent Forrestal from leaping out of the windows and killing himself – which, some believe, is exactly what happened on the fateful night that Forrestal’s life met its end.

After a few weeks in the hospital, there was a clear, welcome, improvement for Forrestal. Both the doctors and the nurses concurred. On top of that, his appetite started to return. To the point where - in the presence of Rear Admiral Morton Willcutts, who had come to see his old friend - Forrestal chowed down on a huge steak. It really did appear that good times were ahead. That all changed, however, only two days later. Or, rather, two nights later. Death was just around the corner. It was a death shrouded in mystery. Let’s see what we know for sure about those final hours for someone who held some of the U.S. government’s most important secrets. The man assigned to keep a careful watch on Forrestal was Edward Prise. He was a U.S. Navy corpsman. Such was the length of their time spent together, the pair became good friends. As the night got longer, Forrestal told Prise that he didn’t need a sleeping pill and was going to dig into a book for a while. That too was a good thing. Or, at least, it seemed to be that way. After Prise’s shift was over, he was replaced by another military man, Robert Wayne Harrison, Jr. Forrestal’s end was almost upon him.

At some point into his shift, Harrison, Jr. left the room to run an errand. From that point onward, everything very much becomes murky, unclear – and probably something that will never be fully resolved to the satisfaction of everyone. When Harrison, Jr. got back to the room he was shocked to the core to see that Forrestal was not in his bed. And, the room’s windows were open. Harrison’s Jr raced to the window: the cord of Forrestal’s dressing-gown was tied to the radiator near the window. Clearly, the goal was death by strangulation. It turned out, however, that Forrestal’s weight caused the cord to snap and Forrestal fell ten floors to his death; something that absolutely no-one could have had a chance of surviving. The official theory is that Forrestal – left all alone in his room – took his own life, possibly in a brief moment when his mind swung back to that dangerous state of depression and anxiety. The big question, however, is: could Forrestal have been pushed? The reason: to make sure he could never, ever reveal what he may have been exposed to in government.

A case can be made that Forrestal's death was meant to look like a suicide, when, really, it was a vicious murder. This brings us to an important question: what of the UFO angle to all of this? Well, we have the Men in Black/Women in Black issue. Within Ufology, rumors have circulated for decades that in the lead-up to his death on May 22, 1949, Forrestal was seriously thinking about going public on what he had learned about the UFO phenomenon, after he became Secretary of Defense. It’s important to note that, as the very first Secretary of Defense, Forrestal certainly would have been exposed to the very deepest, darkest and most secret aspects of the UFO phenomenon. And there's a document, too. We should not get too excited, though. The document is one of those frustrating, alleged "secret files" that only whistleblowers can provide us.

The document was provided to father and son ufologists, Bob Wood and Ryan Wood. It was handed over to the pair by another ufologist (Tim Cooper). The photocopied document makes it clear that Forrestal was murdered because of what he knew of UFOs and what he was going to do with all the secrets swirling around his head. The problem is that the document gives us too much material. And, no-one in government - ever - would write a document that basically says something along the lines of: "Please go and kill Secretary of Defense Forrestal because of what he knows about UFOs." Such a thing is absolutely ridiculous. If Forrestal was murdered, the facts would never have been put to paper. In other words, the document is not real. But, it's clearly designed to make it look like Forrestal had to go because of alien secrets. Whether a hoax or disinformation, the document is not the real deal. Of course, this issue of confusing the whole situation about Forrestal, aliens and UFOs may have been the goal.

As for me, I'm pretty sure that Forrestal was killed: there are so many really weird aspects to the whole affair. As for the UFO side of the saga, however, much more has to be found to make a really good, strong case. Anyone up for the challenge?