The search for extraterrestrial intelligence (SETI) took a turn towards messaging extraterrestrial intelligence (METI) recently with the announcement from NASA of plans to beam digitized images of nude humans and an invitation for any intelligence civilizations to respond – the images will be sent by both the Five-hundred-meter Aperture Spherical radio Telescope (FAST) in China and the SETI Institute's Allen Telescope Array in northern California to a region of the Milky Way deemed most likely to have life forms. While that is going on, other researchers claim we may have already received a message from advanced civilizations who visited our area eons ago and left a massive sign of their existence by rearranging another star's planets into a mathematical sequence. Wait … what?

“While it is still debated whether such a purposeful advertisement would be prudent and wise, we propose that mean-motion resonances between neighboring planets -- with orbital periods that form integer ratios -- could in principle be used to encode simple sequences that one would not expect to form in nature.”

The concern for SETI messages being “prudent and wise” has left the building, but in a study published in the preprint journal arXiv, astrophysicists Sean Raymond, Matt Clement and others propose that any civilization capable of traveling across the galaxy has the power and lack of concern to do something dramatic – alter the orbits of planets in a way that future civilizations would recognize as a mathematical model that could not occur naturally. Raymond and Clement were kind enough to explain their theory in layman’s terms in a recent article in Nautilus.

“This would be a cosmic landmark to last the ages, to survive long after the civilization itself was gone. It would need to be detectable, easily recognized as non-natural, and very robust.”

The astrophysicists decide that the best type of solar system for this massive message is one with ‘resonant chains’ of planets whose orbits regularly realign with a nearby planet because their orbital periods form a ratio of two small integers … like 2:1 or 3:1. While a two-planet ratio resonant ratio doesn’t jump out at the casual observer, three or more certainly would – especially in a simple pattern like 1, 2, 4, 8, 16. That would be a clearly recognizable mathematical pattern – but it’s not impossible. In our own solar system, Jupiter’s three innermost large moons—Io, Europa, and Ganymede form a 1, 2, 4 resonant chain, and the exoplanet system HR 8799 has four planets in a 1, 2, 4, 8 resonant chain.

How would advanced aliens move planets into one of these ratios? The study provided a theoretical example where an asteroid is directed to hit a planet, causing it to bounce against a larger planet and exchange orbital energies. They think this is possible – we’ll have to take their word for it – but speculate that an advanced civilization would have a more elegant solution. 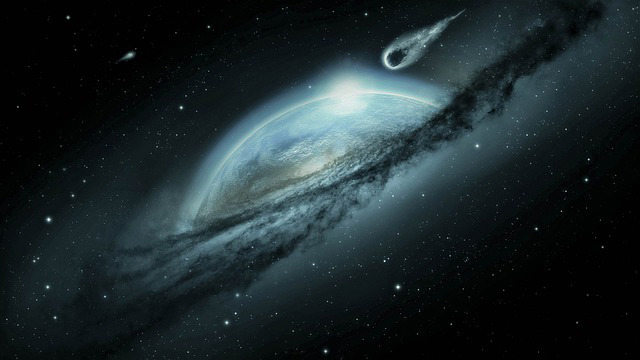 The next question the team asked is whether planets forced into one of these alignments would stay in place for billions of years through the growth and decline of the star they’re orbiting. They found that innermost planets would likely be absorbed into a star that grows into a red giant and then collapses into a white dwarf. However, the outer planets, especially if they’re gas giants, would stay in place in three of the four chains (not consecutive integers) – leaving the planets in a non-natural, easily recognizable, long-lasting solar system configuration.

That brings us to the last question: could we puny Earthlings detect such a resonant chain around another star? The answer is … yes! Raymond and Clement say astronomers could use the current technique of watching for periodic dips in a star’s brightness as the planets pass in front of it – it helps if the planets are arranged in our line of sight. Of course, any civilization capable of moving planets should be able to put them in our line of sight for easy detection … right? Raymond and Clement think so – they recommend that astronomers start searching for alien signals in prime number, Fibonacci or Lazy Caterer sequences.

"What should we do if we find one?"

Ask if they got our naked pictures?

Cryptozoology: Is It What It Appears To Be?