Fans of ‘Doctor Who’ and ‘Star Wars’ should get your “I told you so” responses ready – a new study proposes that the best places to look for life beyond our solar system is not on planets orbiting twins of our Sun but on planets orbiting twins … binary stars may have planetary systems which are more conducive to extraterrestrial life forms. Would you rather live on Tatooine or Gallifrey?

"We were trying to peer as close as we could to the most luminous star in the binary—the primary star—and observe the beginnings of planetary system formation, and we got it, but in a different way."

Edwin Bergin, professor and chair of the University of Michigan Department of Astronomy, explains in a UM press release how he joined with researchers at the Niels Bohr Institute of the University of Copenhagen to analyze data obtained from the ALMA (Atacama Large Millimeter/submillimeter Array) telescopes in Chile collected as they were pointed at the birth of a binary star about 1,000 lightyears from Earth. While it formed, Bergin and the others saw that NGC 1333-IRAS2A is surrounded by a disc consisting of gas and dust that is the early creation of the binary system’s planets. Using those snapshots in time, they created computer simulations going both backwards and forwards in time, as explained in their study published in the journal Nature.

The press release details how the creation of planets in binary systems differs from single stars. While the two stars tango around each other, one is always larger and considered to be the primary star. The primary’s size causes an imbalance in the gravitational pull on the protoplanetary disc which results in intervals where huge amounts of material are pulled into the primary star, causing significant heat that makes the star much brighter than usual – a phenomena visible to astronomers. This cycle of crash, burn and repeat tears apart and rebuilds the protoplanetary disc in a way that changes its chemical composition, resulting in an improvement in the chances for life on the planets that it eventually coalesces into.

“The wavelengths covered by ALMA allow us to see quite complex organic molecules, so molecules with 9-12 atoms and containing carbon. Such molecules can be building blocks for more complex molecules which are key to life as we know it. For example, amino acids which have been fund in comets.”

The bright flashes signifying the disco dance of the stars in NGC 1333-IRAS2A are also smashing the protoplanetary disc into comets – and comets can carry organic molecules around in their ice until they crash into a young planet and distribute them like birds spreading the seeds they’ve eaten by pooping over new fields. The end result is an increase in the chances of panspermia occurring in binary systems. Add that to the estimate that up to 50 percent of the stars in the Milky Way are binaries about the size of our Sun and the odds of finding a life-bearing Tatooine or Gallifrey orbiting them gets a gravitational pull on its probability. 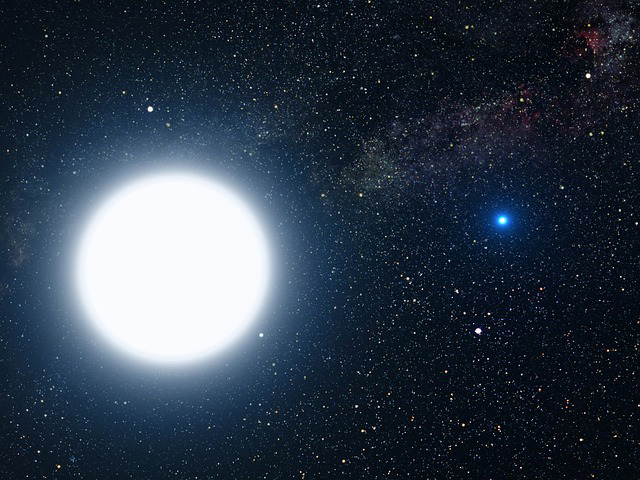 Study co-author Jes Kristian Jørgensen of the University of Copenhagen boosts the odds even higher by showing how the James Webb Space Telescope, which is nearly operational, and the SKA telescope, which is scheduled to be operational by 2030, will join Alma in searching for organic molecules around what now appears to be the best place for life to form – on exoplanets orbiting binary systems. Furthermore, watching for blinking binaries will lead astronomers to binaries that are in the process of creating these exoplanet – giving them the opportunity to potentially watch the formation of life.

Luke Skywalker and The Doctor would undoubtedly agree.