Throughout the field of UFOs there have often been brought forward intriguing and much-debated photos and video footage of alien spacecraft and the aliens themselves. Many of these can immediately be disounted as hoaxes and frauds, but there are on occasion some that seem to really stick into the lore to take on a life of their own. One such piece of footage is apparently a lost clip from a larger controversial video, which apparently shows alien bodies being transported by the military into an ambulance.

In 1995, London-based entrepreneur Ray Santilli released a 17-minute black-and-white film supposedly showing a top-secret medical examination or autopsy of an alien by the United States military in some secret, undisclosed lab. It was presented as actual, authentic footage of a real alien recovered from the 1947 UFO crash at Roswell, New Mexico, which Santilli claimed he had received from an unidentified retired military cameraman, and while grainy, to many it certainly looked like the real deal. The film footage was broadcast in the United States on August 28, 1995, under the title Alien Autopsy: Fact or Fiction, and it was an immediate sensation, raking in record-setting ratings and sparking an intense debate on its authenticity. The film was picked apart by numerous video specialists, forensics pathologists, and special effects experts, including Hollywood SFX wiz Stan Winston, and at the time opinions ranged from that is was definitely real to that it was a definite hoax. 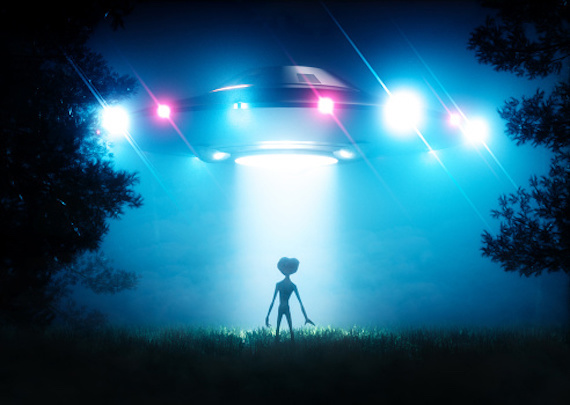 It goes without saying that there was much skepticism aimed at the footage, but through it all Santilli insisted that it was real. In the face of mounting criticism and doubt over what is depicted in the footage, in 2006 Santilli came forward to admit that the footage had been staged, but he did not admit that it was fake, as he claimed it was a recreation of actual footage he had that had deteriorated. He even not only claimed that certain frames of the film were of the real deal, but also claimed that the film was only a portion of a longer, complete and unedited film with additional footage. One portion of the lost film allegedly shows what appear to be alien bodies being loaded into ambulances, and from what is described of it, it seems pretty surreal, indeed.

In the 58-second clip, a large heavy duty Army truck can allegedly be seen in the foreground and a smaller Army ambulance in the background. From the Army truck can be seen several stretchers and coffins being off-loaded and placed between it and the ambulance, where under heavy guard they are being stacked and in some cases opened to reveal dead aliens within before then being transferred to the waiting ambulance. In some cases, these coffins are apparently opened right in front of the camera and the bodies can be seen clearly. One UFO researcher and expert on ET homicides and cattle mutilations by the name of Robert D. Morningstar claims to have seen the footage and analyzed it, and describes an apparent dead alien female, saying:

I believe that there is a Female EBE, demised, to be seen apparently being lifted and removed from a body bag to be loaded into the ambulance early in the film clip. Her physical form, in fact, is quite beautiful and well proportioned: petite, delicate and human-like from the neck down and presenting very fine, delicately chiseled features in her EBE female head, with big black eyes and a pointy triangular chin. Her right breast is beautifully formed, like some of our human females and presenting a very lovely curvature of the back and right buttock in side view. Her pelvis is well formed, clearly defined and distinguishable. This female specimen could well be an early ET/Human hybrid. 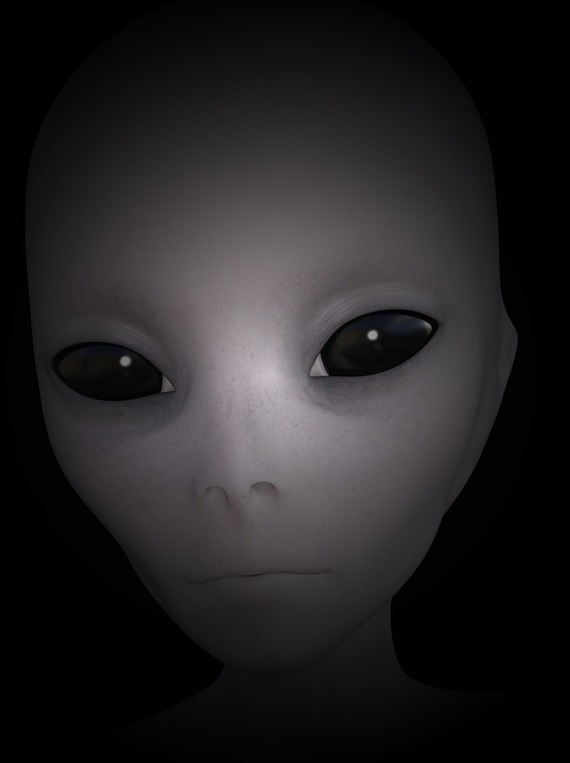 Some of the aliens are described as being not dead, but injured, with two being brought out on litters, one moving about a bit and another described as being “barely alive,” while another alien is apparently alive and well and just sort of wandering around the scene as its dead brethren are loaded into the ambulance. So far, so weird, but it gets even more bizarre still. The most macabre and spectacular claim about the clip is that there are not only dead aliens to be seen, but also dead human bodies in various stages of dismemberment. Wait, what? The human bodies are first seen when the live alien, which is apparently dressed in a black uniform with an MP armband, apparently crouches over an opened coffin, which reveals two dead male bodies in quite the grisly state, and the camera pans around to reveal two dead women as well. Morningstar describes the macabre scene:

At one point the creature crouches down over one of the open coffins or litters (hard to tell which). What appear to be 2 male humans, shown with their chest and abdominal cavities opened and eviscerated are seen briefly being moved on litters toward the ambulance. In one clear frame, one can see several ribs near the heart region have been cleanly cut through as if the ribs, heart and pericardium had been removed whole. One of the victims presents a horrible and tortured expression on his face as if he had been a victim of vivisection. What appear to be at least 2 female human bodies, partly dissected, are viewed at close range as their coffin is opened.

Morningstar tells of these bodies as being in various stages of dissection and mutilation, and describes them in gruesomely graphic, painstaking detail that often lingers on the morbid surrealness of it all. Corpses are described as having various different surgical incisions, limbs that have been sawn off, and excised organs, and there are human body parts strewn about, human torsos hung up on hooks, and other grotesqueries, and it seems like an utter bloodbath. One excerpt from Morningstar’s analysis of the footage reads like something out of a horror movie, saying:

Alongside it, inside the coffin is a severed human left leg (female) and the right leg of what I believe is that of a second body packed under the first one, which I believe now, after viewing this a score or more times, is actually the case. This is followed by close-ups of the back and shoulder region of a coarse & crudely decapitated human torso, demonstrating deep incisions, opening the upper thoracic region of the spine. A few frames later, with the corpse having been removed, there appears inside the coffin, a section of skull partly attached to the visibly identifiable cervical and thoracic vertebrae, stripped of all flesh and surrounding musculature.

The brain stem has been surgically removed from its seat in the cervical region, severed where the medulla oblongata joins and branches nerves into the spinal column. Another decapitated human body is shown briefly. Its head has been surgically and very cleanly severed across the neck as if in one smooth slice done by machinery. A large carcass that appears to be that of a man is seen momentarily seen being lifted and loaded. Its right flank has been sectioned. The side of the abdomen is stripped revealing the outer aspect of the right rib cage, flayed and reflected from the region of the right hip through the length of the body and straight through the right shoulder and arm, which is seen dangling from the carcass with the limb twisted around. A partially severed leg appears in which the front thigh has been dissected and the muscles of the rectus femoris have been excised.

Another leg, a left leg, shin and foot appears and although it may still be attached to a corpse, it has been twisted around and appears with the lower leg and foot pointing most oddly with deep gouges taken out of the instep, with other strips removed, also apparent in the shins and the foot. A few quick, overexposed frames of what appears to be a dissected, exposed human spinal column is seen for just a moment as it is loaded into the ambulance. The distraught faces of two humans who have been handling the bodies appear briefly as the film clip ends. 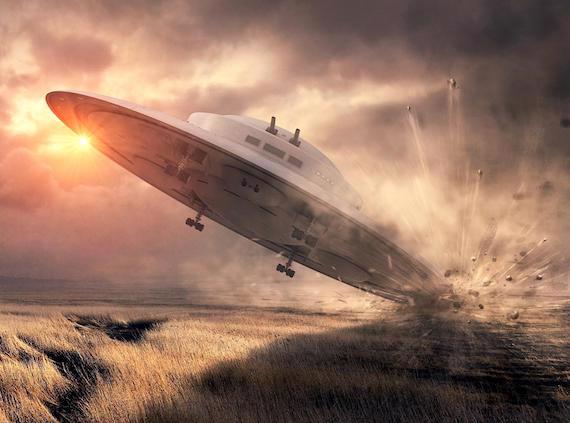 There is much more where this came from, with various graphic descriptions of this carnage, a montage of dead alien and human corpses and body parts to the point that it is almost stomach churning. A big question here is why human bodies? What happened here and why would these bodies be together among those of extraterrestrials? It is never really explained, although it is implied that they are perhaps the recovered bodies of humans abducted and experimented on by aliens. Morningstar claims to have studied this horrific footage, which he calls the “Roswell AA Ambulance (AAA) Loading Scenario,” for 40 hours, and comes to the conclusion that it is authentic, explaining:

I believe that the final clip is authentic and that what is depicted involved the shipment and offloading of the corpses, EBEs and human victims, secretly and under heavy guard to a Top Secret military location, which has yet to be discovered or revealed. One of the lingering “legends” of the Roswell event, reported by Linda Moulton Howe, the late William Cooper and others, is the story of the suicides of several MPs just a few days after the recovery. The gruesome scenes depicted in this film clip would go far in explaining the causes for such actions. That is all that I can say at this time except that if this is an example of what was found inside the Roswell craft or other UFO recoveries around that time, the reluctance of world governments to acknowledge or discuss the issue of the UFO phenomenon publicly is perfectly understandable, and, in the context of the typical psychological mindset of the general public in the 1940s & 1950s, the UFO cover-up was conducted with the best interests of public at heart by ignorant and impotent officials trying to come to grips with the horrific implications of what had been discovered and recovered. Therefore, denial was their only recourse. If the story of the MPs’ suicides is true, what else could they do when battle-hardened men chose to end their lives rather than face the truth, realizing that the government and military had no power to stop UFOs or over their occupants? All they could say was “Nothing happened.” At all costs, they must have judged, the public must never know.

It is all completely sensational, and if true would be a major piece of video evidence, but here is no proof as to the veracity of these claims. The Alien Autopsy video has largely been written off as a hoax, despite many clinging to the idea that it is based on an authentic incident, and there is no real evidence of this supposed secret clip of footage. Is there anything to this at all, or is it just a big sham and another piece of UFO fake news? It is hard to say, but if real it would be a light shining into a terrifying corner of UFO lore.