The Strange Case of Roger Bacon and his Mystical Talking Head

One very notable figure from the 13th century is the English philosopher, scholar, and Franciscan friar Roger Bacon. Considered a pioneer of the modern scientific method, he was a devout advocate of the study of nature through empiricism, as well as an eminent scholar of Aristotle’s works, an influential linguist who was one of the earliest to explain the concept of universal grammar, and an avid proponent of various educational reforms in the era. Bacon’s contributions to early European sciences, linguistics, and academic methods are numerous, but he is also known for being a wizard and for the time he created a bizarre and mystical mechanical talking head.

Beginning from the 12th century, one legendary creation that became prominent in various European works is that of what is called a “brazen head.” Originating with the various ingenious mechanical automata created by early engineers during ancient times and carried on through medieval Islamic science, as well as the Arabic tales about severed human heads or skulls that utter prophecies, these brazen heads were typically fashioned of brass or bronze and with moving mouths, which appeared as mechanical creations but were assigned mystical, magical qualities. It was said that these mysterious devices were all-knowing, and that they could answer any question asked of them by their owners and even predict the future, powered by magic or in some cases demonic forces. Although they were based on real devices created as early as the 4th century BC, such as steam-powered devices and various automata such as moving puppets or singing birds, it was in Europe that they gained a reputation as being more than just machines, but rather mystical oracular devices.

One of the first mentions of the oracular brazen head comes from the 12th century chronicler, William of Malmesbury, who claimed in his History of the English Kings that Gerbert of Aurillac, the man who would become Pope Sylvester II, created a brazen head in the 10th century using his knowledge of astrology and a tome of secret knowledge stolen from Al-Andalus, which at the time was the Muslim-ruled area of the Iberian Peninsula. This head supposedly only spoke when spoken to, and would answer any “yes” or “no” answer directed at it with unfailing accuracy. It was so accurate, in fact, that it supposedly correctly predicted its owner’s death.

From this account the fascination with brazen heads grew, appearing in many literary works and reaching peak popularity during the renaissance period. Indeed, several of the major figures of the 12th- and 13th-century Renaissance were said to have been in possession of their own magical talking heads. The English statesman, scholastic philosopher, theologian, scientist and Bishop of Lincoln, Robert Grosseteste, allegedly created a brazen head through his knowledge of astrology and alchemy that could tell the future. Unfortunately, it self-destructed after giving a prophecy. Albertus Magnus, who was a German Dominican friar, philosopher, scientist, and bishop, and later canonized as a Catholic saint, purportedly came into possession of a breathing brazen head with “a certain reasoning process” from a demon, and is said to have even created a whole brass body for it. This particular head would apparently talk nonstop, with its incessant babbling getting to the point that it was eventually destroyed by Magnus’ student, Thomas Aquinas. Various other figures from the era supposedly had brazen heads with similar powers, including Boethius, Faust, Arnaldus de Villa Nova, Stephen of Tours, and Enrique de Villena, but perhaps the most famous of these was the one supposedly created by Roger Bacon.

One area that Bacon was interested in that sort of diverged from more academic practices and leanings were the areas of astrology and alchemy, two areas that he believed in strongly enough that he even wanted university curriculums to be created for them. Bacon believed that alchemy was an actual science and obeyed the laws of nature, and it was this interest in alchemy that brought him to the idea of trying to create a magical wall of brass around England in order to protect it and make it impregnable to invasion or attack, in his own words “to keep out marauding Danes and other riffraff,” and for some reason he thought a brazen head would help him with this task, perhaps to tell him how to make it or advise him on whether it would work at all. With the help of a Friar Bungay and a servant called Miles, Bacon would spend seven years trying to make a brazen head, described in this case as “a precise brass replica of a natural man’s head, with the inner parts thereof all the parts and organs in a human head,” but he could not get it to actually speak. This is where the story gets even weirder. 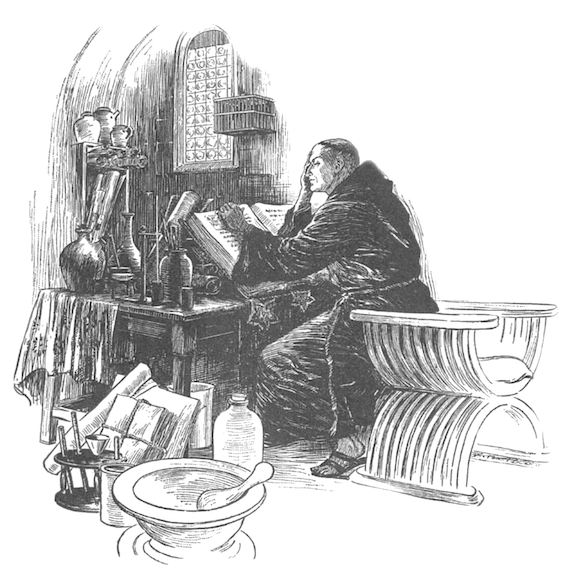 Apparently frustrated with the head’s refusal to talk, Bacon then is said to have summoned a demon or evil spirit, by some accounts the Devil himsel, in order to get advice on how to make it work. The demon then appeared and informed him that the head would indeed speak if it was powered by “the continual fume of the six hottest simples,” with “simples” being types of plants used in alchemy. These various herbs were to be heated in a pot beneath the head, after which their fumes would waft up into it to give it vigor and life. According to the demon, if they did this continuously for several weeks the head would spring to life and speak. They did this dutifully as instructed, and they waited for their head to spring to life for days on end. It is said that one evening Bacon and Friar Bungay were terribly tired from the constant tending of the fire beneath the head and went to sleep, leaving the duties to Miles and telling him to watch the head carefully. The servant would do his best, trying to stay awake by singing, and it was then that their enchanted creation would finally talk, telling the servant, “Time is. Time was. Time is past,” before spectacularly destroying itself before Bacon and the friar could hear it. The book entitled The Famous Historie of Friar Bacon, Conteyning the Wonderful Thinges That Hee Did in His Life says of what happened:

Then followed a terrible noise, with strange flashes of fire, so that Miles was half dead with fear. He dropped his fiddle and fell on his knees, and the room was full of smoke. At the noise the two Friars awoke, they rushed into the cell, and there they saw Miles beating his breast and crying out, and on the floor lay the Brazen Head all in bits, but when the smoke vanished they perceived the Brazen Head lying broken on the ground. At this sight they grieved, and called on Miles for explanation. Miles, half dead with fear, said it fell down of itself. Friar Bacon asked him if it did not speak. "Yes," quoth Miles, "it spoke, but to no purpose. Ye have a parrot speake better in the time you have been teaching this Brazen Head. 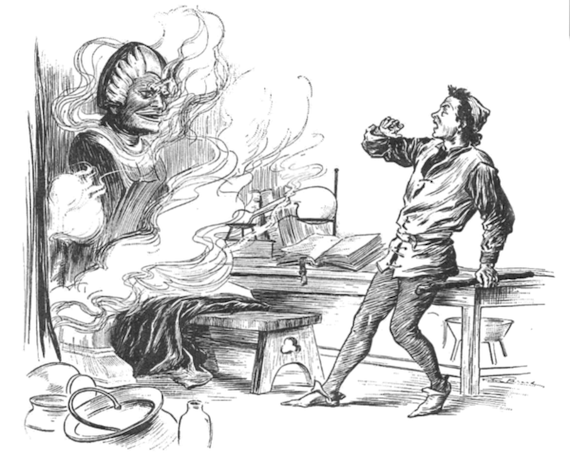 It is unclear of how much of the tale is true, as the story of Bacon and his brazen head only first appeared in the 16th century, long after his death and there is no evidence he ever made an actual brazen head. Nevertheless, it was at this point, starting from the 26th century, that Bacon would gain a reputation as having been a sorcerer and possible Devil worshipper who consorted with demons and evil spirits. His story would go on to be written of in several works, including a play called Friar Bacon and Friar Bungay, in which they are portrayed by playwright Robert Greene as being necromancers and black magicians, and Bacon has maintained a sort of connection with the occult ever since, despite the fact that it is debated just how into the occult he actually was. Is this based on a real event or merely folklore and dark legends built up around a real person? Whatever was going on here certainly seems to be a weird little historical oddity that we may never really get to the bottom of.

Mirror of the Dreaming Mind: Scientists Grapple with How We Solve Problems While We Sleep