Throughout history there has been the fascination with human beings melded with the traits of animals. Tales from far back in time have brought us stories of centaurs, minotaurs, dog-headed people, and much more. We seem to be enamored with the thought of animal parts attached to otherwise normal human features, and this is a common trope across the legends of many cultures. One very weird corner of this phenomenon is that of what are usually referred to as "pig-faced women," a strange tradition that has gone back for centuries, and one especially pervasive case is that of a woman with a pig face who supposedly lurked about the streets of London in the 19th century and caused a mass hysteria.

The legends of so-called “pig-faced” women go way back to the 1630s, when such tales began doing the rounds in Holland, England and France. Such stories usually involved a wealthy woman with the body of a human, but with the head of a pig and some pig-like behaviors, such as eating from a trough or grunting. In the earliest forms of the stories this was thought to be the result of being cursed with black magic, often following the pattern of a wealthy, beautiful pregnant woman being cursed by a witch for calling her children ugly, after which she gives birth to a normal healthy girl with a pig’s head. Such stories proliferated through these regions at the time. Although almost certainly based in legend and folklore, as such tales became more widespread, many began to believe that these pig-faced women were actually real, with many cases of these supposed individuals hiding away out on the fringes of society, but perhaps the most famous and influential of these is that of the pig-faced woman of Manchester Square. 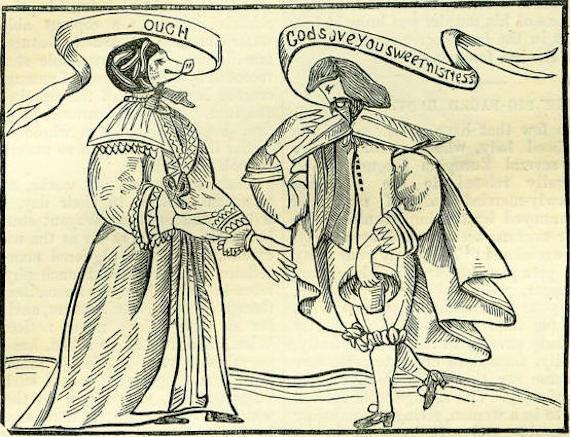 By the early 19th century, stories of supposed pig-faced women were all the rage in London, and in 1814 there began a rumor that one of the beasts was making appearances at a place called Manchester Square, an 18th-century garden square in an upper class, inner-city area of central London called Marylebone. The picture of wealth and affluence at the time, and surrounded by London’s stateliest 18th century Georgian architecture, it might seem like an odd place for a woman with a pig’s face to appear, but sightings just such a woman began to appear in news publications at the time. People were prolifically reporting what appeared to be a noblewoman who was walking about the cobblestone streets or riding about in a carriage with heavy black curtains, her demeanor, body, and clothing all elegant and posh, but with the head of a pig, usually covered by a veil. On occasion, reports were made of people seeing the woman with her pig-like visage staring out from her window, only to quickly pull the curtains shut, and she was said to play the piano beautifully, with passerby moved to tears by her haunting melodies wafting out onto the street from within the residence. One description from the time reads:

This extraordinary Female is about 18 years of age – of High rank & great fortune. Her body & limbs are of the most perfect & Beautiful Shape, but, her head & Face resembles that of a Pig – she eats her Victuals out of a Silver Trough in the same manner as Pigs do, & when spoken to she can only answer by Grunting! Her chief Amusement is the Piano which she plays most delightfully.

Before long, there were sighting reports pouring out of Manchester Square by people who swore they had seen her, with these reports further fueled by newspaper accounts that were presented as very real and genuine. On top of this, a supposed leaked biography from “a female who attended on her” appeared, which further fleshed out the pig-faced lay’s background by claiming and that she was a noblewoman of Irish descent and kept servants that she paid a small fortune in return for keeping her bizarre secret. There were even advertisements in papers looking for servants to take care of her, as apparently the turnover was pretty fast as these people found themselves unable to bear being in the presence of such a monstrosity. One such ad in the 9 February 1815 edition of the London Times reads:

For the attention of GENTLEMEN and LADIES. – A young Gentlewoman having heard of an advertisement for a person to undertake the care of a Lady who is heavily afflicted in the face, whose friends have offered a handsome income yearly, and a premium for residing with her 7 years, would do all in her power to render her life most comfortable, and undeniable character can be obtained, from a respectable circle of friends: an answer to this advertisement is requested, as the advertiser will keep herself disengaged.

By this time, most Londoners believed in the pig lady’s existence as fact, making her the talk of the town and more than mere lore, and it became popular for newspapers of the day to publish portraits of the mysterious pig-faced woman. There was even a letter sent to the London Times from a man wishing to propose to the mysterious woman, complete with a one-pound note to have it published. This apparently went a little too far for the newspaper, and they would not only refuse to publish it, but also put out an ad ridiculing the request. The ad reads:

There is at present a report, in London, of a woman, with a strangely deformed face, resembling that of a pig, who is possessed of a large fortune, and we suppose wants all the comforts and conveniences incident toward her sex and station. We, ourselves, unwittingly put in an advertisement from a young woman, offering herself to be her companion; and yesterday morning, a fellow (with a calf's head, we suppose) transmitted to us another advertisement, attended by a one-pound note, offering himself to be her husband. We have put his offer in the fire, and shall send his money to some charity, thinking it a pity that such a fool should have any. Our rural friends hardly know what idiots London contains. The pig's face is as firmly believed in by many as Joanna Southcot's pregnancy, to which folly it has succeeded. Though no Parson Tozer has as yet mounted the rostrum to preach in support of the face, there is hardly a company in which this swinish female is not talked of; and thousands believe in her existence. 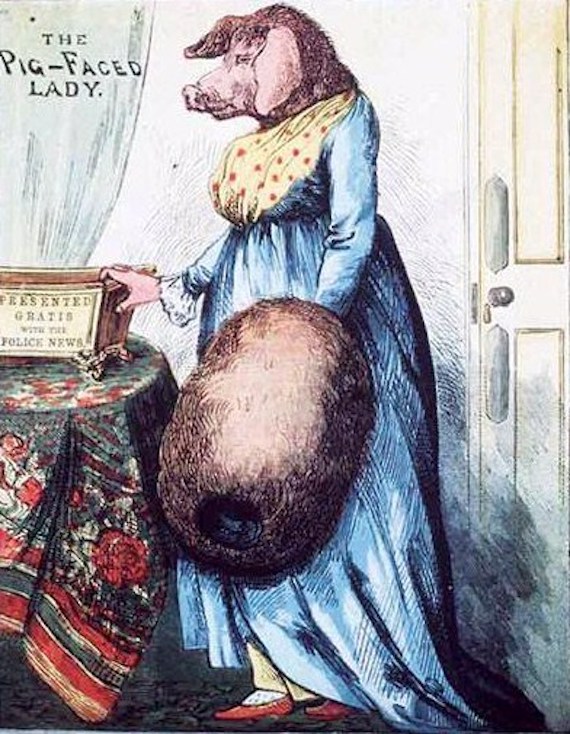 At this point, the London Times was thinking it was all a bit too much and actively trying to debunk and squash the rumors of the pig-faced woman, despite the fact that they had been publishing supposedly true stories on her up to then, but now writing it off as hogwash even as other news publications continued to publish sightings and speculation about her, with rival newspapers even putting out the rejected marriage proposal. Indeed, there would be many more, sometimes very spectacular encounters with the pig-faced lady. In one such incident, there was a mass sighting of her when a huge crowd of people attending a celebration of the end of the Napoleonic Wars in Piccadilly Circus claimed to have seen her sitting in her carriage at an intersection, and that she had sped off when the mob tried to gather around her and stop her. Another account came from a baronet by the name of William Elliot, who claimed that he had actually visited the pig-faced woman at her residence and had met her in her drawing room, where she allegedly attacked him and bit him on the neck after he had recoiled in horror at her appearance.

Reports of these and many more like them kept belief in the pig-faced woman strong, even as the London Times actively tried to denounce the credibility of it all. People believed in it so much that there was a mass hysteria going on, including mobs of people gathering at homes that were rumored to be hers and chasing carriages that she was purportedly riding in down the street. There were practically riots breaking out because of it, the whole thing spinning out of control. The pig-headed lady of Manchester Square craze burned throughout 1814 and well into 1815, in the end producing thousands of reports, before suddenly waning and fading away. What was behind this all? Was this an actual woman with perhaps some deformity? Or was it merely an hysteria born of urban legends and rumor? We may naver know for sure, and no matter what the case may be, between the years of 1814 and 1815, a pig-faced woman, real or imagined, held London in a state of fascination and near panic.