History is full of mysterious real figures from history whose stories have become fused into myth and legend. It seems that some people from the mists of time have a way of becoming larger than life and spawning tales of magic and supernatural powers, with often very little to guide us through what is real and what is pure fantasy. One such intriguing figure comes to us from 13th century Scotland, involving a very real person who has somehow become know as having been a powerful, demon-summoning wizard who still haunts the area to this day.

Located out in a remote and forbidding area of the border region of Scotland is the imposing Hermitage Castle. This rather spooky and sinister looking fortress is pervaded by a dark atmosphere and deep history going back to the 13th century, when it was sometimes called “the guardhouse of the bloodiest valley in Britain” due to its location among turbulent battlefields. The castle itself was erected in around 1240 by the Scottish Border noble Nicholas II de Soules, to protect the strategic valley of Liddesdale from the English, giving it the nickname “Strength of Liddesdale.” It would later pass on to his son, William II de Soules during the First War of Scottish Independence, and it was from here that Hermitage castle would begin to gravitate towards itself tales of demons and black magic.

William II was a Scottish Border noble who had quite the family pedigree, being the son of Nicolas II, cousin of Alexander Comyn, Earl of Buchan, and the nephew of John de Soules, Guardian of Scotland. William II had once been loyal to the British side and had even had a knighthood bestowed upon him in 1312, but changed sides in 1314 after the army of King of Scots Robert the Bruce were victorious against the army of King Edward II of England at the Battle of Bannockburn. William II would go on to become Lord of Liddesdale and Butler of Scotland, and he even had a claim to the throne, then occupied by Robert the Bruce, who would become his bitter rival. In 1320, William II became involved in a conspiracy to usurp King Robert, was arrested, and died of mysterious causes while a prisoner at Dumbarton Castle while his co-conspirators were drawn behind horses, hanged, and beheaded, but some of the dark tales surrounding him suggest more to it all, and these begin with his inheritance of Hermitage Castle.

As soon as he gained control of the castle, William II allegedly began to massively renovate the place, heavily fortifying it and arming it to the point that it was well-nigh indestructible. This was already generating rumors that William was a sorcerer and using the dark arts to help him fortify the castle, and it would only get worse from there. During this time, he was said to be a horribly cruel taskmaster, torturing his men and workers and committing all manner of atrocities against those around him while reveling in debauchery and depravity. Some of these men were said to disappear without a trace, used as sacrifices in rituals carried out in the dimmest corners of the castle, only furthering the rumors that William was a warlock, and there were those who claimed that the castle was actually sinking in order to hide its sins from God. Before long, it was being said that William was kidnapping children and young maidens from the countryside to use in his evil rites, making the castle a source of great fear for the locals, who gazed upon its bleak stone walls and wondered what manner of horrors they contained.

There were soon numerous stories that emerged about William de Soules’ purported black magic and his mystical powers. One was that he kept a magic iron chest within a dark subterranean chamber, with which he could summon demons and even the Devil himself by banging on it three times. He was also said to be impervious to steel weapons, and that no ropes or binds could contain him, the result of spells he had cast to protect himself from the enemy. So great were his powers that he was said to have defeated a giant called the Cout o' Keilder, who was supposedly immune to weapons but was knocked into a river a drowned by William.

One of the main powers attributed to William II de Soules was that he was said to consort with various demons and evils spirits, conjuring them up from their dank realms to do his bidding. The most famous of these was a familiar spirit William kept around called Robin Redcap. In Scottish folklore, the creatures known as Redcaps are described as being sinister, murderous demonic goblins with long prominent teeth, talons like eagles, large fiery eyes, matted hair streaming down the shoulders, and usually depicted as wearing iron boots and a red cap, which needs to be regularly infused with blood lest the demon die. Not nice. They are usually portrayed as being superhumanly strong and fast, immune to normal weapons, and are always said to haunt old, ruined castles, indeed it was sometimes said that every such castle in the south of Scotland was inhabited by one of these malicious spirits. Redcaps were seen as malevolent monsters prone to running amok on killing sprees in the countryside, and this is exactly what William’s Robin Redcap was good at, slaughtering indiscriminately and murdering anyone William commanded it to. 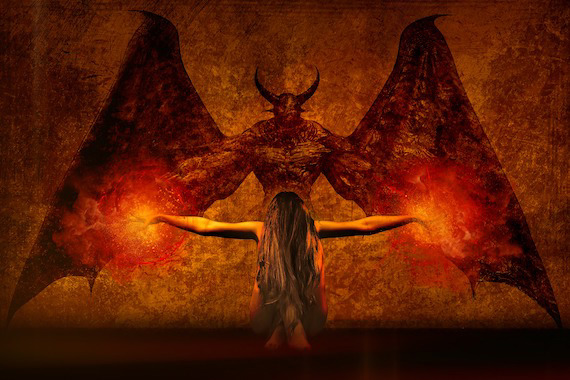 The locals became so terrified of William and Robin Redcap that they supposedly implored the King to do something about it, but when a messenger was sent he was purportedly promptly walled up within the castle alive. After this, the story goes that the peasants took matters into their own hands, procuring a spell book from Michael Scot, the "wizard of the North,” another supposed warlock and sorcerer, who told them that he could be killed by being boiled in molten lead. A mob was gathered to capture William, wrap him in magical chains, bring him to an ancient megalithic stone circle called Ninestanes Rigg, and boil him alive in a giant cauldron of molten lead. Despite this, Robin Redcap is said to haunt the castle to this day, and the ghost of William de Soules is said to appear every seventh year accompanied by the disembodied screams of his victims. It is unknown how true any of this is, and it has been widely debated as to where such tales originate from, but one thing that is for sure is that it is all a pretty wild tale entwining a real historical figure with the supernatural.