If there was a Guinness World Record for most times being abducted by aliens (there isn’t), a strong candidate for the title would be Russ Kellett, a British UFO researcher who claims he’s been taken to extraterrestrial ships 60 times over the past 40+ years. If there was a world record for tallest aliens to visit Earth, Kellett thinks it would be the 15-foot-tall Dragos, who have been his primary abductors. When they take him into the ship, do they have to bend down to fit through the door? Let’s find out!

“I’ve been gone for years, and people don’t realize, as four hours here is four years on one of the planets I’ve been to. It’s honestly no wonder why I used to be so tired in my day job, the amount of time I’d be gone for!”

That excuse for why you fall asleep on the job may not work with your boss, but Russ Kellett apparently used it before he became a full-time “super soldier” fighting aliens around the world. You may remember in October 2021 Kellett invited celebrities to the site of the so-called Welsh Roswell sightings to help him summon UFOs. (Does someone with 60 abductions really need help? Doesn’t he just need to walk outside?) This latest sharing with the Daily Star may be connected to a previous abduction story from 2020 when Kellett claimed he bumped into singer and fellow abductee Robbie Williams on a spaceship. He said then that seeing Williams comforted him because he was inexplicably given a weapon and sent “on some sort of military mission.” He didn’t remember much else, but he does now.

“I went through a tunnel that I’d never seen before, and the next thing I knew, I was in what looked like a dentist surgery, with 15ft tall alien men, that look very much like Dracula without the sharp teeth, surrounding me. I had some sort of tube pushed down my throat, and whatever liquid they pumped into me, it turned me into one of their super soldiers.”

This may sound like a tooth extraction hallucination but Kellett provided drawings of the Dragos to support his case. While he himself doesn’t look like a super soldier (see his photos here), Kellett claims that one strange drink enlisted him in a super army that has sent him to fight around the universe and in different times – yes, these aliens can time-travel too. It also seems they have some sort of alien spreadsheet where they keep track of who he’s fought, where he's been, and possibly his total kill count.

“Each time I’ve been abducted, I’ve been transported to a room covered in checks, kind of like a chessboard.”

“There are so many different races, but I struggle to remember the names of them all.”

We know the feeling, Russ – it’s hard for us to keep all of your stories straight too. For example, if, as you say, these aliens are at war with another race and are recruiting more humans to transform into middle-aged, slightly overweight super soldiers like yourself, why are you trying to get celebrities to summon them? Have they promoted you to recruiter?

"I would rather my truth get out there rather than other people's lies." 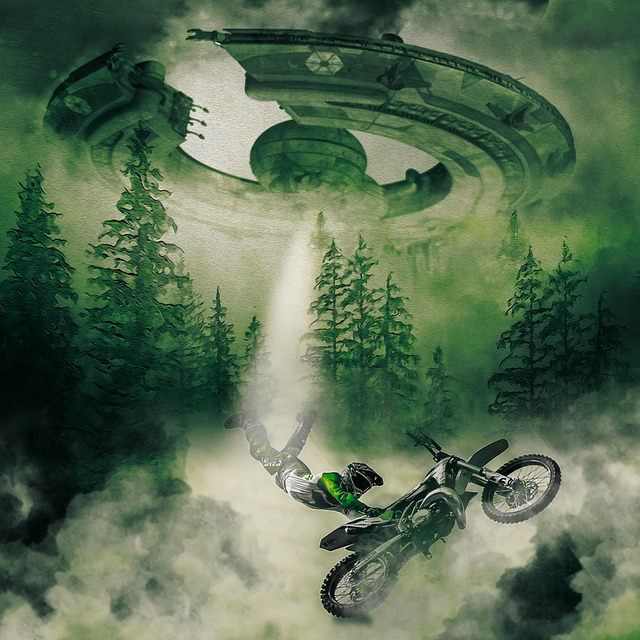 Part of that truth he tells Yorkshire Live he’s trying to get out is that Russ Kellett has a couple of new books for sale. “Russ Kellett is E.T. Rider,” released in 2021, tells of his “countless close encounters with alien craft and abductions by an alien race,” including an abduction in his teens while he was riding his motorbike – a partial inspiration for the title. He is also promoting “The Berwyn Mountains UFO Cover Up - Alien Invasion Wales” about the Welsh Roswell. What better way to sell books than with celebrities participating in a UFO summoning at the same location?

Russ Kellett has been telling his own abduction stories and investigating those of others for decades, and his accounts are certainly interesting. His new book on the Berwyn Mountains UFO incident is the result of 30 years of research and he claims to have discovered "damming evidence of a cover up." Let’s hope that one day he get a camera with a tall-angle lens to get some photos of those 15-foot Dragos.