While all eyes will be on the U.S. congressional hearing on unidentified aerial vehicles scheduled to be held in Washington D.C. next week, those looking for a good preparation would do well to look to the north to Canada, where CTVNews.ca revealed that the country’s then Minister of Defence received a briefing on UFOs back in June 2021—a briefing that the media has now made public which shows Canadian commercial pilots have had many UFO encounters and the Canadian military is serious about investigating them. Is Canada ahead of the U.S. in UFO research and disclosure? 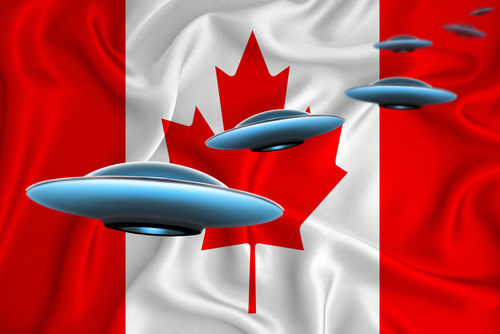 “I believe it is prudent to request a full briefing for Minister Sajjan from the Canadian perspective on this issue.”

Harjit Sajjan is a former CAF lieutenant-colonel and the current minister of international development. In May 2021, Sajjan’s then chief of staff George Young saw the flurry of activity in the U.S. government surrounding military UFO reports and demanded a briefing be put together. CTVNews.ca recently obtained the briefing after numerous requests and found it reported there were about 1,000 UFO sightings annually in Canada. Commercial and military pilot sightings are made to the Civil Aviation Daily Occurrence Reporting System (CADORS) which is available to the public. Canadians interested in UFO sightings by the general public can check with Ufology Research, the organization operated by prominent UFO researcher Chris Rutkowski. Rutkowski was involved in compiling data for the Defence Minister’s briefing (read it here), which included examples of unexplained UAPs in Canadian airspace.

- 23 December 2018 (Yarmouth, NS). Lights were reported by both a witness on land and one at sea. Three primary radar returns were recorded at the observed location.

In addition, the briefing revealed that the Defence Research Board (DRB) conducted research into reported flying saucers near North Bay, ON, in the 1950s, and responsibility for UFO reporting in the 1960s went to the National Research Council (NRC), which was supported by the RCMP. Rutkowski’s name figures prominently in the briefing – in 1995 the NRC and RCMP stopped their investigations and ‘Non-Meteoric Sightings’ reports switched to Rutkowski and the University of Manitoba, which to this day assists in archiving his Canadian UFO Survey files.

That 2021 Canadian briefing should be a template for the 2022 U.S briefing. It describes how the various organizations work together to share UAP data -- NAV Canada manages UAP-related reporting, CAF (via NORAD) monitors and tracks all air traffic approaching and traveling through North American airspace, reports of unidentifiable occurrences are done via a CIRVIS (Communications Instructions for Reporting Vital Intelligence Sightings) report directed to the nearest Air Traffic Control or Flight Information Centre, and CIRVIS reports related to UFO/UAP are directed to Chris Rutkowski. It sound like the Canadian government has a UFO reporting and investigation system in place and working well, doesn’t it?

“We are long past the era of UFOs being a subject of ridicule. Well-trained observers have reported sightings of UFOs and UAP and there seems to be a renewed interest by both scientists and the military establishment in taking a closer look at this persistent phenomenon.”

“We believe the government should adopt a streamlined, whole-of-government approach to standardize the collection of reports across numerous departments and contractors, such as NAV Canada. Efforts should be undertaken to investigate and make those findings public in a responsible manner.”

Again, this sounds like a perfect blueprint for the Pentagon’s investigations into UAPs and reporting the data and conclusions to Congress and the public. Let’s hope they follow it. Kudos are also in order for CTV News and its reporting team for doggedly pursuing and eventually obtaining the Sajjan briefing.