UFOs, Aliens and the Human Soul : The Demonic Side of the Mystery

Over the past couple of weeks I've focused on the potential origins of the UFO phenomenon, such as the possibility that our "aliens" might actually be time-travelers from an Earth far in our future. And, I took a look at the "robot" angle - that the alien Greys might be nothing less than biological robots. There's another theory, too. And, it's one of the most sinister of all: the theory that the UFO enigma is demonic in nature. Could such a thing really be true? Well, let's look at the available data. I should stress that back in 2010 I wrote a book on this very subject titled Final Events. I pointed out, however, in the book that while I wasn't personally a believer in the demonic side of Ufology, I did feel it was an important  issue to address - and address it deeply. And that's exactly what I did. With that said, let's look at the data in-hand. We'll begin with none other than Bob Lazar - of Area 51 fame. His words suggest there might be nothing less than a grim "soul-stealing" aspect to all of this. It’s a fact that most people who have studied the claims of Bob Lazar focus their attentions on what he had to say about the UFOs allegedly held at S-4, as well as his statements concerning Element 115. There is one issue that doesn’t get the attention that it really should. It’s a part of Lazar’s story that takes things down a path that is filled with disturbing revelations involving the afterlife. One of the many briefing papers that Lazar said he read at S-4 stated that the aliens refer to us, the human race, as what we would call “Containers.” But, containers of what? Well, that’s where things get really controversial. Lazar told KLAS-TV’s George Knapp “religion was created so we have some rules and regulations for the sole purpose of not damaging the containers.” There followed an awkward conversation which saw Knapp pressing for answers, and Lazar almost squirming because of the nightmarish nature of the story. That’s hardly surprising, because the claimed big secret is that the aliens have an interest in the human soul. Worse, though, they allegedly use the human soul in a way that the U.S. Government doesn’t fully understand. Or, that the government does know, but does not know how to tell the world the awful truth. One of the theories is truly terrifying: that the aliens “feed” on the human soul, on our life-force.  In this scenario, the earth is a farm and we are the cattle. On our deaths our souls are reaped and the life-energy sustains the aliens. Far out? Definitely. But, Lazar stands by what he read in those briefing papers. The soul angle has led some UFO researchers to believe that the aliens are actually nothing of the sort. Rather, the theory is that they are high-tech demons; it’s an issue we will come to shortly.

George Knapp was not the only person who Bob Lazar spoke to on this issue of containers. Michael Lindemann is the author of a 1995 book, UFOs and the Alien Presence. He also questioned Lazar on this controversy-dominated aspect of the story of Lazar and Area 51. Lazar added a bit more to the story, when speaking with Lindemann, as the latter acknowledged in his book. He noted that Lazar said the containers were “extremely, extremely unique,” that they were “very difficult to find,” and that the biggest secret of all revolved around our souls. No wonder that the people in the know at Area 51 didn’t know how to tell the rest of the world the story they were forced to sit on – out of fear of worldwide anarchy breaking out, if it was revealed that religion was a creation of ancient extraterrestrials who devour our souls. Probably the one person more than any other who concludes that the alien presence on our planet is driven by something very sinister is Nigel Kerner. He has written two books on the subject. They are The Song of the Greys and Grey Aliens and the Harvesting of Souls. Combined, they make a worryingly persuasive argument for the theory that aliens somehow “use” the human soul. Danielle Silverman, Kerner’s assistant, prepared the following for me on his theories and conclusions. She stated that Kerner…

“…went on to delineate a fascinating concept, explaining that a ‘soul’ might be a derivational information field that comes out of a natural cadence that came into the Universe with the big bang. This field holds the power to maintain information in what he called a morphogenetic electro-spatial field with an eternal scope of existence in whatever form circumstance allows. The soul is thus an ancestrally contiguous and coherent mechanism for holding information. Nigel argued that if the Greys are an artificially created and manufactured roboidal form then they would find our facility for ‘soul’ an analogue of their own creators. This would be an analogue that they would want to try to combine with their own natures themselves. The ‘Greys’ he argued were synthetic biological programmed artificially intelligent machine entities sent out as super intelligent robots far more advanced than those we now ourselves send out to explore the Universe.

"They are, however, subject to wear and tear as indeed are all atomically derived entities through the second law of thermodynamics which drives them into greater and greater states of decay with time. A non-atomic property however, such as ‘soul’, is immune to the second law. Thus this property was their ultimate goal, their ‘holy grail’ so to speak. It was a property that they could never know or understand in its own terms as purely atomic artificial creations. Their only perception of it was the effect it has on atoms, the difference in other words between a naturally living entity and their artificial state. Ironically, what these artificially intelligent entities are seeking is eternal survivability. The Greys and any physical life that they might reconstitute from the DNA codes they carry on behalf of their creators, cannot access the state beyond death. They have no ‘soul’ they cannot be born. They are trying to use us as a bridge into ‘soul’ writing their programs into us through genetic engineering and implantation so that through us they can tap into an eternal existence.”

It’s notable that far more than a few people in the field of alien abductions have commented on this soul-reaping program of the aliens. Whitley Strieber, the author of a 1987 best-selling book, Communion, came to believe that the human soul was an integral part of the abduction experience: he concluded that the visitors had the ability to manipulate the soul, even to recycle it into newborns. Whitley Strieber is not the only writer-researcher on the alien abduction issue to have made a deep connection between the phenomenon and the human soul. Another was the late Dr. John E. Mack, a Harvard University professor, who was killed by a drunk driver in London, England in 2004. Mack wrote two books on the subject, Abduction and Passport to the Cosmos. One of Mack’s many patients was a man named Greg. He told Mack of an experience of the abduction type – but not with the typical small, large-headed, black-eyed aliens that have become known as the Greys. No, Greg’s encounter was with tall, scaly creatures that resembled the monster in Universal Studios’ classic movie of 1954, The Creature from the Black Lagoon. In UFO terminology, they are known as the Reptilians. Greg confided in Mack that he felt the lizard people he encountered were trying to extract his soul from his physical body.  Another of Mack’s patients, Isabel, talked of aliens that can “fool you into handing over” your soul.

It’s also worth noting the experience of Sergeant John Healey, of the U.S. Army Reserve. On the night of October 18, 1973, he encountered a brightly-lit UFO, as he and his colleagues were on-board a UH-1H helicopter, rapidly closing in on Cleveland Hopkins, Airport, Ohio. In the aftermath of the encounter – which, in essence, was a near-collision between the two craft – Healey had several weird out-of-body experiences, as he told to UFO investigator, Jennie Zeidman. It was, he explained, as if he was dead in his bed, and that his spirit was above him, staring down at his sleeping form in the bed. That Sergeant Healey’s experiences occurred not in relation to the abduction phenomenon, but to a UFO sighting, suggests that other components of the UFO issue come into play when it comes to the relationship between UFOs, life after death, and our souls. Notably, several members of the helicopter crew were later contacted by representatives of the Department of Defense, who exhibited interest in – and deep concerns about – the UFO / soul-ingestion angle. This suggests a disturbing scenario: that certain elements of the U.S. Government may know something of the origins and agenda of the paranormal parasites. In fact, as we’ll now see, that’s exactly how it seems: the U.S. government may know all about these menacing energy-eating entities that intrude upon our world. And, finally...

Ray Boeche is both a priest and a former state-director (for Nebraska) of the Mutual UFO Network, MUFON. He is someone who believes that the UFO phenomenon has demonic – rather than extraterrestrial – origins. In November 2001, Boeche met two physicists working on a classified program buried deep in the heart of the U.S. Department of Defense. The story told to Boeche revolved around attempts on part of the people in that same program to contact what they termed “Non-Human Entities.” Some of us might call them aliens. Others, though, might suggest they are demons. Are we all destined to be used in a Matrix-like afterlife world? And, are the Greys reaping our souls? I don't know. But what I do know is that more than a few people in the U.S. government believe this is exactly what's afoot. Let's hope they're 100 percent wrong. 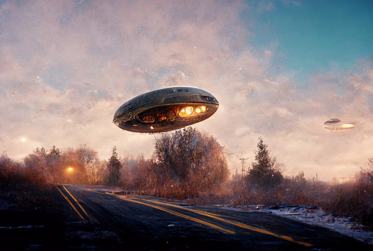