A Strange Report of Alien Encounters at Underground Military Bases

Military bases, with their secretive natures and security clearances, often seeming to operate in the dark beyond the public eye, have always drawn to them tales of conspiracies. It sometimes seems that there is not a single military base that doesn't have at least some dark rumors swirling about it involving strange experiments, UFOs, and aliens. For the most part these just remain lore and more or less urban legends, but they become more interesting when actual people who were supposedly there step forward to talk about the outlandish things they've seen at such places. One such very odd case comes from a witness who claims to have had several surreal encounters with aliens in secret underground facilities beneath two U.S. military bases.

The report in question was released by the radio station KPFA-FM, in Berkeley, California, during a 4-hour show on UFO phenomena. The station itself is part of the Pacifica Foundation, which was founded in 1947 and is a non-profit organization that owns several non-commercial, largely non-censored, alternative listener-supported radio stations. These stations are known for being rather off the grid and the last bastion for free speech and activism, as well as pioneers of First Amendment rights, so it makes sense that they might be more inclined to open up about their more fringe experiences on such a station. According to UFO researcher Elaine Douglass, in this case, KPFA-FM had acquired tapes of an interview taken in April of 1981 with a man who claimed to be a Vietnam veteran, former Green Beret, military medal-holder, and construction contractor who had done work at military facilities such as Nellis, Scott, Edwards, and Andrews Air Force Bases, and had quite the tale to tell. According to him, he had had two separate encounters with alien beings there, the first being at Edwards Air Force Base, in the Antelope Valley of Southern California.

Edwards Air Force Base is the home of the Air Force Test Center, Air Force Test Pilot School, and NASA's Armstrong Flight Research Center, and is involved in all manner of research and development of flight technology, as well as testing and evaluating aerospace systems from concept to combat. Many experimental aircraft are tested here, with some historic occasions such Chuck Yeager's flight that broke the sound barrier carried out at the base. According to this witness, it also has an expansive underground network of tunnels and labs that are up to top-secret research involving crashed extraterrestrial spacecraft and aliens.

On the tape, the witness claims that the underground facilities he had seen during his contract work were “definitely not normal military structures,” and that they featured very thick concrete walls, unorthodox oval door ways with doors that electronically slid open and shut, and arrays of bizarre equipment the likes of which he had never seen. He describes various laboratories and high-security areas he was not allowed to access, the whole place giving off a sinister vibe and feeling very much like a place he didn’t feel welcome in. The size of the facility itself he could not say, but he estimated, judging by the time it took them to get from the top of the elevator to the bottom, that it went at least 30 stories down. It was as he walked the halls with his colleague that they wandered into an area they felt they were perhaps not supposed to be in, and that was when they had their bizarre encounter with an alien. The witness says:

We were walking down a hall, and these doors opened and there was a very particular person or things that caught my eye for an instant. This man was over seven feet tall. I’d say between 8 and 9 to 10 feet, wearing a lab jacket and talking to two human engineers. This man’s arms were almost down to his knees! It threw me into shock. It was definitely not human. He had big slanted eyes. A big head. Fingers were extremely long. Greenish skin. I saw him for just a few seconds. Three-quarters of its face is what I saw and I said, this guy would make a hell of a basketball player! And then the doors closed. Security saw us and told us to get out of there. The next day I walked off the job. After that I said, ain’t nobody pulling the blanket over my head anymore. l know what’s going on now. l know what I saw at Edwards is real. Somebody’s playing games with us. 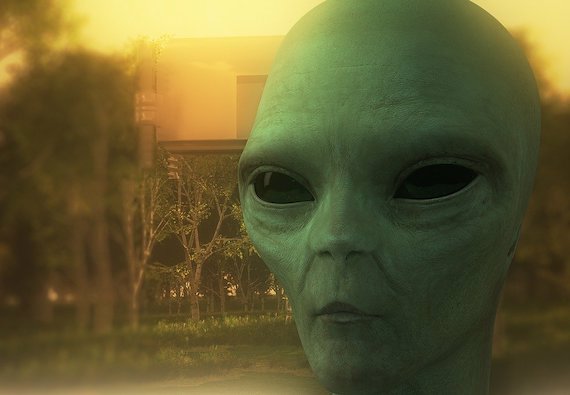 The witness’s second encounter allegedly happened at the China Lake Naval Air Weapons Station, located in the Western Mojave Desert region of California, approximately 150 miles north of Los Angeles. The base was originally called the Naval Ordnance Test Station, and is involved in a variety of research, testing and evaluation programs for the U.S. Navy. The sprawling site covers a massive 1,100,000 acres, an area larger than the state of Rhode Island, has 19,600 square miles of restricted and controlled airspace, and according to the witness it also has a vast secret underground facility holding aliens and alien tech. It was as he was doing work there with some colleagues that he purportedly saw aliens for the second time in his life, and he explained of what happened:

They security thought we had left–me and two other guys. But we decided to stay over and finish this job. We walked past a hangar and we could see through a window,” the witness said. One of the guys I was with, Paul, he saw them first. He said, ‘Come here! Hurry up! I want to show you something!‘ And we looked in the window and there are these four little grey guys about 3 feet tall. Right then, security saw us and they told us, ‘We thought you guys left.’ And they escorted us and said, ‘You’re not allowed around this hangar. This hangar is off- limits to everybody. You’ll get yourself shot.‘ And it messed with Paul’s mind so much that every chance he got he snuck over there. He finally got caught and was kicked off the base. About three months later they found him mysteriously dead in Orange County. This kind of put a scare in me. I know why not to mess with something.

The witness insists that his story is true, and apparently throughout the interview seems very sober and sincere. When the segment was originally aired on the KPFA-FM UFO program it generated so much interest that were planning on broadcasting it again, but shortly before they were to do this they allegedly got a message from the KPFA-FM program producer Ralph Steiner, somberly stating, “Do not re-broadcast the tape. Persons whose testimony is on the tape have been threatened and their lives are in danger.” Was the radio station silenced, and if so by who? There is very little to verify any of this, and it could all very well be someone playing a hoax and having a laugh at everyone's expense, but it does certainly add to the already rich lore of secret, ominous military bases and their supposed bizarre dealings with extraterrestrials.

On the 75th Anniversary of the Roswell Incident, 1/3rd of Americans think it Was Probably Aliens