When it comes to devouring everything within its reach, nothing in the universe compares to a black hole. However, one particular dead ‘zombie’ star could give a small or dieting black star some stiff competition in an eating contest – astronomers are currently getting a first-time look at an active-feeding dead white dwarf consuming its own solar system, including its most remote planets. News travels fast in the universe – a different group of astronomers is watching what they say is the most voracious black hole in the known universe. And if you think these cosmic consumers do nothing but gorge, yet another astronomy team has just shown that planet-eating stars can actually get indigestion. Let’s hope the cure isn’t a stellar belch!

"Life as we know it requires a rocky planet covered with a variety of elements like carbon, nitrogen, and oxygen. "The abundances of the elements we see on this white dwarf appear to require both a rocky and a volatile-rich parent body – the first example we've found among studies of hundreds of white dwarfs."

A white dwarf is basically a dead star that was once up to eight times the size of our Sun – that low mass keeps it from becoming a black hole. However, a white dwarf is more like a zombie star because they can continue consume their planets like brains even after they’ve died. In the case of white dwarf G238-44, Benjamin Zuckerman, UCLA professor and co-author of a study on it presented at the recent American Astronomical Society (AAS) press conference, sees a zombie on steroids – a white dwarf that shows evidence of eating all of its inner circle of rocky and metallic planets as a hot entrée, then making a cool dessert out of its ice outer planets, asteroids and comets. The end result is a view through the Hubble Space Telescope of what in our own solar system would be Sun going zombie and then consuming everything from Mercury to Uranus to the Kuiper Belt to perhaps even Planet Nine. (Watch a simulation here.) This first-time view of such an all-you-can-eat cosmic buffet gives NASA scientists an idea of how our Solar System might end. And the rule of astronomy is that if there’s one, there’s more … so astronomers are looking for signs of other zombie white dwarfs eating their offspring. 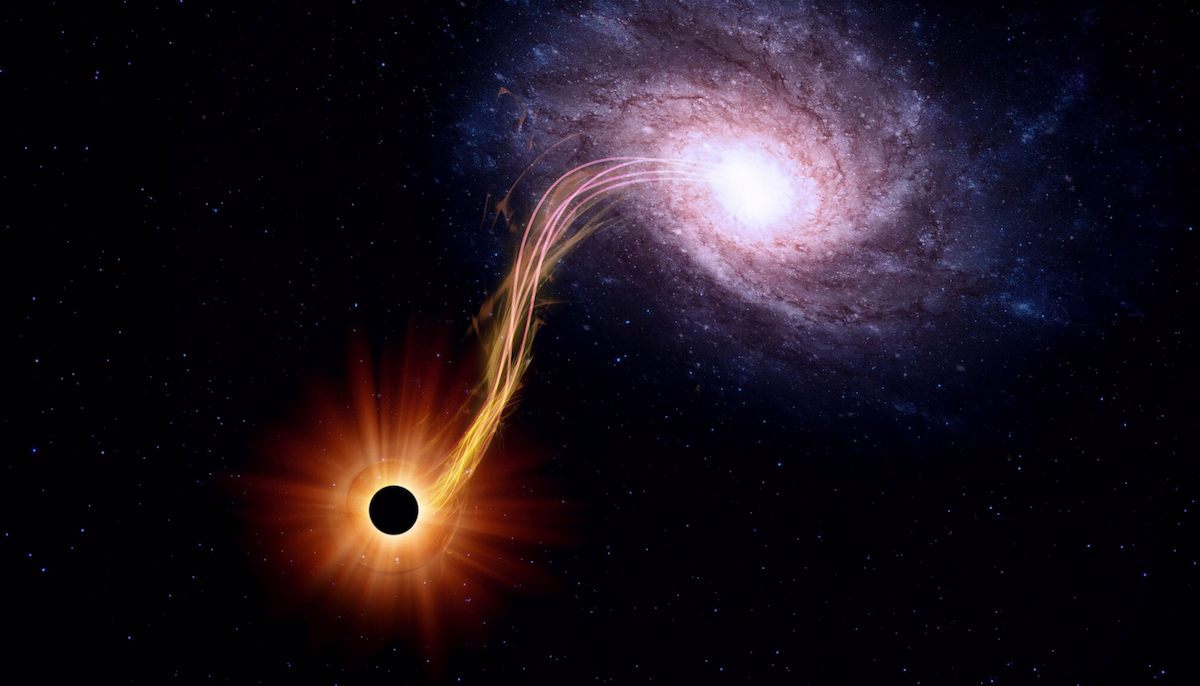 “Astronomers have been hunting for objects like this for more than 50 years. They have found thousands of fainter ones, but this astonishingly bright one had slipped through unnoticed."

Of course, most supermassive black holes would look down on this performance in comparison to their own voracious, star-consuming and sometimes even galaxy-eating appetites. Astronomers at the Australian National University (ANU) led by Dr. Christopher Onken recently announced the discovery of a record-breaking black hole in all of the eating categories and in the category of most luminosity as well. Discovered while using the SkyMapper Southern Survey (SMSS) in a search for symbiotic binary stars, this black hole has the mass of three billion suns, is 500 times bigger than the supermassive black hole at the center of our galaxy and is 7,000 times the brightness of the Milky Way, making it visible to even rudimentary backyard telescopes on a dark night. However, a space telescope is better for watching it eat – Onken estimates it consumes the equivalent of one Earth every second.

“We are fairly confident this record will not be broken. We have essentially run out of sky where objects like this could be hiding."

How did this record-breaking black hole form? Onken and his team speculate it was the result of a catastrophic event – possibly two huge galaxies colliding and providing the winning black hole with double the amount of cosmic cuisine to consume. This is one case where if there’s one, there may not be any more -- co-author Associate Professor Christian Wolf says, “I don't believe we will find another one like this.”

Has all of this talk of the gastronomy of astronomy given you indigestion? It turns out stars can also get a bellyache after eating. At that same recent meeting of the American Astronomical Society in Pasadena, California, Ricardo Yarza, a graduate student in astronomy and astrophysics at the University of California, Santa Cruz, revealed new research showing that red giant stars that eat their planets may feel their cosmic stomachs turning over and over because the planets keep on spinning inside of it.

“Think of the star as a cup of coffee and the planet as a spoon. Once you put the spoon inside the coffee and start to stir it, you’re obviously making the coffee rotate. So, once a planet enters the star, it’s kind of stirring it from the inside.”

That doesn’t sound too upsetting, does it? Yarza reminds us of what happens when you stir your coffee a bit too vigorously -- “some of the coffee is going to spill out.” That “coffee” in this case is the outer layers of the planet stripped off and cast off, like the red giant spitting up a little in its throat.  Then, like all upset stomachs left untreated to, it gets worse. In a star’s case, the spinning ‘spoon’ of a planet causes the star itself to spin faster than normal – resulting in a stellar regurgitation of a new planet or possibly even a brown dwarf star, if that’s what the red giant had consumed.

Stellar indigestion is one of those events where it there’s one, there’s probably more, and in an interview with Cosmos, Yarza explains how other astronomers can potentially find more. ‘Engulfing’ a large spinning planet or small star generates an enormous amount of energy that could increase its brightness by 10,000 times or more. Unfortunately, the length of the blast is brief in astronomical terms – possibly only a few thousand years – making them difficult to spot with today’s technology. that’s too bad because a star with indigestion sounds like perfect cable TV special. Then again, so does a record-breaking, star-eating contest massive black hole and a zombie star eating the planets it once gave birth to.

The question is – do these specials go on a science channel or a food network?