It’s a rare worker who doesn’t complain about burnout, but most people don’t often lump Catholic priests into the category of ‘workers’. However, one group of priests claim they are suffering from having too many ‘customers’ and not enough support from their boss. No, not THAT boss – the bishops in Catholic dioceses around the world who these priests say don’t give them the backing they need to do their jobs … as exorcists. 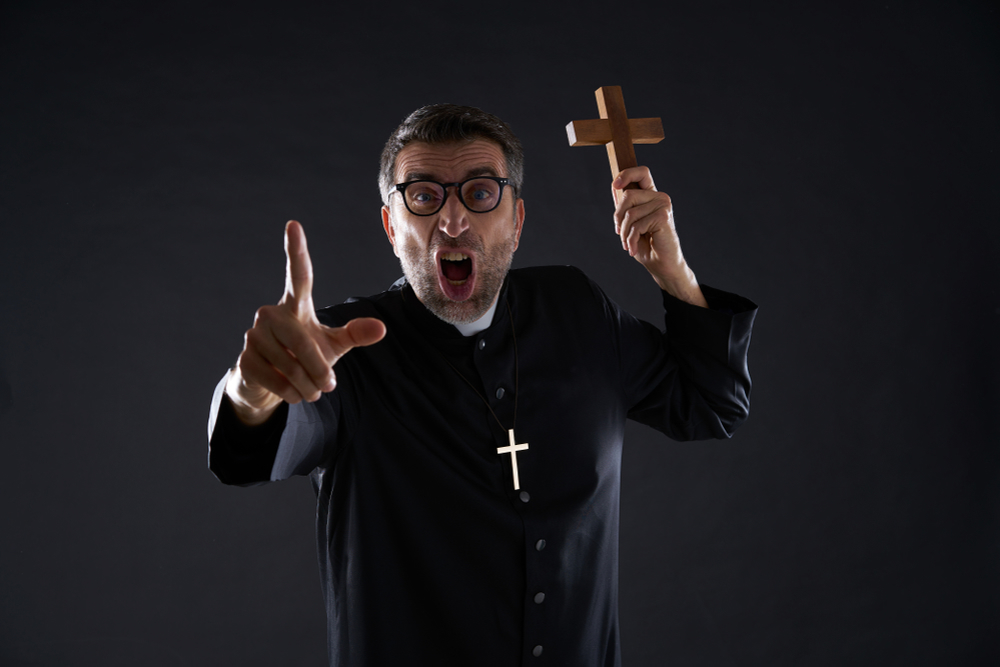 At the Regina Apostolorum's recent 16th annual exorcism course “Course on the exorcism minister and the liberation prayer” in Rome, the “first and most recognized in the world to offer attentive interdisciplinary research to those who are engaged in this field,” the major complaint heard by said researcher Giuseppe Frau from exorcists attending the training was how overworked they are. As high as that number told to Frau is, the total may be higher because most priests must first determine that the person claiming to be possessed – or claimed to be by those who brought them in – is really under the control of a demon or evil spirit. One of the many things attendees learn in the class is the warning signs of possession -- speaking in Latin, Aramaic, or Hebrew when they have no prior knowledge of the language; unusual physical strength; and vomiting. Of course, there are many other reasons for vomiting, so the priests are also trained to determine non-demonic causes of possession behavior.

“Our course is based in the Pontifical Athenaeum Regina Apostolorum of  Rome, in collaboration with the Group for Socio-religious Research and Information (GRIS) of Bologna and will address a wide range of issues: anthropological, phenomenological, social, theological, liturgical, canonical, pastoral, spiritual, medical, neuroscientific, pharmacological, symbolic, criminological, legal and juridical ones.”

That’s obviously where a big part of the workload burnout comes from – especially in times when pandemic, war and the economy are giving people their own burnouts that can cause strange behavior. According to another attendee, researcher Luis Santamaria del Rio, many times the exorcist must first deal with others have told the person.

"Many of the potentially possessed people they see in Spain have spent time with New Age, spiritual or meditation groups."

In addition, misinformation has caused many people infected with COVID-19 to think they’re possessed, or to believe that an exorcism can remove the disease better than medication and treatment can. According to interviews of attendees by The Times of London, the priests say their bishops refuse to bring in more exorcists to help with the workload. It’s worse in some areas – the survey found that Italy has 290 exorcists and Spain has 37, while the UK and Ireland together have only 28 working exorcists, and Manila in the Philippines has only one exorcism office. A little help is on the way – there were 120 attendees taking the course in May.

While it’s obvious that many of the people seeking exorcisms really need medical or mental treatment or counseling, the number of actual exorcisms has increased significantly in recent years and performing them is exhausting for the exorcist and those helping out. One of the cases discussed during the class was a nine-hour exorcism performed in December 2021 in Vincenza, Italy, at The Church of St. Mary of Mount Berico on a 28-year-old woman after she attacked a priest hearing her confession.

“She ran from one side of the penitentiary to the other and jumped on the furniture, continuing to shout blasphemous phrases in Italian and other languages at the top of her lungs. She would also have tried to attack the religious who were trying to reassure her and would have also taken it out on her mother, who would have slapped her in the face. It took four people to immobilize her.” (Google translation)”

Throw in Pope Francis speaking often about evil and exorcisms and it’s no wonder exorcists are overworked and burned out. There is no one simple solution to their dilemma – the world needs more mental health providers who can diagnose and treat the non-demonic causes of possession-like behavior, and less leaders talking about ‘evil’.

Who does an exorcist see when possessed by the demon of stress?