It all began in a dark, eerie attic in a three-story, old house at 784 Broad Street, Bridgeport, Connecticut. And it revolved around a young man - an undeniable eccentric with a fascination for the realms of monsters, the supernatural, alchemy, the paranormal, and the occult. And with a significant degree of Obsessive Compulsive Disorder, too. Without him, they may never have left the terrible marks – or, perhaps, more correctly, the ugly scars – on society they most assuredly have. He was Albert Bender. They were the Men in Black. And, in a strange - almost symbiotic - fashion, they fed on each other. The early years of Bender’s life were nothing out of the ordinary. In fact, quite the opposite was the case: born in 1921, Bender lived in Duryea, Pennsylvania, where he worked in a factory. In the aftermath of the terrible attack on Pearl Harbor, Hawaii in 1941, Bender joined the United States Army Air Corps, stationed at Fort George G. Meade, Maryland. He served from June 1942 to October 1943 – as a dental technician – and was given an honorable discharge. It was then that Bender, his mother Ellen, and his stepfather, Michael Ardolino, headed off to Bridgeport. And, that’s when things started to get weird. Very weird. Too weird. It was followed by Bender’s decision to convert the attic room in which he lived into what can accurately be termed as his “Chamber of Horrors.” 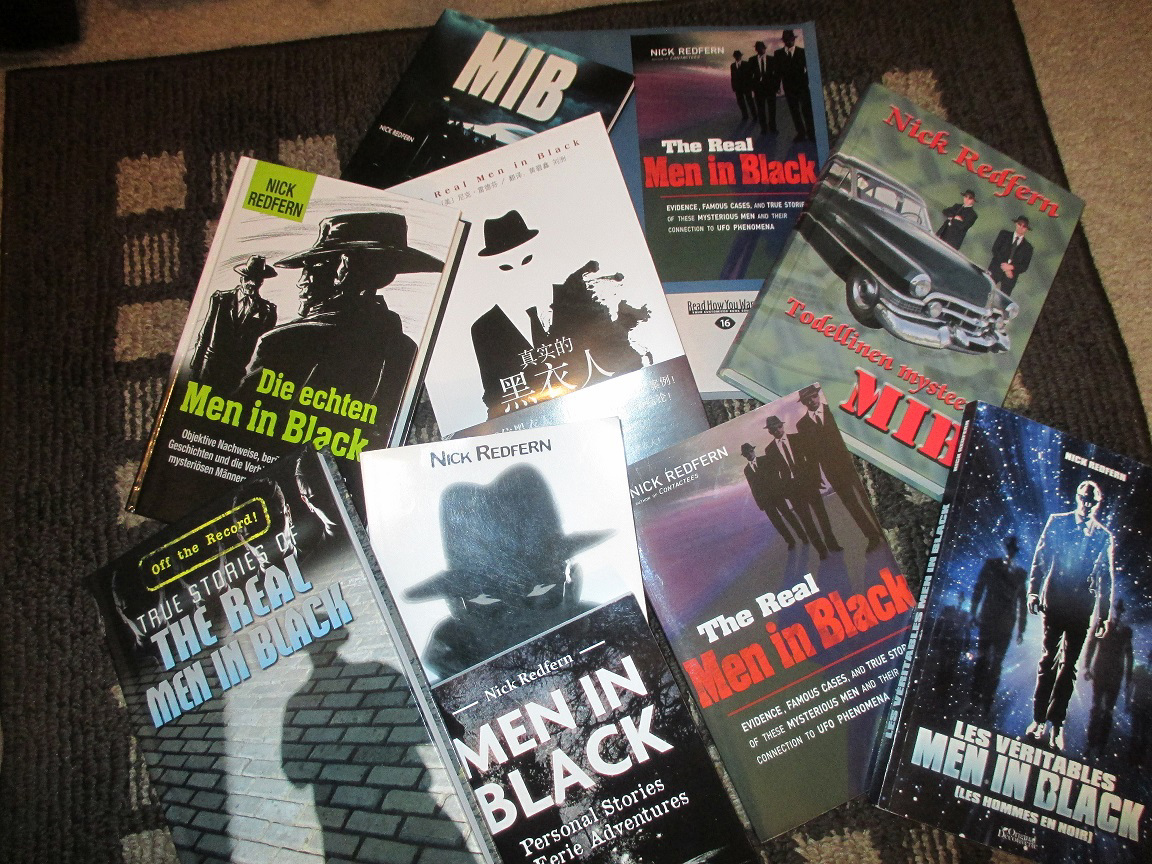 Artwork of bloodsucking bats, monsters, ghouls and skulls adorned the walls. There was barely a space for wallpaper. Imagery of vampires, the Moon, a horse’s head, and black cats could be seen. And, possibly as a worrying precedent of what was to come later: a painting of a cloaked man wearing a fedora hat and prowling around an old, tree-shrouded cemetery after sunset. Both the cloak and the hat were, of course, black in color. Bender wouldn’t have it any other way. Bender was very much a loner. Girlfriends were nowhere in sight. Certainly not a wife. Much of his spare-time was taken up watching sci-fi movies and horror flicks on Saturday nights. By Bender’s own admission, his visits to the local cinema were always made alone. As were the late-night walks back home. When the few friends Bender had called on him, he would entertain them with spooky sound-effects that boomed around the room. It was all good fun – albeit undeniably odd. And, it surely cannot have been healthy for Bender to have lived in such a claustrophobic situation. Even Bender himself had to admit that “late at night the attic became a creepy place.” No doubt!

Interestingly, Riley Crabb – the director of Borderland Sciences Research Associates and who followed the Bender affair - went on record as saying of Bender that he “…dabbled in magic, with no success in table-tipping, and surprising success with a yes-or-no technique using the Holy Bible. There was a history of psychic phenomena in his family.” There was a hell lot more than that. Pushing thirty, no girlfriend or a wife, cooped up in an attic, and a devotee of the world of sorcery, Bender surely needed something else in his life. He did. It arrived out of the blue. And it did so in a not particularly unwelcome fashion. It was the Flying Saucer sensation of the summer of 1947. For a couple of years, Bender just followed the UFO mystery – excitingly poring over the likes of Fate magazine and getting his kicks. That, however, all changed in 1952. That’s when Bender created the grandly titled International Flying Saucer Bureau (IFSB).

Life for Bender quickly changed: he found himself almost overwhelmed by the sheer numbers of people who wanted to join the IFSB – and ultimately did join. The figures grew to their hundreds. Bender, highly enthused, chose to create his very own journal, Space Review. He was having a great time, corresponding with fellow saucer-seekers – and not just in the United States, but from all across the globe, no less. In the process, Bender was developing at least some degree of a social life. Until, that is, they came: the Men in Black. That’s when, for Bender, everything began to crumble – physically and mentally.  It all started to go wrong on a certain evening in 1952. It began with Bender taking a nighttime walk to his favorite place: the cinema. Bender settled down in his seat, eager to watch the movie and hopefully get some thrills and chills of the creepy and excitement type. It wasn’t too long, however, before Bender realized he was being watched – by someone who was buried in the shadows of the theater.

This was no normal man, though. Rather, it was a strange character dressed completely in black and sporting a pair of fiery eyes. Yes, really, practically glowing. That was hardly the end of it: when a distinctly uneasy Bender left the cinema, the same M.I.B. carefully and quietly followed Bender along Bridgeport’s dark, shadowy Main Street. Bender said of this shuddering experience: “I suddenly developed a throbbing headache, and my ears seemed to block up. I felt as if something was pulled over my head to shut out everything about me. For some reason I looked up at the sky, and when I did, I saw a bluish flash. At the same time I had the sensation that my feet were being lifted off the ground.” He continued: “I had the strong impression that somebody or something was telling me to forget IFSB, to give it up. As suddenly as the feeling came it left, and my head ceased to ache.”

For meek and weak Bender, this was the kind of thing that kept him awake at night, staring at the ceiling – and not at all in a positive way. Then, things got worse. Bender started to have stomach problems. Maybe ulcerated colitis, from how he described it. Bender developed an irrational suspicion that he had cancer. Checks with a doctor showed he did not. Pummeling migraines were next on the grim list. And, if that wasn’t enough, Bender’s Chamber of Horrors was soon overwhelmed by a sickening smell of sulfur – an odor traditionally connected to demonology and the occult. In no time at all, Bender had gone from an all-time high with his UFO journal and his new friends, to an absolute, crushing low dictated by what sounded like supernatural monsters. In the summer of 1953 – July – Bender was visited by a trio of Men in Black. Depending on whose version of the story you believe, Bender was either (a) visited by three agents of the U.S. Government, maybe from the FBI; or (b) terrorized by non-human entities who manifested in his attic late night and – via telepathy - told him, in succinct terms: “Stop publishing.”

Bender, never wanting a confrontation, did exactly what he was told to do. This was definitely not what Bender was expecting: he had gone from being a then-prominent UFO researcher, to someone who now seemed to be under unrelenting psychic attack by something clearly non-human. See what I mean about monsters? The closure of the IFSB and the shutting down of Space Review, amounted to a collective blow to Bender. It amounted to a double-whammy of the very worst type. Bender’s closest friends in the UFO research field at the time – Gray Barker, Max Krengel, Augie Roberts and Dominick Lucchesi – were all puzzled and concerned about Bender, chiefly because he was deliberately keeping them in the dark about what was going on his life and in relation to the Men in Black encounters. Bender said in a somewhat guarded and careful fashion: “The mystery of the flying saucers is no longer a mystery. The source is already known but any information about this is being withheld by orders from a higher source. We would like to print the full story in Space Review but because of the nature of the information we have been advised in the negative. We advise those engaged in saucer work to be very cautious.”

In other words, for Albert it was a case of “Adios amigo.” Evidently, and wisely, Bender chose to take his very own advice. He walked away from UFOs and began corresponding with an Englishwoman named Betty Rose, who had subscribed to Bender’s journal. They actually corresponded for a number of years, finally marrying and settling down in the States and running a motel in California; but not before Betty came to visit Bender in New York – a period that totally changed his life. As Bender put it, when it was time for Betty to fly back to the U.K.: “As she walked up the stairs to enter the plane, she gave me one last wave, then moved quickly through the doorway. A strange feeling hit my stomach. I stood there still waving and could not move from the spot until I saw the plane taxi to the runway and take off. As the plane vanished in the distance I realized I had left something important undone, an unasked question which she now had no opportunity to hear from my lips.  And so it was that I found out, for the first time, that I was in love.” Marriage in 1954 to Betty, emotional stability, and a complete end to ill-health, were – thankfully - the orders of the day (Despite his worries about his health, Bender lived to the ripe old age of ninety-four, no less). The M.I.B. were gone. UFOs were finally behind Bender – for a while, as will soon become clear. And, as time progressed, Bender set up yet another project; a very different one: he established the Max Steiner Music Society. Steiner wrote the music for, among others, the original King Kong, Casablanca, and Gone with the Wind and became a great friend to Bender. The organization ran until 1981.