Skinwalkers at the Pentagon: A Review of the Book

"Skinwalkers at the Pentagon" unmasks the massive scope of the Pentagon’s landmark UFO study that ran from the Defense Intelligence Agency in Washington, D.C. The Advanced Aerospace Weapon System Applications Program, or AAWSAP investigated the “Tic Tac” and other “nuts and bolts” UFO events, analyzed intrusions of UFOs onto US military bases, as well as probed the plethora of bizarre phenomena that government investigators encountered on Skinwalker Ranch. Written by two program insiders and a respected journalist, Skinwalkers at the Pentagon comes to a conclusion that has never before been revealed! Encountering UFOs often led to the 'attachment' of strange phenomena to military personnel who visited the Ranch and brought 'something' home to their families, resulting in frightening eruptions of paranormal events in their households that terrorized and sometimes injured their children. By the end of the two-year program, more than 100 separate technical reports, some of which ran to hundreds of pages, were delivered to the Defense Intelligence Agency. Among them was a 149-page report on the Soviet (and now Russian) UAP investigation/analysis capability. Another details the design and build of a functional prototype for an autonomous Unidentified Aerial Phenomena surveillance platform." That's the description of the book from the publisher.

Before I get to my review, however, it's well worth reading the review that Whitley Strieber wrote and that can be seen at Amazon. Here it goes: "Skinwalkers at the Pentagon is the first book to authoritatively disclose the true depth of interest that the U.S. intelligence community has taken in the UFO/UAP phenomenon, and related phenomena ranging from high-strangeness events to abduction claims. Written by the creator of the Defense Intelligence Agency's Advanced Aerospace Weapons Systems program, James T. Lacatski with Colm Kelleher of Bigelow Aerospace Advanced Space Studies, and journalist and long-time broadcaster George Knapp, the book covers not only efforts to understand UAP technology, but also the efforts that have been made to recognize and understand the often dramatic and life-changing psychic effects that close encounters have on witnesses. Because of the programs and studies that it discloses, it shows that the government has taken a deep interest not only in UAPs, but in the people affected by them, and lends much-needed credibility to the accounts of these witnesses, and points to their importance. This is a first, and makes Skinwalkers at the Pentagon among the most important books on the subject ever published, quite possibly the most important." 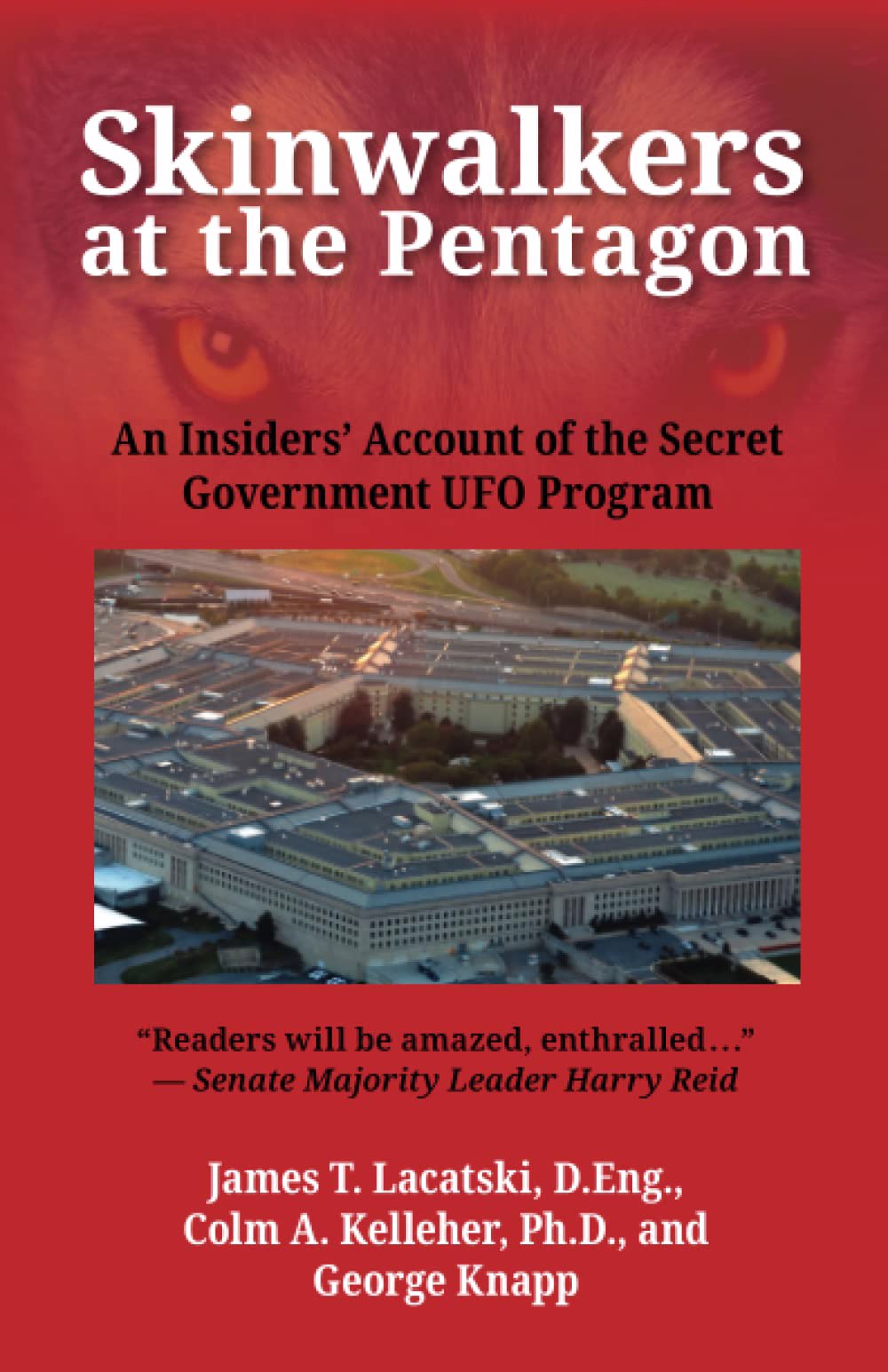 As for my own review of Skinwalkers at the Pentagon, in concise fashion I would say something like: "menacing and sinister." And, that is meant as a very good way to describe the book. Of course, I can't just leave the review there! But, you know what I mean. First of all, this is not your average UFO-themed book. That's for sure. It goes far beyond that. In the pages of the book, you'll see there is as much about the world of the paranormal as there is about the UFO phenomenon. And, you will see how and why  the story blends together. In the same way that, in 1987, Whitley Strieber turned the "alien abduction" debate on its head with Communion, Skinwalkers at the Pentagon does the very same thing now for the overall UFO phenomenon. The book makes it abundantly clear that the UFO puzzle is not just about "space men" from other worlds visiting our planet in good old "Flying Saucers." Rather, the book shows how the UFO phenomenon can be outright dangerous. In other words, Project Blue Book this ain't! As a quick, brief aside, I began to realize there was a link between the paranormal and UFOs in the early 1990s. And, I never went back. Hence the reason why I wrote my 2010 book, Final Events, that blends UFOs, the U.S. government and demonology. Skinwalkers at the Pentagon, though, gives us a unique look at what was going on - for years, no less - in government agencies and how those same agencies were forced to accept that the paranormal part of Ufology could not be dismissed. And shouldn't be. In the process, key elements of the U.S. Government found themselves in states of trauma and paranoia. They were forced to go head to head with monsters, too. And, no, I'm not stretching that.

With a foreword from the late Senator Harry Reid, the scene is set. And, what a scene it is. We have the likes of the Defense Intelligence Agency, the Department of Homeland Security, and other government agencies. Thankfully, we get a good, and concise, explanation of all the various agencies, names, and groups that got into the UFO phenomenon: AAWSAP, BAASS and so on. We also see how - both clearly and graphically - many people in the projects  wondered what on Earth they had gotten themselves into. Imagine leaving your office at the Pentagon and, with absolute horror, realizing that supernatural creatures have followed you all the way home. And, that they now have their claws in you, so to speak. How about encountering shadowy, terrifying non-human entities in the dead of the night? And in your bedroom? Moving on, there were people falling sick on the projects. And, perhaps the most disturbing and creepy matter of all: encounters with creatures that could almost pass for nothing less than werewolves. And, no, I'm not exaggerating. It's no wonder those on the U.S. government programs wondered how to handle all of this. In fact, sometimes they didn't handle it. Or, were not able to. Hence the matter of the bizarre illnesses I mentioned.

So, what does all of this tell us? Well, I'll tell you. First and foremost, we have to thank those who have come forward on their experiences while working on the UFO projects. But, as I see it, the most important thing about Skinwalkers at the Pentagon is that it has skilfully demonstrated to us how the UFO mystery is not all that it seems to be. Rather, it's much more. The book makes that very clear - graphically, I would say. Aspects of the occult come into the story. Portions of the story are like a horror movie. But, they are absolute fact. In light of what has gone down so far, we might very well ask: is the UFO phenomenon really extraterrestrial in nature? Is the whole thing paranormal? Are these entities among us terrestrial, rather than extraterrestrial? Could they be multi-dimensional creatures? The questions in front of us are many. As for the answers? Well, as Skinwalkers at the Pentagon shows, there's still far more to be understood and found. And, finally, if you're a devotee of the old-time UFO researchers - Stan Friedman, Donald Keyhoe and so on - you might want to be prepared to have your belief systems not just shaken, but put through a hurricane. Too bad.Ufology is changing. And it may not all be good news.

Note from Nick: Many thanks to George Knapp for a review copy and cover of Skinwalkers at the Pentagon.