In this age of exploration a lot of attention has been paid to what lies out beyond our planet and what swims about in the darkest depths of our unexplored seas, but an area that seems to get significantly less attention is the world that lies locked down in the never-ending black night below us. Here caves and caverns stretch out and meander over vast distances, sometimes harboring new discoveries beyond our wildest dreams. Yet the most bizarre and baffling supposed accounts of the deep places of the earth are those concerning strange, unknown civilizations long gone, who are claimed to have dwelled within the earth and that remain lost and unconfirmed.

One of the most seemingly absurd claims of such an underground civilization was detailed in a 1956 bestselling book called The Third Eye, which is an allegedly autobiographical account by a man named Tuesday Lobsang Rampa, outlining his experiences at Chakpori Lamasery, in Tibet. Among the wealth of strangeness in the book, such as Rampa’s operation to drill a hole in his head to release mysterious mental powers, the titular Third Eye, and the strange discovery of his own mummified body from a previous incarnation, there is his curious account of finding a vast subterranean world crafted by inscrutable entities under the Tibetan capital, Lhasa. Here beneath the palace of the Dali Llama, he joined a priest to explore a system of caves whose walls were adorned with strange symbols and drawings by unknown hands. Following one tunnel down into the darkness, Rampa claimed to have come across a vast cavern with an underground lake and a ceiling so high he could not discern its height as the light did not reach all the way up the soaring chasm above. 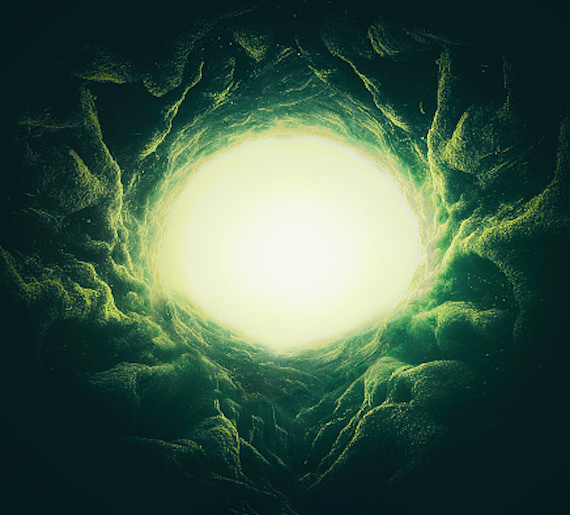 Here the walls held mysterious geometric diagrams and diagrams, as well as pictures of giants and machines the likes of which he had never imagined, along with inscrutable writing in some puzzling alien language. They then took a side passageway that wound off and purportedly came to an area with a “black house,” within which were ensconced three sarcophagi apparently made of a smooth black stone similar to obsidian and which were covered with an array of strange symbols and what looked to be a star map of some kind. Within these were the bodies of strange giant beings, which the priest who had accompanied him explained as being the bodies of ancient “gods,” who had come to their world eons before. Rampa would say of these bodies:

I looked again, fascinated and awed. Three gold figures, nude, lay before us. Two male and one female. Every line, every mark faithfully reproduced by the gold. But the size! The female was quite ten feet long as she lay, and the larger of the two males was not under fifteen feet. Their heads were large and somewhat conical at the top. The jaws were narrow, with a small, thin-lipped mouth. The nose was long and thin, while the eyes were straight and deeply recessed. No dead figures, these-they looked asleep.

Things got perhaps even more bizarre yet as they continued their journey through the complex spider web of dank caverns, tunnels, and passageways. Within the oppressive gloom here below the earth Rampa claimed that they came across fantastical creatures the likes of which he had never seen skittering about, as well as a brightly lit room hidden behind a sliding wall panel, which held an array of strange dormant machines with inscrutable purposes he could not fathom. When this tour was finished, Rampa claimed that he had then gained the new ability to look through time, and that he saw visions of the ancient ages when these enigmatic giants he has seen had ruled the earth. As incredible as all of this talk of an ancient race of subterranean giants sounds, it is impossible to verify any of this, no evidence has ever been brought forward other than this account, and there has actually been much debate as to Rampa’s true identity or whether this was all a hoax. We may never know. 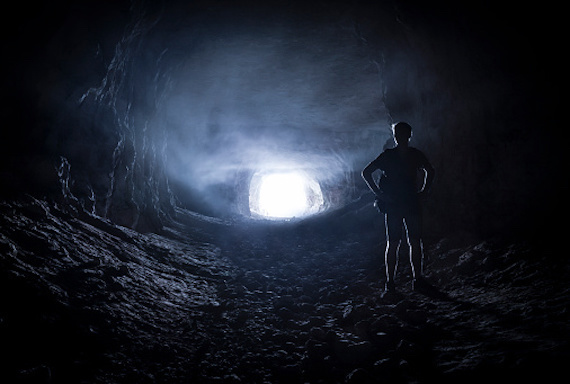 Tales of ancient races of enormous stature inhabiting the deep dark places of our world are actually rather numerous, and another tale of subterranean giants comes from the state of Missouri, in the United States. In 1885, the New York Times ran a truly astounding story of an ancient underground city that had been found at a depth of 360 feet during the digging of a shaft for a coal mine near Moberly in Randolph County, Missouri. Two men, a David Coates and Mr. George Keating, then delved down into the depths of the shaft to explore what had been discovered down below, and they would later claim that they had come across an immense underground city which was described as follows:

A hard and thick stratum of lava arches in the buried city, the streets of which are regularly laid out and enclosed by walls of stone, which is cut and dressed in a fairly good, although rude style of masonry. A hall 30 by 100 feet was discovered with stone benches and tools of all descriptions for mechanical service. Further search disclosed statues and images made of a composition closely resembling bronze, lacking luster. A stone fountain was found, situated in a wide court or street, and from it a stream of perfectly pure water was flowing, which was found to be strongly impregnated with lime.

This is already a fairly bizarre thing to find underground in Missouri, but within the nearly impenetrable murk of these corridors the two men claimed to have found the actual remains of the city’s denizens, which had apparently been there in the dark undisturbed for millennia, and were described as being true giants far larger than a normal human being. The bizarre remains were described:

The bones of the leg measured, the femur four and one-half feet, the tibia four feet and three inches, showing that when alive the figure was three times the size of an ordinary man, and possessed of a wonderful muscular power and quickness. The head bones had separated in two places, the sagittal and the coronal suturis having been destroyed. The implements found embrace bronze and flint knives, stone and granite hammers, metallic saws of rude workmanship, but proved metal, and others of similar character, they are no so highly polished, nor so accurately made as those now finished by our best mechanics, but they show skill and an evidence of an advanced civilization that are positively wonderful.

Frustratingly, the article mentions that a follow-up excursion would be launched, but then there is no other word on the alleged discovery. Unbelievably, this ancient underground city of giants in North America was just sort of forgotten in the mists of time. Why should this be? Of course there is the very real possibility that this was a fictionalized fake news story, which were unfortunately rather common in the day, but there have been rumors that the phenomenal discovery was covered-up, perhaps by the Smithsonian. This would be yet another conspiracy painting the Smithsonian as a shadowy organization bent on obfuscating and burying bizarre archeological finds, and if so what happened to those gargantuan bones? No one knows, it was never mentioned again, and the lost underground city of Missouri remains just another weird historical oddity. 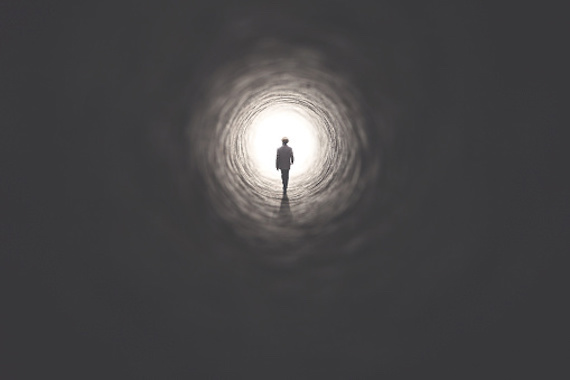 The idea of such underground giants can be perhaps best be linked to the Hollow Earth Theory, which more or less states that within our planet rather than layers of rock, crusts, and magma is a lush world full of life and even with its own miniature sun, all of which sits deep within the hollow crust that we walk upon. The idea can trace its roots back to the 17th century, when Edmund Halley proposed in 1692 that the earth consisted of a series of spherical shells that all orbited one another around a hollow core, an idea which he concocted in an effort to explain various mysterious discrepancies in compass readings. Within each of these shells, he theorized, could be areas that were capable of harboring life and even civilization.

The idea caught on, and underwent a sort of evolution, undergoing various additions and iterations until it was no longer a series of layered shells, but simply one vast world lying within a hollow space below us. Indeed, in those days the theory gained such popularity that it was accepted as fact by many, and was even believed by those within the scientific community of the time. The idea that there were two major entrances to this underground realm, located at the North and South Poles, was pursued by some expeditions, the most famous being that of a John Cleves Symmes, Jr. in 1822, who remained a vocal, outspoken proponent of the concept and was thoroughly convinced of the theory's validity up to his death. Although eventually the concept of a Hollow Earth fell out of favor, it has nevertheless been held onto by stubborn believers all the way up to the present day, and there are a surprising number of books and websites devoted to trying to gain credence for it.

Although there are many offshoots of the basic core theory of a hollow Earth, an interesting common detail of many of these ideas is that the animals and people who dwell there are larger than those who inhabit the earth above. The giant people of these civilizations are often described as being the ancestors of ancient peoples, and as being highly advanced, with the technology to tunnel up through the ground where their dwellings and evidence of their existence can be detected by us. According to Hollow Earth “truthers,” these stories of ancient subterranean civilizations and giants can be seen as evidence of their far-out ideology. What is going on in these cases? Are they just tall tales, a slow news day, or something else altogether? We may never know for sure.

Head of Hercules Found on the 2,000-Year-Old Antikythera Mechanism Shipwreck