The Holy Family in Zeitoun

Zeitoun is one of the locations where the Holy Family supposedly stopped on their flight to Egypt, fleeing King Herod's murder of the innocents some nineteen centuries earlier. From April 2, 1968 to May 29, 1971, the Virgin Mary appeared weekly on average, especially around feast days, on top of St. Mary's Coptic Church in Zeitoun for all to see. This was not something just witnessed in a mystical vision by a few; it was a supernatural experience perceived by massive crowds for years. In addition, this occurred in a predominantly Muslim country and at a Coptic Church, which might be why Catholics are less familiar with it.

The Blessed Virgin Mary was witnessed by hundreds of thousands of people, including Copts, Catholics, Protestants, Muslims, and even secular Marxists, like the former Egyptian President Abdel Nasser. This supposedly greatly influenced him in his relations with Christians, who at the time were being targeted: red crosses painted on their houses to mark them. This was also a time of rapid expansion of Islamic fundamentalism.

Perhaps, Mary had come to mollify these tensions against Copts and other Christians in this very vulnerable time. Egypt had recently been defeated by Israel ten months earlier in the June 1967 Six-Day War. The Zeitoun years were a turning point from the '67 war to the Camp David Accords, and finally, a peace treaty with Israel in 1979, on the one hand, and rise of Islamism and the Muslim Brotherhood on the other.

Large, luminous doves moved swiftly across the sky, and at times flying in formations of two, seven or twelve, and in the shape of a cross. Incense as from 'millions of censors' billowed up around her with a sweet fragrance. There were mysterious flashing lights, a canopy of shooting stars, like 'a shower of diamonds made of light,' as one witness recalled. Many miraculous healings occurred too, from blindness, polio, paralysis, cripples, cancer and terminal illness. There were also spiritual conversions of Muslims and others to Christianity.

The Vatican made no official statement on its authenticity, deferring to the Coptic Orthodox Church. The Coptic Church investigated the matter and determined it was an authentic and true phenomenon. The civil government as well concluded that something real was happening at Zeitoun. At one point, the authorities even investigated a fifteen-mile radius for electronic devices and cut all power off to the area to create a blackout, yet Mary continued to appear.

The story begins much earlier, however, around 1920, when a Coptic Christian, Tawfik Khalil Abraham, who owned this spot of land in Zeitoun, was about to build a hotel there. Then, the Blessed Virgin Mary visited him in a dream requesting instead that he build a Coptic Church in her honor. If he did so, she promised to perform a miracle there sometime in the future.

In 1925, the Coptic Orthodox Church of St. Mary was completed. Then, as promised, the miracle happened years later beginning on April 2, 1968. Two Muslim garage attendants noticed a woman on the top of the Church and thought she was about to commit suicide. One of the attendants, Farouk Mohammed Atwa, yelled up to her 'Lady, don't jump!' Soon, a crowd had gathered and realized that this was no ordinary woman but the Blessed Virgin Mary herself.

The apparitions continued unabated, with Mary appearing for a few nights each week for the next three years. People from all around began to come to St. Mary's in Zeitoun to see the miraculous apparitions. The crowds grew larger and larger. By some accounts, 250,000 at the highpoint would come nightly to watch for Mary appearing from Heaven. 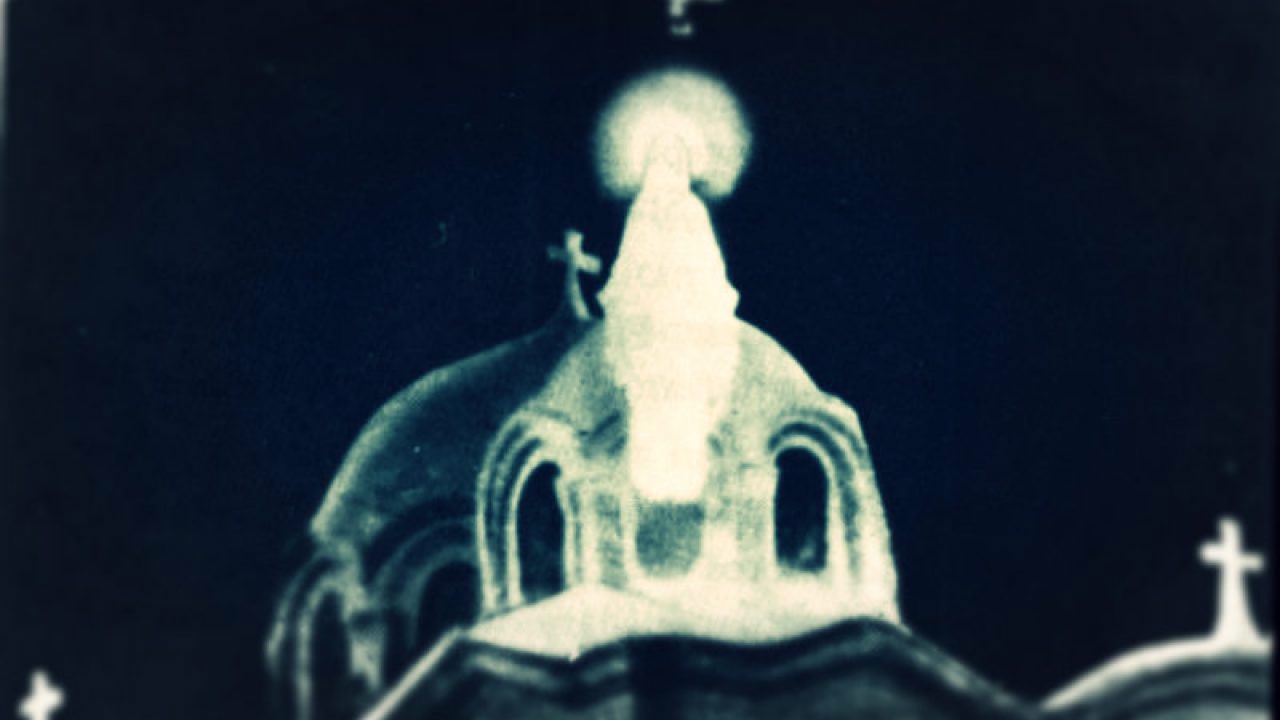 Despite the length of the apparitions and the number of witnesses, the Blessed Virgin Mary did not speak or deliver any verbal messages. She maintained an attitude of prayer bowing towards the cross and blessing the people. Mary was seen gliding slowly about the domes of the Church, sometimes standing for two to three hours in the same spot, and at times kneeling before the cross on the roof. She acknowledged the people's presence by smiling at the crowd and blessing them with her hands.

Mary had long white and blue robes, and a veil of bluish-white light. They could see her garments moving in the warm night breeze. She had a dazzling crown on her head with a halo of bright light. Sometimes the witnesses saw her with the infant Jesus, or sometimes with the twelve-year old Jesus, and other times, with St. Joseph. Still other times, she was seen carrying a cross, or an olive branch-a symbol typically for peace and unity.

'There she was, five or six meters above the dome, high in the sky, full figure, like a phosphorous statue, but not so stiff as a statue. There was movement of the body and of the clothing . . . she was very quiet, full of glory.'

One Coptic priest noted that, 'there were rays [of light] coming down from her hands,' like depicted in the miraculous medal.

Coptic Bishop Marcos said when Mary looked at the crowd, it seemed as though 'she concentrated her eyes on them exactly.' Despite the number of people, it felt personal and individual. One witness, American Pearl Zaki, described being there, 'Yet I think each person present, as I talked with them and understood, felt alone with her and drawn completely to her.'

A certain Coptic Christian, Dr. Khairy Malek, who witnessed the apparitions, said he could even see her teeth when she smiled at them. At one point, the crowd turned and began shouting up towards the moon. When Dr. Malek turned, he saw the Virgin Mary's 'whole face stamped on face of the moon.' Clearly, something extraordinary and profound occured in Zeitoun between 1968 to 1971. The next question is why then, and why there? 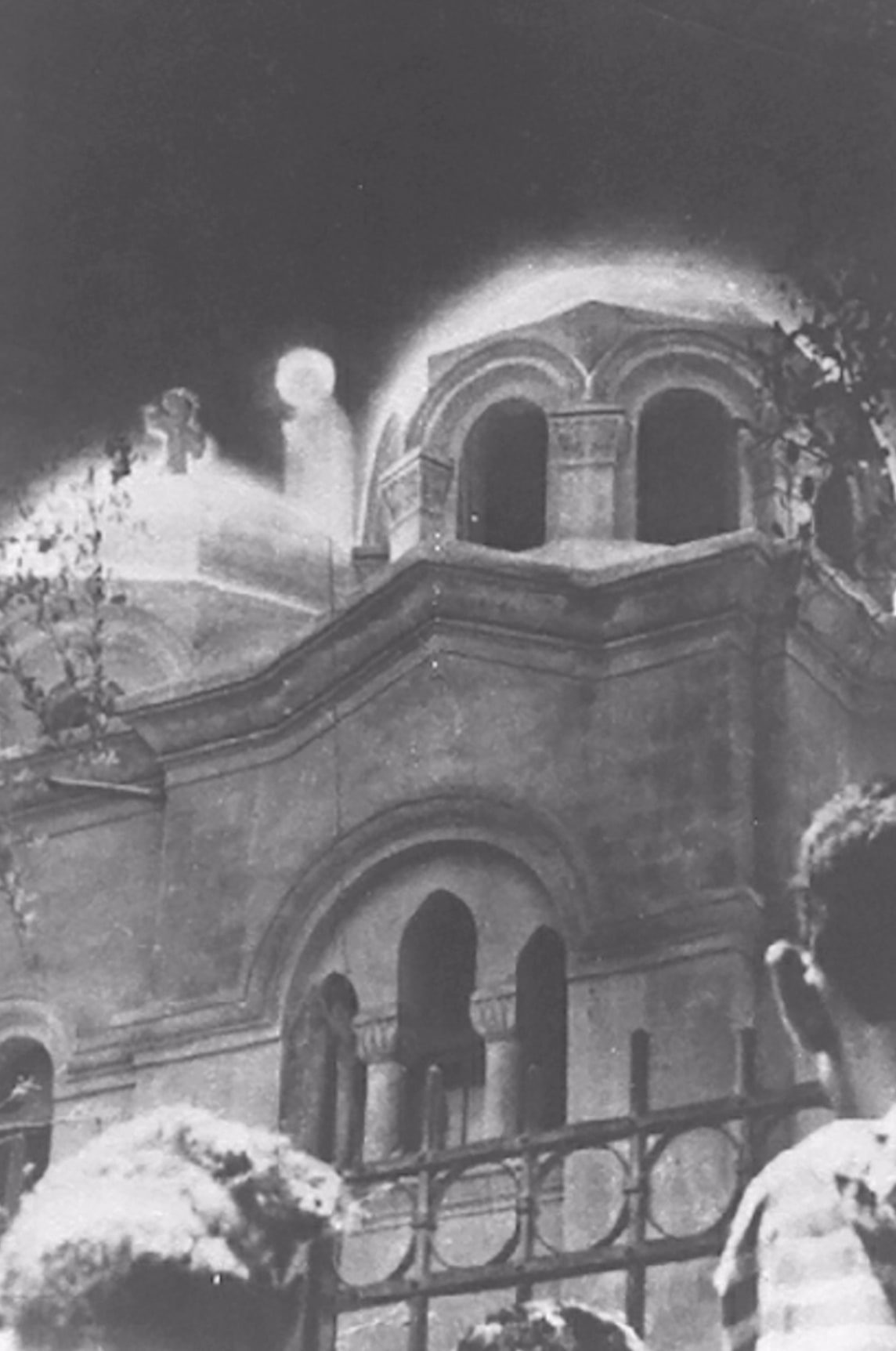 As mentioned, Zeitoun, Cairo was one of the traditional locations that the Holy Family had fled to escape the slaughter of the innocents under King Herod, as Gospel explains:

'Now when they had departed, behold, an angel of the Lord appeared to Joseph in a dream and said, 'Rise, take the child and his mother, and flee to Egypt, and remain there till I tell you; for Herod is about to search for the child, to destroy him.' (Matt. 2:13)

Nevertheless, Herod carried out his murderous intent against the infants (Matt. 2:16). Perhaps, the Blessed Virgin Mary appearing at Zeitoun was to honor the Holy Family's flight to Egypt from Herod's massacre of the innocent children.

Blogger and author Emmet O'Regan has pointed out that 1968-1971 was the very same timeframe for the mass legalization of abortion. In April 1968, the very same month that Zeitoun began, the United Kingdom enacted the Abortion Act. This was the initial break in the dam inundating the world with legalized abortion. This quickly spread to the United States in loosening abortion laws in 1969, and soon thereafter, Roe v. Wade was argued in 1971, and decided on January 22, 1973. This opened the doors to the mass slaughter of the innocents worldwide. It is the beginning of Herod's slaughter of the innocents on an apocalyptic level.

Zeitioun is very much like Blessed Virgin Mary's dramatic and unprecedented warning at Fatima in 1917, just before the unleashing of the errors of Communism upon the world in the Russian Revolution. Yet, at Zeitoun there were no messages, no visions, and no secrets. Mary's message was her silent presence in that time and at that location. The Blessed Virgin Mary came, again, in unprecedented fashion in Zeitoun, perhaps, to warn the world of new evils that were about to be unleashed upon it - this time with abortion. Perhaps, it was an appeal, too, against the rise of Islamic fundamentalism in Egypt.

Our Lady of Zeitoun, Pray for Us!

Maybe not coincidentally, apparitions of the Blessed Virgin Mary were seen there in 2000-2001, and again, in 2006, in Assiut - which is also traditionally the southernmost point that the Holy Family travelled to in their Egyptian flight. Another purported apparition, then, occurred in Warraq, Egypt in 2009, among other locations.

Was the Blessed Virgin Mary retracing the steps of the Holy Family's flight into Egypt some two millennia later? In these unprecedented revelations, the Blessed Virgin Mary came to Zeitoun as Our Lady of Light, that is, the Woman clothed with the Sun with a crown on her head, much like the great portent that appears in Heaven (Rev. 12:1).

He who has ears to hear, let him hear.

This article was originally published on Catholic Exchange on June 27, 2020 and has been reproduced here with the express permission of the publication. 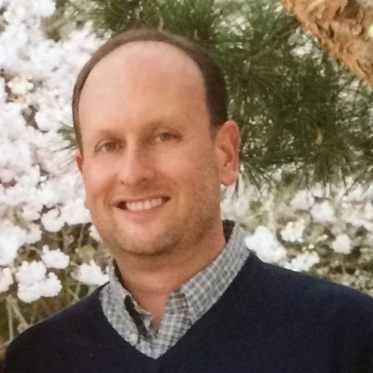 Brian Kranick's latest book is Burning Bush, Burning Hearts—Exodus as a Paradigm of the Gospel. Brian is a freelance writer focusing on all things Catholic. He has a master's degree in Systematic Theology from Christendom College. He has spent years working as an analyst in the Intelligence Community, and currently resides with his wife and three children in the Pacific Northwest. He is the author of the blog: sacramentallife.com.

The Strange Case of the Tuck Family Fire Poltergeist