The Strange Case of the Tuck Family Fire Poltergeist

One common fixture of the world of hauntings and the paranormal is that of the poltergeist. Many people know of this type of haunting from the 1982 movie of the same name, Poltergeist, directed by Tobe Hooper, but what many people might not realize is just what this phenomenon is really all about. The term “poltergeist” comes from a fusion of the German words poltern, meaning “to rumble,” and geist, which means “ghost” or “spirit,” making the word translate basically to more or less “noisy ghost.” The strange phenomenon usually descends quite suddenly, often in places where there was previously no known paranormal activity, usually ending just as abruptly, and it can be quite frightening for the victims indeed. This poltergeist activity usually entails a wide range of seemingly mischievous occurrences, including anomalous noises such as knocks, thuds, and footsteps, or more rarely voices, objects moving on their own or getting knocked over by unseen forces, doors opening and closing by themselves, lights or other electronics turning on or off or experiencing strange power surges, levitating objects, objects that are mysteriously misplaced or seem to teleport from one place to another, even dropping from the ceiling out of nowhere, strange scents that seem to spring up out of nowhere, on rare occasions apparitions, and numerous other unexplained disturbances. Some of the most terrifying of such accounts involve fire, with the phenomenon causing blazes to appear from nowhere, and one of the most frightening of these allegedly befell an otherwise nondescript family in the U.S. state of Alabama.

A notorious case of this revolves around a Calvin Tuck, his wife Willie Bell, and their six young children, who all lived a normal, mundane life in a four-room log tenant house near Talladega, Alabama. In August of 1958, the poverty-stricken, African American family was suddenly plagued by small fires which seemed to erupt all over the house for no discernible reason, and which seemed to target some unusual items, such as one instance in which a loaf of bread in the kitchen exploded into flame or specific items of clothing. The flames themselves were in this case notable in that witnesses claimed that they were a reddish blue color and left the smell of sulfur permeating the air. 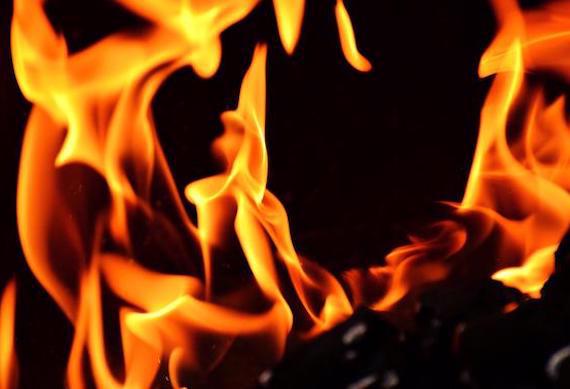 The rate of fires was intense, with at least 52 blazes spontaneously breaking out over a short amount of time. At one point, a contractor who came to inspect the house claimed that one fire broke out every 15 minutes while he had been on the property, often right in front of his eyes. Authorities were at a loss for what could be behind these insidious fires. In each case the oddly colored fires were found to have started at the ceiling, with none of them starting from the floor except for one case when a bed burst into flame. Adding to the mystery was the fact that the humble house had a metal roof and had no electricity, ruling out the idea that faulty wiring could be the cause. The Fire Department had no idea as to what was causing so many fires in such rapid succession, and locals began to gather outside the house at all hours with buckets of water in an attempt to help out.

The mysterious fires continued unabated until they culminated with one day in which an intense series of 22 relentless fires gutted the home, ruined furniture, and put the family’s lives in severe danger. Terrified and with no insurance, the distraught family was forced to vacate their devastated home and move into a similar structure not far away, hoping that the fires would cease now that their old house was gone. They were wrong. Almost immediately upon moving into their new abode, four fires allegedly started around the house in quick succession, prompting a very disturbed Tuck to pile his family’s belongings in the yard and set them on fire, in a moment of seeming temporary insanity, possibly thinking that the fires, which he increasingly believed to be supernatural in nature, would stop if there was nothing left to burn. Once again, the family fled for a new home, and the second house is said to have burned to the ground as soon as they left it behind.

This time the family found themselves at the home of Tuck’s brother-in-law, a Darnell Suttle. Whatever had been terrorizing the family seemed to have followed them to this third residence, as five new fires quickly sprung up at the Suttle home as well. Two police officers who went to investigate were surprised to see a quilt hanging on a tree in the yard suddenly engulf itself in flames right before their eyes, after which it put itself out to hang there charred and surrounded with wisps of smoke. One of the officers, a Lieutenant Ben Cooley, claimed that he had tried to light the unburned part of the quilt out of curiosity and found that it would not burn no matter what he did, prompting the astonished policeman to marvel, “I saw it, but I wouldn’t have believed it myself if I hadn’t seen it.” Although Tuck himself wasn’t home at the time, the terrified and visibly upset wife told the officers that several articles of clothing and some newspapers around the house had spontaneously burned up not long before they had arrived. The intrigued officers found evidence of charred items throughout the house, as well as numerous buckets of water that had been left in every room in the event that one of the mysterious blazes decided to break out. Indeed, right after the police officers left yet another fire spread through some curtains in the living room. 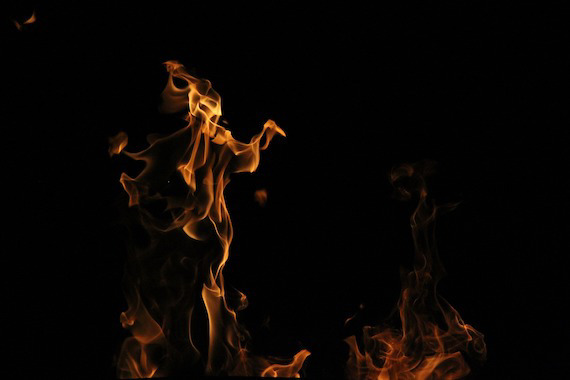 The Tucks were eventually told to leave when Suttle decided he’d had enough of all of the fires. The destitute, harried family then moved to yet another home, this time moving in with Tuck’s own father. Running out of ideas on what to do about the plague of fires that seemingly stalked his family, a desperate Tuck went to a Voodoo witch doctor, who told him that a “fire curse” had been placed on them. The witch doctor suggested a special mix of herbs the family was to chew on for three days, as well as some medicine that was to be placed in a bottle and buried upside down in the yard of the afflicted home, which he was certain would break the hex. Thinking that he had nothing to lose, Tuck purchased the cure and followed the instructions to a tee.

It would prove to be ineffective to say the least. Within that very same week, at least seven more fires would bloom at the residence, with one of the fires witnessed by firefighters on the scene, when it flared up around some of the children’s jackets. Again, no one had any idea of what the cause of the fires could be. It was not until authorities interviewing the family for their investigation that they found a clue in the form of a strange greenish residue that was left behind after a rag on a table burst into fire as the bewildered Fire Chief himself sat there. It was this strange substance that led him to believe that an arsonist might be somehow behind the blazes. However, there was no concrete evidence of this and meanwhile the fires continued, forcing the family to move yet again, this time to the house of a friend who lived 20 miles away.

Once again, the fires continued as frustrated authorities became more and more convinced that an arsonist must be responsible, despite the fact that no one had a clue as to who it could be or how they did it. Additionally, careful examination of the homes that had been targeted found no evidence of flammable substances such as gasoline, and no trace of arson activity, yet officials insisted it had to be caused by someone, refusing to believe that fires could possibly start by themselves despite extensive eyewitness testimony to that effect, including that of police officers and firemen, who claimed to have seen the fires clearly start for no reason when no one was there to start them. Nevertheless, the Fire Chief and State Fire Marshall, among others, suspected that some flammable chemical was being used. 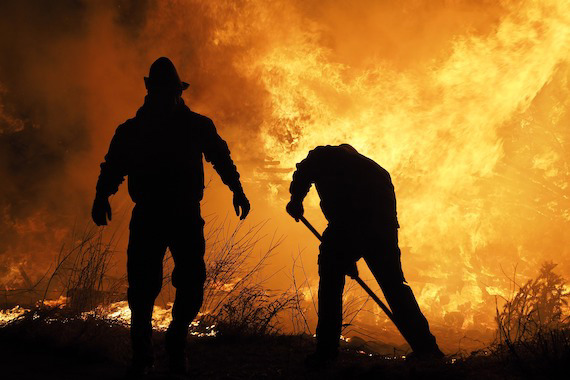 Even after careful chemical analysis was done on the residue and the items of the homes, the only thing they could turn up was trace amounts of phosphorous in the wallpaper, but it could not be determined if this was naturally occurring or not. Phosphorous is also an extremely volatile, dangerous substance that is hard to store, and very difficult to control or use for anyone but a very knowledgeable person who doesn’t mind the risks associated with it. The unstable substance is also not easy to get, especially in the amount that was needed to cause so many fires. In the end, it was deemed that it would simply be too impractical and dangerous for someone to get a hold of that much phosphorous and then haul it around to so many homes, apply it, and then get it to ignite when they wanted it to, all without getting caught.

Perplexed, authorities nevertheless believed that someone had to be responsible, and the hunt for the culprit continued. Then, after so much investigation and authorities being stumped for months, the Tuck’s 9-year-old son Calvin Tuck, Jr. came forward and admitted to being the one who had started the fires, claiming he did it with matches or with rags that he would get to smolder before igniting in order to scare his family into move back to their hometown of Birmingham. Police jumped on this confession and started proclaiming that the mystery had been solved.

While the police considered this to be the end of the case, the public, the media, and even some local officials were not convinced. After all, how could a young boy meticulously and expertly start so many fires, usually when the boy was not present, and which usually started from the ceiling or walls, with many seen to spark up in right in front of startled witnesses, while all the while confounding the Fire Department, toxicology experts, and other authorities? It all seemed rather implausible, to the point that not even the Fire Marshall really believed that the confession had any weight, and considered the case mysterious and very much open. There have been many who have pointed to the fact that this all occurred to a black family in 1950s Alabama, and that the confession was obviously coerced, if it ever happened at all. For many, this mysterious case is not as closed as authorities of the time would like to have us think, and it seems we may never get any real, concrete answers to it all. For now it remains one of the most terrifying and intense poltergeist hauntings of all time.

A Large, Mysterious Ape That Isn't Bigfoot or the Yeti