One of the strangest things of all about being a researcher and writer on the world of the supernatural, is when the investigator – in this particular case, me – becomes a part of the story itself. For the most part I’m a writer, investigator, researcher and lecturer on paranormal phenomena. And a regular, road-tripping enthusiast. Occasionally, though, I find myself becoming the witness. Or, the victim, we might say. Describe it as you see fit. As I see it, both are perfectly applicable to the strange events. There was, perhaps, no better example of this than a very strange affair that went down on the late afternoon of October 8, 2018. First, though, I have to share with you what happened the night before. The afternoon was a normal one: I was working on one of my books, hoping to get a couple of thousand words completed. It didn’t happen, though. Actually, there was a very good reason for that: it was around 3:00 P.M. and I got a call from a man named Jeff Owen – he had been referred to me by a mutual friend and colleague in the field of Cryptozoology. Jeff was from Austin, Texas and he was someone who wanted some advice – help, even – concerning something he had experienced only four nights earlier.

Jeff’s job takes him on long trips and the one he made on the 4th was no different. He was heading down to Edinburg, Texas – where, coincidentally, I speak regular at the yearly, UFO-themed Out of This World gig. Jeff was around twenty-miles outside of the city when he was shocked by the sudden sight of what he could only call a “real, living pterodactyl.” He described the monstrous creature as having a long beak, bat-like wings that extended to around twenty-feet (maybe more), and blazing red eyes. Self-illuminating, red eyes, no less. The massive creature was only in view for a few moments, but it was long enough for Jeff to see “a flying dinosaur," as he described it. Jeff said the gigantic beast was gone in seconds, but even that was plenty of time for him to make out the monster he’d seen. Jeff told no-one, aside from a fellow figure in Cryptozoology, who he found after searching around the Net. The story was then passed on to me, something that occurred the day before things went very weird. The night before my experience, something very strange happened: Jeff was woken in the early hours by his phone calling. It was around 2:15 A.M., and he jumped out of bed, worried that it was someone with bad news. It wasn’t, thankfully. It was nothing less than squeaking, static-like noises that pierced his eardrums – a classic phenomenon that often occurs in M.I.B./W.I.B. cases, as we’ve seen. Suddenly, the line briefly went dead. Maybe around twenty minutes later, the same thing happened again.

After checking it wasn’t his parents, or his sister, trying to call, Jeff turned off his cell. Weirder still, when Jeff got back to sleep, he had a very vivid dream of a beautiful woman standing at the foot of his bed – dressed in a black robe and with very long, black hair. In an instant, Jeff got the feeling the woman was dangerous, almost predatory, he thought. Sleep paralysis prevented Jeff from moving; his heart thumped as adrenalin shot through his body like a tsunami hitting a beach. Echoing the experiences of Albert Bender all those decades ago, Jeff’s room was quickly filled with a sulfurous stench. It took Jeff around fifteen seconds to break the spell of paralysis. When he finally did, Jeff was shaky, light-headed and clammy. He was sure it was no dream. But, it was definitely nightmarish. The foul smell was there through the next morning.

I told Jeff that seeing pterodactyls or pterodactyl-like creatures was actually not that rare, as strange as that might have sounded to him. He looked at me as if I was crazy. I explained that reports of such aerial monsters date back decades, with a significant number of cases reported from the Texas-Mexico border. Indeed, my good mate, Ken Gerhard, has investigated a notable number of such events way down in South Texas. As for that Woman in Black, well, I explained to Jeff the issue of cryptid-creatures being connected to the M.I.B. and the W.I.B. was also not at all rare. I gave Jeff a rundown on the wave of Mothman encounters that descended on the people of Point Pleasant, West Virginia, from late 1966 to December 1967 – and how the M.I.B. and Women in Black were seen lurking around the area, usually at night. The parallels between what Jeff experienced, and what happened in the city of Point Pleasant, were near-identical: a fiend in black, and a winged monster with blazing eyes, appeared. I warned Jeff that might not be the end of it all. It happens that, for Jeff, it was the end. The chaotic couple of days were completely over. For Jeff, that is. Not for me, though. The next afternoon saw me sucked into the maelstrom.

I was working on an article for the guys here at Mysterious Universe when I heard a helicopter go over my apartment. Well, there was nothing particularly strange about that: occasionally, they do fly over the area. Usually, however, it’s when the local news channel is filming a stolen car doing ninety on the local highway. Or, when there has been a particularly bad accident. You get the point, I’m sure. With my mind primarily focused on the article, I didn’t think much at all about the helicopter above. After a few minutes, though, it dawned on me the helicopter had no intention of passing by: its constant sound suggested it was circling. Not only that, it was clearly getting louder, which suggested it was getting closer. We’re talking about the typical and familiar “whup-whup” noise that a helicopter makes. So, with my curiosity now solidly piqued, I stopped what I was doing, shut down the Word document, and went to the door of my apartment. And, then I opened it.

On doing so, I was struck by the sight above me. It wasn’t a helicopter, after all. Rather, it was two of them, flying very closely to each other. I would go so far as to say dangerously close to each other. And, they were not circling in the general area: they were alternately circling and hovering directly over the block of apartments I live in – and at an almost-perilous height. I could have completely dismissed the whole matter as being of no consequence, were it not for one thing: the two helicopters completely lacked any kind of identifying markings. They were nothing less than absolute examples of the legendary "Black Helicopters." So, what we have are a bizarre, flying monster; a Woman in Black;  a case of sleep-paralysis; and a pair of black helicopters. Now, it's possible that all of this came together because of nothing but coincidence. Yet, this sounds very much like the events that went down at Point Pleasant, West Virginia from 1966 to 1967. I am, of course, talking about the classic story told by John A. Keel in The Mothman Prophecies. The city was dominated by the winged monster. Both the Men in Black and the Women in Black came into town. Many of the locals had strange nightmares. The parallels are there to see - even though the events were decades apart. I don't pretend to understand what all of this means; but it surely has to mean something! 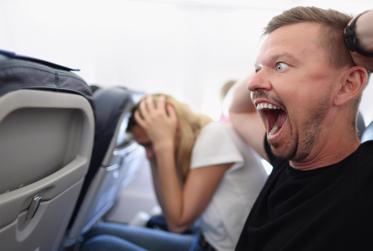 American Airlines Flights Are Being Invaded by Mysterious and Scary Sounds